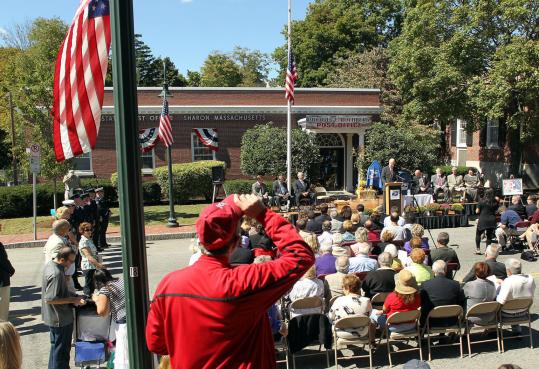 Attendees paused during a moment of silence for Michael C. Rothberg of Sharon, who died on the 104th floor of the World Trade Center on Sept. 11, 2001, in front of the post office that was renamed in his honor. (John Tlumacki/ Globe Staff)
By Matt Byrne Globe Correspondent / September 12, 2010

Putting aside the controversies over Koran burning and a proposal to build an Islamic center near ground zero in Manhattan, people gathered throughout Boston and the rest of the Commonwealth yesterday to reflect on the ninth anniversary of a day that changed America forever.

At a service for the state’s firefighters, which has been held annually on Sept. 11 since a firefighters’ memorial site was dedicated in Boston in 2007, Governor Deval Patrick and several other officials thanked the men and women who gave their lives on 9/11. The governor offered his personal take on the first responders who place themselves in harm’s way to help others.

“It was not for many years that I realized fire fighting is about selflessness,’’ Patrick said to scores of onlookers, some weeping, who gathered there. He echoed the sentiment in a statement about this year’s recipients of the Madeline Amy Sweeney Award for Civilian Bravery, which Lieutenant Governor Timothy P. Murray awarded at a ceremony at the State House.

“These awards honor her legacy by recognizing individuals who put themselves on the line to help others in need,’’ Patrick said in a prepared statement. “I congratulate these four ordinary citizens for being at their best in a time of crisis and reminding all of us that Ms. Sweeney’s spirit is alive and well in the Commonwealth today.’’

Sweeney was a flight attendant on American Airlines Flight 11, which was hijacked and crashed into the North Tower of the World Trade Center. Before the crash, Sweeney, an Acton resident who left a husband and two children, managed to convey to authorities on the ground information about the plane’s five hijackers, according to the governor’s office.

This year’s four recipients — Peter Chenevert, Michael Genest, Jessica Genest, and David Bianco — saved the driver of a crashed sport utility vehicle in Uxbridge on Jan. 26. According to the statement, Chenevert heard the accident and called 911 before he rushed to the scene to help; the Genests and Bianco were passing by and stopped to assist the driver who was pinned inside.

Patrick also attended a wreath-laying ceremony and a commemoration on the State House steps yesterday, and spoke to a group of firefighters and their families at Ashburton Park on Bowdoin Street.

Elsewhere in the state, similar commemorations took place yesterday. The post office in Sharon was renamed for Michael C. Rothberg, who was killed on the 104th floor of one of the Trade Center buildings, said Richard Powell, a Sharon selectman.

“[The Rothbergs are] a really good family who are trying to make something good from something that was a tragedy for them and the whole country,’’ Powell said in a phone interview.

The anniversary of the attacks has become a rallying point for an array of groups and draws more than just commemorative ceremonies. Political and religious leaders have used the day as a platform, which some survivors see as opportunistic.

Terry Greene, whose brother was a passenger on United Flight 93 on 9/11, said in a phone interview that the current controversy over the proposed Manhattan Islamic center and the Koran burning canceled by a Florida minister were hurtful “on a very deep level’’ to her.

“When 9/11 happened, it was in a context where I’ve seen in history before where people have divided themselves and attacked one another believing that was a solution for something, whether using religion or other methods,’’ Greene said. “To me the enemy is not a religion or a group of people, but it is that tendency of people to see one another so readily as enemies and to not focus the kind of resources and attention to bring us together.’’

But in Boston yesterday, the anniversary encompassed initiatives with more altruistic aims. One event in the South End focused partly on quelling what some have said was a dearth of cross-faith understanding and a spike in anti-Islamic rhetoric following the attacks.

At the Blackstone Elementary School in the South End, about 150college-aged volunteers helped improve the school library for an interfaith service day. Speakers representing five faiths spoke to the crowd; each referred to the gravity of the day and urged peace.

Abdullah Ddumba, an imam at the Waltham Islamic Society who was at the Blackstone gathering, said he hopes the anniversary of the attacks can be used as a focal point to renew the relationship between people of divergent faiths in America, some of whom did not understand or know much about Islam before the attacks.

“The perception of the American society now understands who Muslims are,’’ Ddumba said. “We should engage with as many people as we can, not just the people we know, but those we don’t,’’ he said.

Henry Seton, 26, of Cambridge, who spoke representing Christian beliefs, said he was glad to promote service and nonviolence on a day that will be forever marred by tragedy.

“On this day I wonder what would have happened if we would have followed Jesus’ advice and turned the other cheek,’’ he said.

Matt Byrne can be reached at mbyrne.globe@gmail.com.