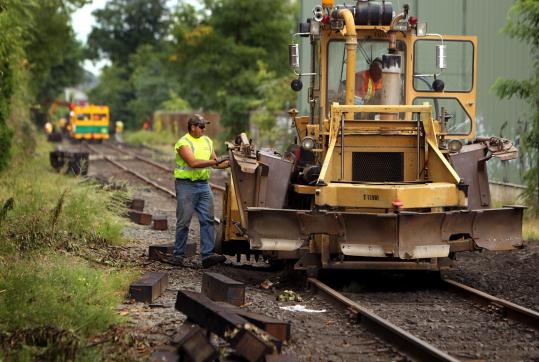 Workers pull up old railroad ties to replace them along the Grand Junction railroad. The work is necessary to bring the tracks up to the standard for passenger rail service. (John Tlumacki/ Globe Staff)
By Eric Moskowitz Globe Staff / September 12, 2010

Early last week, I joined Lieutenant Governor Timothy P. Murray and a trio of transportation officials for a rumbling ride across Cambridge on a little-known railroad called the Grand Junction.

Never heard of it? You are not alone. When I wrote about the Grand Junction a month ago, mentioning a live railroad crossing at Massachusetts Avenue near MIT, one copy editor at the Globe assured me I was mistaken. Others knew the tracks but assumed they had been abandoned.

But the 8-mile Grand Junction — which follows a serpentine path from Brighton to East Boston — is indeed an active freight line, though seldom used. It is one of four properties in the state’s half-complete, $100 million deal with the shipping company to acquire rail lines in Eastern Massachusetts for commuter purposes. And Murray wants to use this piece immediately.

The Grand Junction, a century and a half old, is the only connection in Greater Boston between the train lines that flow in and out of North Station and the lines that go to South Station. It begins at a Brighton rail yard, crosses the Charles River below the BU Bridge, and follows a serpentine path through Cambridgeport, East Cambridge, East Somerville, Everett, and Chelsea before entering East Boston from the north.

Murray, a former Worcester city councilor and mayor, has long been a proponent of running 20 or more commuter rail round trips a day between that city and Boston. (In 1994 there were just three; now there are 12 1/2, with one more inbound than outbound.) But South Station is at capacity, meaning trains already wait to get in and out at rush hour, and the plan to expand it is costly and complex. The Grand Junction would offer a quick way to jump trains on the Worcester/Framingham line across the river, through Cambridge, and toward tracks heading toward North Station, which is not yet at capacity. Murray hopes to do that as early as 2012.

“It’s about [creating] job and economic development opportunities, it’s about doing that in an environmentally friendly way, and about utilizing one of the assets that the Commonwealth possesses,’’ Murray said.

We started our tour on the Cambridge-Somerville border, in the shadow of the McGrath/O’Brien elevated highway, walking south along the tracks toward Kendall Square. Workers from the Massachusetts Bay Commuter Railroad — the company that runs the T’s commuter rail — were in the middle of a three-week, $530,000 project to replace about 3,000 splintering wooden ties on the Grand Junction, clear debris and brush, fix curving and aging rails, and otherwise bring a 10-mile-an-hour-limit freight route up to the standards needed for passenger service.

(Before any Worcester trains run to North Station, about $1.6 million would also need to be invested in a yearlong project to add gates to six road crossings in Cambridge, a project that has not yet been authorized, according to MBTA spokesman Joe Pesaturo. A commuter rail stop in Kendall, something else Murray envisions, would be much further off and require much greater investment.)

After walking among a succession of track workers and heavy machinery — tie handlers, spike pullers, magnetic scrappers — we crossed Cambridge Street and saw the vehicle that would carry us the rest of the way: an extended-cab Chevrolet pickup retrofitted as a Hy-Rail vehicle, with the ability to run on road and rails alike.

Transportation Secretary Jeffrey B. Mullan, MBTA general manager Richard A. Davey, and MBTA director of railroad operations Jody Ray were no strangers to the Hy-Rail, but Murray and I were impressed. It was a far cry from the two-man handcars of old Westerns and cartoons.

“I thought me and Jeff would be going like this,’’ Murray joked, mimicking the up-and-down motion of an old-fashioned handcar.

High-tech as the Hy-Rail was, it lacked power windows. “Old school,’’ Murray said, reaching for the window crank.

“We’re trying to save money wherever we can,’’ Mullan said, deadpan. The Hy-Rail, like much of the T’s track equipment, was purchased with cash acquired by selling old rails and spikes for scrap.

We followed the Grand Junction across Broadway, amid the towering tech buildings of Kendall Square, and again across Mass. Ave., near the massive brick Metropolitan Storage Warehouse, stamped FIRE PROOF in white letters.

In each case we needed the help of flaggers, flashing lights, and ringing bells — because motorists there are unaccustomed to trains passing. (The T and Amtrak use the route occasionally at night to move cars for service; freight trains currently use it just once a day.)

“They really have lost any fear,’’ said Ray, our guide, of drivers who assume the tracks have fallen out of use with the departure of heavy industry in the area. “If the signalman wasn’t standing there right now, people would be driving right through the lights and the bells.’’

We banked right toward Cambridgeport, passing the rear of MIT laboratories, the siding where circus trains still drop off animals once a year for a parade to TD Garden, and a postage stamp of green where cannons are pointed at the track — Fort Washington, now a designated dog park where George Washington had ordered an embankment in 1775.

“Aw, they got Harvard,’’ said Mullan, seated in the middle. “They’re concerned about Caltech.’’

Approaching Memorial Drive, Mullan noted an old assembly plant that was rehabbed in the 1990s as a high-tech hub.

Ahead loomed the Grand Junction’s bridge over the Charles River, crossing diagonally under the BU Bridge. But first, we passed beneath a pair of graffiti-covered overpasses carrying Memorial Drive above the tracks. Half a dozen men sat among tarps and living-room furniture, sharing a midmorning beer by the rails — a hidden encampment that won’t be so hidden if the commuter rail starts running. One of them offered a friendly salute, and Murray waved back, flashing the two fingers of peace and victory.

“How are ya?’’ Murray called, in campaign mode.

“I’m not sure they’ve registered yet, governor,’’ Mullan quipped.

“They’ve got the flag up,’’ Murray said.

“Flag up,’’ Mullan countered. “And Budweisers.’’