THIS STORY HAS BEEN FORMATTED FOR EASY PRINTING
Yvonne Abraham 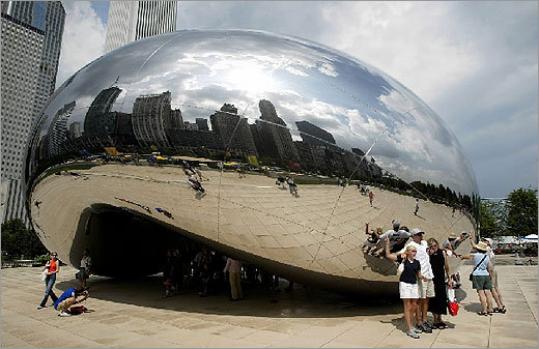 CHICAGO — Why don’t we have a Cloud Gate?

The huge steel sculpture in Chicago’s Millennium Park was mobbed when I visited recently. Tourists stared up at their distorted reflections, or watched clouds slide across the giant bean’s silver surface.

Since it was finished in 2006, the Anish Kapoor sculpture has become a city icon. But it’s just one part of Chicago’s amazing public art collection.There is a Picasso in Daley Plaza, installed in 1967 after Mayor Richard J. Daley — setting a gutsy precedent — demanded a piece by a renowned contemporary artist. Nearby, there are works by Miró, Chagall, and Calder. Each of the pieces is of its time, monumental, ambitious. They stop you in your tracks, take you out of the moment, make you want to come back.

And if you’re visiting from Boston, they also bum you out, because our public art is so lame by comparison.

We’ve got some lovely stuff here, works that might intrigue or delight if you happened upon them. But there’s little you would make it a point to see.

Much of the public art in our historic city is from long ago. We have plenty of figurative monuments and statues, some great: Augustus Saint-Gaudens’ 1897 monument to the Massachusetts 54th Regiment at the Common, for example.

But especially in a proud city like ours, you shouldn’t have to search so hard for evidence that the history of art — and of Boston — continued past the turn of the last century. We have the affecting, confronting New England Holocaust Memorial, by Stanley Saitowitz, unveiled in 1995, Stan Edmister’s lovely painted bridges over the Pike, and a smattering of other modern and contemporary works. But we’ve nothing as ambitious as the works that spur civic pride in Chicago.

All of the exciting stuff around here is happening at the universities — most notably across the river at MIT, which continues to amass a gloriously edgy collection of art and architecture.

Where are our leading corporations in all of this? Where is City Hall?

Chicago mayors have insisted on great public art the way they have insisted on beautiful parks or, to less certain effect, good schools. Since 1978, the city has devoted a portion of the budget for every municipal project to on-site art. (Cambridge is the only city in Massachusetts with anything similar.) Current Mayor Richard M. Daley used his political capital to gather donations to pay for Millennium Park, including Kapoor’s sculpture, which cost a whopping $22 million.

There’s no such political moxie, or vision, in Boston. The city’s Boston Art Commission, founded in 1890, is chronically underfunded. Its director, Karin Goodfellow, is doing a great job of raising awareness, but she hasn’t the resources to make anything new happen.

“There’s no official support,’’ says Ricardo Barreto, director of the UrbanArts Institute at Massachusetts College of Art, a nonprofit group that shepherds public art from inspiration to installation. “It’s an anomaly in the US, especially for a city of this size, in a state with the progressive pretensions of Massachusetts.’’

The problem began before Mayor Tom Menino, but he has the power to fix it. His clear commitment to public art would bring corporations on board, too. If he demanded it, Liberty Mutual could just as easily give the city a work of art, instead of a new park, with its proposed development on the corner of Berkeley and Columbus.

Obviously, art is a hard sell in times like these, a snooty frill when schools struggle and basic services are slashed.

But we whiffed on public art when times were fat, too.

This isn’t just about a giant silver bean. It’s about a lack of boldness that bleeds into other pursuits like architecture and education — a cautiousness that holds us back everywhere.

We can do better.

Yvonne Abraham is a Globe columnist. She can be reached at abraham@globe.com