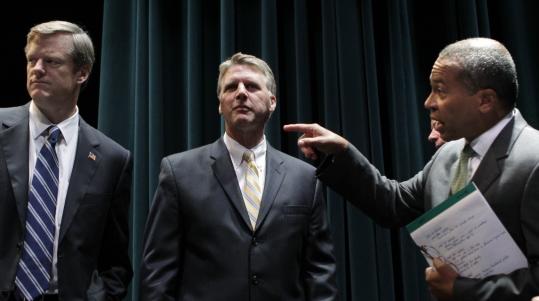 With that question in Tuesday night’s debate, Republican gubernatorial candidate Charles D. Baker set off a furious exchange — which intensified yesterday — over the extent of state help for the health insurance company he took over a decade ago when it faced financial collapse.

The flashpoint occurred when Baker’s Democratic opponent, Governor Deval Patrick, asserted that Baker had improved Harvard Pilgrim Health Care “with the help, by the way, of state aid.’’

Yesterday, officials involved in the restructuring, and others who followed it closely, said Harvard Pilgrim, with Baker as chief executive, got plenty of help from the state but no direct taxpayer subsidies in a deal that pulled the company back from the brink of financial ruin.

“There wasn’t any direct dollars going to Harvard Pilgrim,’’ said Michael J. Widmer, president of the Massachusetts Taxpayers Foundation, a business-backed fiscal watchdog. “The state jumped in because it didn’t want Harvard Pilgrim to fail, and they worked on a turnaround. So, yes, there was a state role, but not state aid. And that is, I think, an important distinction.’’

The recovery of Harvard Pilgrim in 1999 is central to Baker’s contention that he can rescue state government, which is facing an estimated deficit of at least $2 billion next year.

But Patrick and state Treasurer Timothy P. Cahill, an independent, are seeking to undercut his business-turnaround story by portraying it as the result of a government bailout.

In the statement, Patrick aides suggested that Harvard Pilgrim enjoyed an additional $140 million in state help — but they did not note that that deal was never finalized.

Policy specialists say Harvard Pilgrim did receive assistance from the state insurance commissioner and state attorney general when the Commonwealth placed the company into receivership, a dramatic step akin to bankruptcy protection that put the company under state oversight in 2000.

Baker also got help from the Massachusetts Health and Educational Facilities Authority, a quasi-public agency, which issued an $80.9 million tax-free bond in 2002 to help Harvard Pilgrim sell its property in Kenmore Square and lease it back. Under the deal, private investors purchased the bond and assumed the risk.

The Facilities Authority used Civic Investments Inc., a nonprofit entity that it created, to buy the Kenmore Square property and lease it back to Harvard Pilgrim, acting essentially as a “holding entity for some of Harvard Pilgrim’s property,’’ said Robert J. Ciolek, who was the authority’s executive director at the time.

Harvard Pilgrim ultimately spent five months in receivership and remained under limited state oversight until 2006. Discussing the company’s recovery with state education officials in 2002, Baker acknowledged the help he had received from government officials.

“Frankly, many people in state government made a bet on me, and on the organization that I was involved in,’’ said Baker, who was the chief executive from May 1999 until last year, when he resigned to run for governor.

Alan Sager, a professor of health policy and management at Boston University, said Harvard Pilgrim survived as the result of a public-private alliance that gave it “breathing space and the reassurance that state regulators are on the case.’’

“There was certainly a cooperative effort at the time,’’ Sager said.

But he and others said the company did not receive public money, because the bond that helped Harvard Pilgrim was backed by private investors, not the state of Massachusetts.

Sager said that the Health and Educational Facilities Authority routinely helps universities, hospitals, and nonprofits by issuing tax-free bonds but that tax-free status “is accomplished by a [change in] legal status and not a financial subsidy.’’

Thomas F. Reilly, a former state attorney general and a Democrat who helped oversee Harvard Pilgrim when it was in receivership, said he was “astounded’’ that the governor suggested that the company had received state aid.

Baker worked with lawyers from Reilly’s office and state insurance regulators to craft a plan for the company that was ultimately approved by the Supreme Judicial Court.

It led Harvard Pilgrim to lay off 200 of its 4,000 employees over a three-year period and impose premium increases on customers. Baker and his staff also renegotiated provider contracts.

“The Commonwealth of Massachusetts did not put one dime of taxpayer money into the Harvard Pilgrim turnaround. Not one dime,’’ Baker told reporters yesterday.

Baker said his opponents are being dishonest about the help his company received. “We made a lot of really difficult decisions early on, but they were the kind of decisions that needed to be made to save the organization and fix it,’’ Baker said. “And I would argue in many cases those are a lot of the same kind of tough decisions that [state government] hasn’t made.’’