Despite tensions, many hold to their belief in America 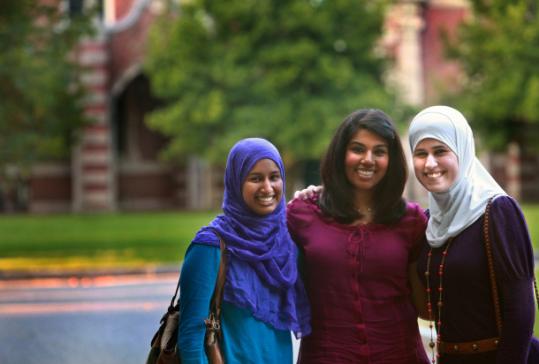 WELLESLEY — Laila Alawa fiddled with her cellphone, pretending she hadn’t heard what an apparently intoxicated man near her on the MBTA had said about “her people’’ wanting to build the “ground zero mosque.’’

Growing up in a large Muslim family in upstate New York and New Hampshire, Alawa had often drawn stares because of her headscarf, and sometimes endured harassment from neighborhood children. But this summer, as she shuttled between research jobs at Wellesley College and MIT, the looks and questions from strangers about where she was from seemed to come more often, and with a sharper edge.

“Every day I wake up, I just really want to put it out there — like, we’re not going to hurt you,’’ Alawa, a 19-year-old Wellesley student, said in an interview last week. “We are normal people, with fears and aspirations.’’

Alawa is one of hundreds of young Muslim students returning to college campuses in the Boston area this week amid tensions surrounding the proposed Islamic center and mosque two blocks from the former World Trade Center site in New York. Watching the controversy unfold over the summer, many felt frustration at what they saw as a growing conflation of terrorism and Islam in America. Some were alarmed at episodes of violence against Muslims, such as the arson at a mosque construction site in Tennessee and the stabbing of a Muslim cab driver in New York.

But as they celebrate the final days of Ramadan amid the rush of choosing classes and reuniting with friends, Muslim students said in interviews last week that they remain optimistic about Americans’ embrace of religious pluralism, even as they deplore what they see as fearmongering by American politicians — as well as the violence perpetrated by radical Islamists abroad.

“I keep thinking about the little acts of kindness people give me,’’ said Alawa, who recalled that, after the man on the train denounced her, an older woman in the next seat turned to her and told her not to listen to him, that it would be all right.

“I just hope that I can give back,’’ Alawa said.

Ramadan, the ninth month of the Islamic lunar calendar, when Muslims believe the first verses of the Koran were revealed to the Prophet Muhammad, is a time of self-discipline and reflection, but also of celebration. The iftar dinners held at many colleges each night to celebrate the breaking of the daily fast showcase the lively Muslim communities flourishing on local campuses.

In Boylston Hall in Harvard Yard last week, more than 100 students attended an intercultural iftar co-sponsored by the Harvard Islamic Society and African, Arab, and Southeast Asian student groups. Just after sundown, they broke the fast by eating dates and drinking water. Prayer followed, then a casual dinner of chicken, olives, and salad.

For many students, the controversy over the Islamic center near ground zero seemed to erupt almost out of nowhere.

Rashid Yasin, an outgoing 20-year-old, said he experienced no discrimination growing up in Scituate, where his was the only Muslim family he knew. When he returned in late August from an around-the-world trip with his a capella group, the Din & Tonics, he was shocked at the news he’d missed.

“At the beginning it was easy to be really angry that there was all this hostility towards my religion,’’ he said. “You think about it more, and it’s tragic, because it comes out of ignorance. A lot of people don’t understand enough about Islam that they can think beyond a superficial level of, ‘Islam is related to terror, Islam is related to violence, Islam is related to the oppression of women.’ ’’

But Yasin said he felt confident that things would settle down. Americans, he reasoned, have overcome prejudice against Jews, Catholics, and other groups in the last century. “I have faith that America will do it again,’’ he said.

Maera Siddiqi, 25, who is studying religion at Harvard Extension School, said she is heartened that the classes she’s taking in Arabic and Islam are packed with non-Muslin students who want to learn about the Islamic world, and yet she hasn’t felt as comfortable praying in public as she did last year. Her husband, Benjamin Thal, 27, thinks of the taxi driver who was stabbed after his passenger asked if he was a Muslim — a question he’s asked many cab drivers himself, in a spirit of comraderie.

At an iftar held at an MIT dining hall last week, several dozen students filled their plates with maklouba, a Palestinian rice dish, and settled down at large tables to chat and eat.

Nabeel Ahmed, a 30-year-old postdoctoral student, said he had been more concerned lately with the flooding in his native Pakistan than the debate surrounding the mosque in lower Manhattan.

“A disaster of that scale is not getting nearly as much attention as it should in the local media,’’ he said.

But Ahmed nor Syed Imaad, a 22-year-old graduate student sitting nearby, said the rhetoric on cable television seemed very distant from their lives at MIT, which they described as a friendly, cosmopolitan place. “It’s all just politics,’’ Imaad said of the controversy with a shrug.

At Wellesley, Alawa and 20-year-old peers Ameera Keval and Maliha Rahman said they had had overwhelmingly positive experiences. They said they appreciated that Wellesley has a Muslim chaplain, educational programs such as “Islamarama’’ week to teach students about Islam, and even special multifaith housing to encourage discussion of religious difference.

Rahman, a pre-med student from Pleasanton, Calif., recalled with a laugh how interested her non-Muslim dormmates were in learning about the ablutions for prayer she performed in their shared bathroom. “It’s even small things like that,’’ she said. She said she’d read that Americans who knew Muslims personally weren’t afraid of them.

“Over time, as people move to different places and integrate more into the community, this will go away,’’ she said.

Keval, a junior at Wellesley, was raised in California and Amman, Jordan, where her father serves as a lieutenant colonel in the US Air Force. She remembers how she felt sitting in class at her Montessori school in California on Sept. 11, 2001; her dad was at the Pentagon that day.

When she hears Islamic extremists abroad advocating violence, she said, “it scares me, too.’’

Keval wants to be a diplomat, and maybe even run for president one day — a dream she does not see as impossible, even now.

“I don’t know if that’s being naive or childish,’’ she said. “I still have faith in America, and in Americans, I really do.’’

Alawa says she makes a point of trying to meet strangers’ stares with a smile, even when she feels like crying instead. She has become passionate about doing community outreach work through the Muslim American Society’s Boston chapter. And she has joined a Facebook group her friend started to encourage Muslims and their friends to send “The Daily Show’’ host Jon Stewart a present for Eid, which marks the end of Ramadan, for his “sane, honest, and hilarious’’ coverage of the mosque controversy.

“I’m planning on getting him flowers,’’ she said.

And Farhan Murshed, 21, a Harvard senior studying neurobiology, said the controversy has been in many ways inspirational. Mayor Michael Bloomberg of New York, who has supported the Islamic center project despite popular opposition, has become a new hero to Murshed, a native of Bangladesh who said he grew up “between worlds’’ in Australia, Canada, and then Troy, Mich.