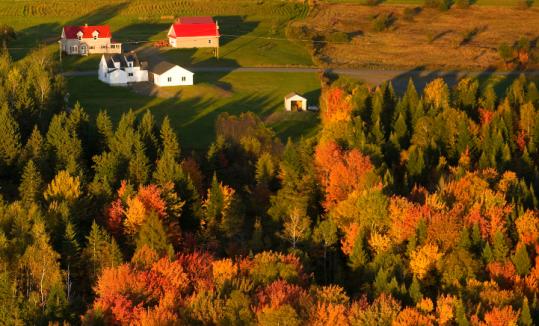 The brilliant colors of fall in New England will be visible earlier this year due to the hot, dry weather. (Dina Rudick/Globe Staff/File 2009)
By Kathy McCabe Globe Staff / August 30, 2010

Adrienne Kieldsing revels in New England autumns, when leaves turn glorious shades of yellow, orange, and red. But she did a double take during her commute along back roads from Lowell to Westford earlier this month, when she spotted colorful patches breaking out in the maples.

“I’ve really noticed it coming sooner this year,’’ said Kieldsing, 32, an air pollution meteorologist, who also contributes to a foliage blog published by Yankee magazine. “It [arrived] about a month early, but some of the colors are brilliant.’’

The hot, dry summer has caused foliage to turn color earlier than usual in northern New England. Although popping up on only a few trees, bursts of yellow and orange have already turned heads in a region basking in 90-degree summer days.

“They’re like little kisses on the trees,’’ said Lisa Lee, the market manager at Applecrest Farm Orchards in Hampton Falls, N.H. “It’s just little brushes of orange, but you can see, the foliage is starting.’’

Warm, sunny days with no extended periods of rain is probably the reason some colors are peeking through.

“It’s the drought,’’ said Matthew Kelty, a professor of forestry at the University of Massachusetts Amherst. “Even though there have been spurts of heavy rain here and there, overall it’s been one of the driest summers in about 25 years.’’

Greater Boston had a total rainfall of 2.66 inches in July, just 0.4 less than normal. August so far has yielded 5.75 inches, much of it due to four straight days of heavy rain last week. The lack of steady rainfall throughout the summer made for drier than normal conditions.

“Many factors go into a drought,’’ said Bill Simpson, a meteorologist at the National Weather Service in Taunton. “In this case, inconsistent rainfall and high temperatures probably weakened some trees.’’

The early colors result from a lack of moisture to help them stay green. Shorter days in fall and cold nights also facilitate the loss of green pigment, chlorophyll, helping to bring out yellow and red. But with summer still in full bloom, only leaves that already were weak have turned color early, said Kelty, the UMass professor.

“The leaves don’t have enough water, so they’re dying prematurely,’’ Kelty said. “They normally would have lived for three weeks into September.’’

With only small patches of leaves turning color, Kelty predicts that peak fall foliage will not come until early October.

“People are worried that something odd is happening,’’ Kelty said. . “But it’s only here and there that you see part of a tree turning color. When I look out at a tree [now], it’s mostly green.’’

Some folks have not noticed the tiny signs of fall blending into the summer landscape.

“I don’t think people are aware that the foliage is going to be earlier yet,’’ said Irene Stevens, owner of Stevens Farm Bed & Breakfast in Barre.

Still, the early indicators of fall have sparked the imagination of tourism businesses as they gear up for Labor Day.

“It’s our last big weekend of summer,’’ said Richard Garabedian, owner of the Crawford Notch General Store & Campground, in Twin Mountain, N.H. “In September, it will start to moderate, but once the colors come out, we’ll be going strong.’’

The hot, dry conditions have also led some farm crops to ripen ahead of schedule. Applecrest Farm Orchards will launch its fall apple-picking season this weekend.

“The leaves changing definitely give people a hint of what’s to come,’’ said Lee, the market manager.

The Greenville Inn, at the base of Moosehead Lake in Maine, hopes a colorful fall draws more hikers and bikers.

“We have a lot of people, right up until mid-October, who want to see foliage,’’ said Terry Johannemann, owner of the 14-room inn.

But she said foliage is fickle. “It’s really impossible to predict what the foliage is going to be like. It’s an imperfect science.’’

Globe correspondent Emma Stickgold contributed to this report. Kathy McCabe can be reached at kmccabe@globe.com.