All summer, a local foundation has made good times in these hard times a whole lot easier to afford 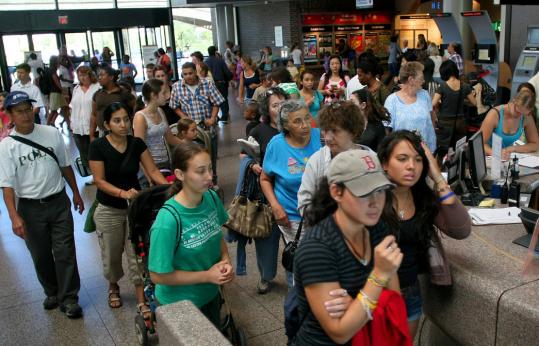 Like legions of the newly unemployed, Janet Schwartz has had to nix nearly all nonessential expenses: dinners out, help around the house, anything that requires her to spend what little money she has.

In Boston with friends on a recent Friday night, the single mother from Westborough who lost her corporate training job last winter decided to splurge and take her daughter to the Institute of Contemporary Art, prepared to pay the usual $30 total for two adult tickets.

When they arrived, they learned, to their delight, that there was no charge for admission. “I’ve just become sick of not doing things we want to do,’’ she said. “It was a huge relief. It really meant a lot to us.’’

The Schwartzes are among tens of thousands of people who have benefited from a program sponsored by the Highland Street Foundation that has subsidized ticket prices at museums and other cultural venues statewide for the past two summers.

As part of an effort to help those in need at a time of economic crisis, as well to mark their 20th anniversary, the Newton-based foundation decided last summer to underwrite the price of admission for a different institution each Friday for 10 weeks. Given the program’s success, they increased the number of museums and other venues to 26 this summer.

As word spread, many of the institutions have seen a record number of visitors come through their doors on the free days this summer. The Franklin Park Zoo, for example, had 17,230 visitors when they opened for free on July 9, their largest day ever. Old Sturbridge Village also had a record day with 11,071 visitors when they opened for free on Aug. 13. The Museum of Fine Arts had their highest attendance in 10 years, and Plimoth Plantation had twice as many visitors as their largest Thanksgiving.

“We wanted to help people do things that in tough economic times they would likely choose not to do,’’ said Blake Jordan, executive director of the Highland Street Foundation, which uses its $170 million endowment to help those with low incomes.

The foundation was established in 1989 by David J. McGrath Jr. and, according to its website, received the majority of its endowment from the sale of his company, TAD Resources International Inc., after McGrath’s death. His wife, JoAnn, and her five children, now make up the board. Since its establishment, the foundation and the family have donated more than $112 million to many nonprofit organizations, including $86 million to groups in Massachusetts.

Its statewide Free Fun Fridays program, in particular, has been very popular.

“We were amazed by the response,’’ Jordan said. “We thought there was a need for it, but none of us expected it would be such a success.’’

This summer’s program began in June with the Boston Children’s Museum, which admitted 7,351 people, more than double the same Friday in June 2009, when tickets cost the usual $12. The program ends over Labor Day weekend, when the 16 remaining institutions, including the Berkshire Museum, the Cape Cod Children’s Museum, and the USS Constitution Museum, are scheduled to host free days.

“It was a fabulous turnout,’’ said JoAnne Baxter, director of marketing and public relations at Boston Children’s Museum, adding that the free day they held last summer had the highest attendance since the museum was renovated in 2007. “I think it’s fair to say it made a really big difference to every one of those people who came.’’

For Old Sturbridge Village, a re-creation of a community from the 1830s, it was a good way to bring back those who had not visited since childhood.

“It was a great opportunity to reintroduce the village to a lot of people who hadn’t visited since they were here on a field trip in the fifth grade,’’ said Ann Lindblad, a spokeswoman for the Village, which normally charges $20 per adult ticket. “We also saw a lot of people who had not visited before, which we really appreciate. We hope they’ll come back.’’

At the Franklin Park Zoo, this summer’s free day drew about 3,000 people more than their last record, which was a special event the city sponsored several years ago that kept the doors open through the evening.

“The program’s great for us in a number of ways,’’ said David Hirschberg, vice president of the institutional advancement of Zoo New England, which runs the zoo. “It’s a great way to introduce people to the zoo, and for them to see all the new things we have to offer.’’

The program helped make it a rewarding summer for Valerie Parks, her husband, and their four children. They said they would have otherwise not been able to afford the $28 tickets at Plimoth Plantation.

“It’s great to be able to spend time with your family and not have to spend the money,’’ said Parks, 44, a kindergarten teacher from Randolph who has also taken her family to the zoo and to a cruise on Boston Harbor, which was so crowded they were given a free pass to return another day. “I really do hope this continues.’’

At the Museum of Science, which ordinarily costs $21 a ticket for adults and $18 for children, throngs crowded the lobby yesterday on their free day. Merlisha Christmas brought her two young cousins in from New York.

“We would have never been able to afford this if it wasn’t free,’’ said Christmas, who is studying to be a teacher.

Earlier this month, the Institute of Contemporary Art attracted nearly 2,500 people, or double the same Friday last year. Scores of visitors gawked at the sprawling views of the harbor and pondered an exhibit of tattoo-inspired drawings on 1950s pin-ups and Kewpie dolls.

Michelle Siegal brought a friend after she learned about the free day from a blog.

“I’d never been here before,’’ she said. “This was just a good excuse to do something I would have not ordinarily done.’’

Today, McGrath’s wife, JoAnn, and her five children, who make up the foundation’s board, continue the traditions she started with her husband. Since its establishment in 1989, the McGrath family and the Highland Street Foundation have donated more than $112 million to many nonprofit organizations, including $86 million to groups in Massachusetts. Blake Jordan, the foundation’s executive director, says it uses its $170 million endowment to help low-income people.