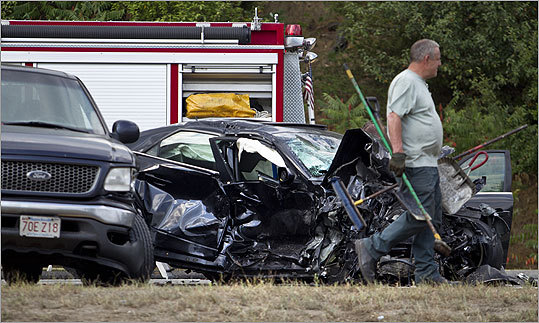 LEXINGTON, Mass.—Police say a 33-year-old Gardner woman driving a compact car on Route 2 eastbound in Lexington is dead after she veered into the westbound lanes, crashing into three other vehicles.

Four other people were injured, including two drivers with serious injuries.

State police said Shannon Gwiazda suffered fatal injuries and was pronounced dead at the scene of the accident that occurred just after 2 p.m.

Those who suffered serious injuries include 47-year-old Gina Ashe of Harvard and 51-year-old Theresa Lamoureux of Maynard.

Authorities are still investigating the facts and circumstances surrounding the crash.

© Copyright 2010 Associated Press. All rights reserved. This material may not be published, broadcast, rewritten, or redistributed.
More articles in Mass.