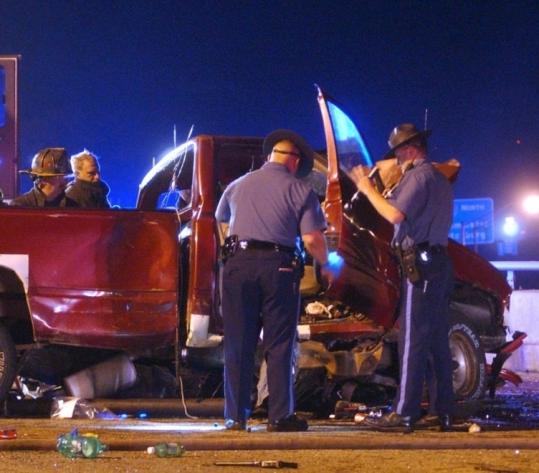 Police are investigating the possibility that a young woman who died in a crash on Interstate 495 in Haverhill early yesterday morning was texting while driving when the accident occurred.

And in another fatal accident early yesterday morning, speed appeared to be a factor in a head-on collision on Interstate 190 in Worcester that left the drivers of the two vehicles dead, and a passenger in serious condition, according to police.

In Haverhill, Kelsey A. Richardson, 21, of Atkinson, N.H., was traveling in the northbound lane just before exit 51 when her 2000 Oldsmobile Intrigue hit the high-speed lane guardrail, spun into the right lane and hit a tractor-trailer, according to a police statement. Richardson was ejected from her vehicle and then struck by another tractor trailer, the statement said. She was pronounced dead by emergency workers who arrived at the scene just after 4:15 a.m. Police could not determine whether she was wearing a seat belt.

But witness statements and the preliminary investigation indicated that Richardson may have been using her cellphone at the time of the accident, according to police. Sergeant Matthew Murray of the State Police said police are trying to determine whether she was texting when the crash occurred.

Denise Georgoudis, a friend of Richardson’s family, said she found that hard to imagine. “I wasn’t with her,’’ she said. “But I would be really surprised if she was, because she would know better. She is very responsible.’’

Richardson, the daughter of Donald and Donna Richardson, of Atkinson, graduated this spring from Northern Essex Community College with a degree in criminal justice.

She was planning to continue her studies at the University of Massachusetts Lowell in the fall, Georgoudis said, with support from two scholarships. She was living with her parents and working as a nanny for a local family this summer.

“She was the baby of the family and she was treated like a princess — she was loved very much,’’ she said.

And Richardson adored her family.

“She was very upbeat, fun-loving,’’ she said. “She loved hanging out with her brothers, her family, her nieces and nephews — that was the biggest part of her life.’’

Richardson graduated in 2007 from Timberlane Regional High School, in Plaistow, N.H., where she was a member of the soccer and softball teams.

In the Worcester crash, Ashley Hannan, 23, of Worcester, was driving south in the northbound lanes of Interstate 190 after 3 a.m. when the 2005 Chevrolet Equinox she was driving collided with a 1990 GMC Sierra pickup truck driven by Thomas Serewicz, 23, of Fitchburg, just past exit 1, Murray said.

Both drivers were pronounced dead at the scene.

State Police are still investigating why Hannan was driving against traffic and will examine evidence from the scene and results of toxicology tests. Speed may have also have been a factor in the crash, Murray said.

A passenger in the pickup, Stephen Larson, 25, of Worcester, was seriously injured in the crash and was transported to the University of Massachusetts Medical Center in Worcester in critical condition.