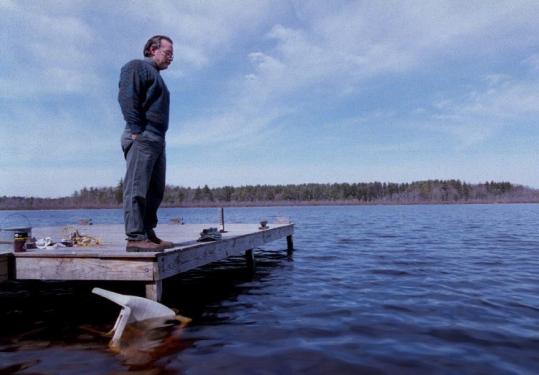 After almost 10 years of striking out in his search of a local pond for what could be Babe Ruth’s piano, a Sudbury man thinks he is getting closer to hitting a home run.

Kevin Kennedy has been on the case for about 10 years, since he moved close to Willis Pond, where the famous pitcher owned a cabin. According to legend, Ruth pushed the piano onto the frozen pond in 1918 during a party.

On June 20, a team of divers looking for the instrument recovered a 6-square-foot piece of wood, which Kennedy says came from a piano.

“We didn’t think it was anything,’’ Kennedy said. “It just looked like plywood.’’

Not so, said a Littleton piano craftsman when Kennedy showed him the wood.

“He said it was the veneer of a piano,’’ said Kennedy, 51. “I took it to him three times because I couldn’t believe it.’’

For a second opinion, Kennedy took it to a West Concord wood expert, who told him it was piano veneer before he could ask.

The veneer is very fragile and has split into about eight pieces since being taken from the water, Kennedy said. It is one-eighth of an inch thick.

The veneer is now under the stewardship of the Sudbury Historical Society at Town Hall, where it is stored in water in a lightproof case, said Lee Swanson, curator and archivist for the historical society.

The possibly historic veneer will not be on display because it is delicate, Swanson said.

“It’s been like a detective story the whole time,’’ Swanson said. “It was very unusual. You don’t find large, flat pieces of wood underwater like that.’’

The rest of the piano, or what is salvageable at least, may not be far behind, Kennedy said. His diving team has found — but not yet removed — a large metal object in the pond. Kennedy believes it’s the piano’s harp.

Kennedy said it is in the exact location where two local men, Steve and Charlie Barry, told him they tipped a decaying piano into the pond around 1973. Kennedy believes it could be Ruth’s piano.

“Could it be a block of an engine? I don’t think so, but I want to find out,’’ Kennedy said. “This story is profound for a lot of people. It inspires the imagination.’’

Kennedy said he is seeking an archeological diver to help remove the object without damaging it.

With the object’s location pinpointed, Kennedy said he wants to extract it this summer, before someone else does.

If the object is the harp, Kennedy says he plans to restore it, put it in a new piano box, and give a final swan song to the Babe.

Christopher J. Girard can be reached at cgirard@globe.com.