Romney picking up where he left off, courting GOP stars 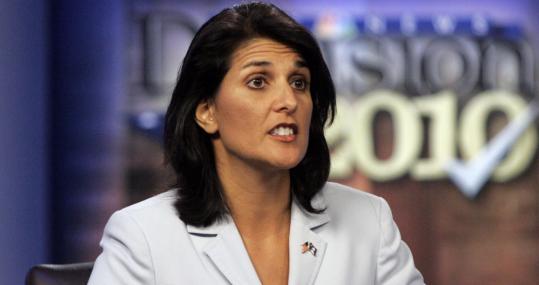 Nikki Haley, a Republican gubernatorial candidate from South Carolina, has been getting plenty of support from Mitt Romney, a possible presidential contender for 2012. (Mary Ann Chastain/Associated Press)
July 11, 2010

Mitt Romney, the probably-maybe-could-be presidential contender again in 2012, continues to court bold-faced names in the Republican Party, as he did so successfully during the last go-round.

This time it’s a young, rising star and darling of the Tea Party movement, who just happens to be from a key presidential primary state.

Romney and his former lieutenant governor, Kerry Healey, were scheduled to host a fund-raiser yesterday for Nikki Haley, the Republican candidate for governor of South Carolina, at Healey’s home in Beverly.

Romney has strongly backed Haley, who has generated considerable buzz in political circles, campaigning for her in South Carolina last month and showering her with more than $40,000 in donations from his political action committees.

“Governor and Mrs. Romney have been tremendous assets to our campaign,’’ said Rob Godfrey, a Haley spokesman. “They stepped up for Nikki when it was still, as she says, ‘Nikki who?’, and they campaigned with Nikki, provided encouragement, advice, and financial support. We continue to be grateful for everything they’ve done.’’

As Romney knows so well, it’s the kind of investment that could pay off handsomely down the road.

For this gubernatorial candidate, it’s been one thing after another
It was just about the last thing Timothy P. Cahill needs right about now.

Cahill, the state treasurer and independent candidate for governor who is struggling to keep pace in the contest, had his wallet and GPS device stolen from his car, after leaving it unlocked in the driveway of his Quincy home on June 30.

The independent candidate for governor told the Patriot Ledger newspaper that he didn’t lose much money but there was a campaign sticker on the purloined wallet.

“Whoever stole it, if they know politics, they know exactly who they stole it from,’’ he told the paper.

Unlike the Watergate break-in, however, the theft doesn’t appear to be the work of any plumbers or political goons. Cahill said he has no one but himself to blame.

“I was coming home late after a long day, and just sort of let my guard down,’’ he told the Ledger. “I live on a nice quiet residential street, so I didn’t think I had to [lock it], but I should have.’’

There is some good news here for the candidate, who has been taking fire from all sides in the governor’s race. At least he won’t have to wait in those dreaded lines at the Registry of Motor Vehicles: Someone mailed his driver’s license back to him.

Tweet of the week
It was a rough week, weather-wise, for many of us, what with the thick, muggy air and the oppressive heat. Not a great week to be a candidate for office, which Lieutenant Governor Tim Murray (@TimMurray2010) found out the hard way. Murray was hospitalized for two days, after overexerting himself in parades over the busy holiday weekend. But he’s back on the job and back out on the trail, with planned stops on the North Shore today. Murray tweeted on Wednesday, “Thanks to all for the outpouring of support and well wishes over the past 40 hrs. Looking forward to getting back to work.’’