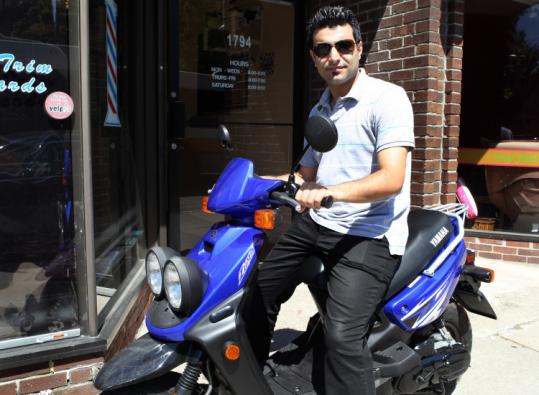 Melhem Berkachi says he was not told his Yamaha Zuma scooter required a license plate when he bought it last week. (Kayana Szymczak for The Boston Globe)
By Peter DeMarco Globe Correspondent / July 5, 2010

The Registry of Motor Vehicles is going after hundreds of scooter owners, threatening to revoke their registrations unless they put license plates on their vehicles within 30 days.

Nearly 350 bike owners are expected to receive warning letters this week. But according to a Globe review, 10 times that many scooter owners — 3,500 — could potentially be in violation of the state’s year-old “limited-use’’ vehicle law.

That law requires speedier scooters, ones that can travel between 30 to 40 miles per hour, to be classified as limited-use vehicles and thus have license plates and insurance. Slower bikes are classified as mopeds, which do not require license plates or insurance. Bikes that can go faster than 40 miles per hour are considered motorcycles, which require plates and insurance.

Historically, the Registry has approved all scooter applications based on the honor system.

The same policy has held true for limited-use vehicles since the category was created by law last Aug.1: If a bike owner or bike dealer said a scooter couldn’t go faster than 30 miles per hour, it was automatically classified as a moped, and no further inquiry was conducted.

But a Globe analysis of registration data shows that at least 500 scooter owners — beyond the ones receiving letters — have inaccurately registered their bikes as mopeds. And another 3,000 scooter owners failed to specify model names or numbers of their bikes, which would tell the Registry how fast their vehicles go. Their applications were approved nonetheless.

Prompted in part by the Globe’s request to see that registration data, the Registry went back and cross-checked thousands of moped registrations against a list of scooters that are known to travel at least 30 miles per hour, identifying 344 violations at first look.

The fine for operating an unregistered vehicle is $100.

Some scooter owners may have registered their bikes as mopeds because they were confused or uninformed about the limited-use law, which creates a middle category between mopeds and motorcycles to allow police greater control over such bikes. Prior to that change, for decades, all any small-engined scooter needed was a tiny moped sticker, renewable every two years, and no insurance.

In other cases, scooter owners may have lied when registering their vehicles to avoid getting plates. Dozens of scooter owners protested last July as the limited-use law was being enacted, stunned by the sudden requirement that many of the most popular scooters on the market — Vespas, Hondas, and Yamahas — have plates, making them targets for parking tickets when they are left on sidewalks.

Boston officials maintain they aren’t ticketing scooters with plates — either motorcycle or limited use — parked unobtrusively on sidewalks, but rules vary community by community.

Some owners say they were misled by scooter dealers, who failed to tell them that the scooters they’re selling require license plates, even though such notification is required by the attorney general’s office and the Massachusetts Consumer Protection Act.

Arlington resident Melhem Berkachi said he wasn’t told that his Zuma scooter required a $50 license plate when he purchased it last week.

“The salesman told me, ‘License plate or sticker. It’s your call,’ ’’ Berkachi said. “I said that I wanted to park it on the sidewalk. So he said, ‘Get a sticker.’ ’’

Berkachi said his dealer handled all the paperwork, obtaining a moped sticker for him, even though his vehicle can reach 35 miles per hour.

Kai Pradel, a scooter activist from Cambridge who was at the forefront of last summer’s protests at the State House against the limited-use law, said the Registry should shoulder blame as well for approving thousands of incomplete or inaccurate moped registrations over the past 11 months.

Nearly 40 percent of applicants who’ve registered a scooter since last August left blanks on their registration forms when asked for model names and numbers of their bikes, but had their applications approved anyway.

“How can they accept those registrations? It’s kind of like you’re filling out your license renewal and you’ve forgotten to write in your birthdate,’’ said Pradel, who owns a Vespa scooter that qualifies as a limited-use vehicle.

Dufresne said that it has taken the Registry time to come up to speed with the new law, in part because of the dizzying array of scooters on the market. Some scooters have two, if not three, names, particularly foreign models. And manufacturers often fail to list how fast a scooter can go.

Dufresne said the Registry is not to blame for registration errors, and that registration forms clearly state what is and is not a moped.

“We rely on the veracity of the owners’ statements for processing a registration with any vehicle,’’ she said. “I think we make that particularly clear on all our applications. With our moped application, we ask [twice] if the vehicle meets the speed requirements.’’

Registry clerks recently have been instructed to reject incomplete registration forms and have been provided a list of scooters that should be classified as limited-use vehicles, information that will allow them to reject improper registrations on the spot, Dufresne added.

Pradel questioned who would be going after scooter owners who refuse to get plates on their vehicles after receiving a warning.

“The police are not going to drive up and down the streets of Boston looking for scooters to tow,’’ Pradel said.

Dufresne said the Registry may send out warnings this summer to more scooter owners who are in clear violation of the law, but has no plans to contact all 3,000 scooter owners whose registrations were incomplete.

“We have to be realistic about what we can and cannot do,’’ she said.

Peter DeMarco can be reached at demarco@globe.com.