Fathers back bill on rights of parents 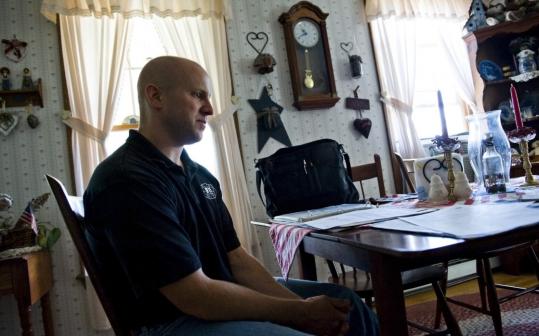 Brian Ayers of Brookfield wants to have more time with his 14-month-old son. (Nancy Palmieri for The Boston Globe)
By Brian MacQuarrie Globe Staff / July 5, 2010

Brian Ayers of Brookfield, a part-time police officer who juggles two jobs, is the proud father of a 14-month-old son. He gazes lovingly at a photograph of himself with his son, talks excitedly about their recent trip to a hot-air balloon festival, and says he wants to build the same kind of close relationship he enjoys with his father.

But Ayers, whose former girlfriend discovered she was pregnant after they broke up, does not share joint physical custody of his only child. And this status, he argues, is one of many examples of how fathers in Massachusetts face discriminatory obstacles in custody decisions.

“I was very upset,’’ said Ayers, 30. “I thought, in this country, you wouldn’t have to necessarily fight to spend time with your own child.’’

That struggle, according to fathers’ rights groups, is a product of a Massachusetts probate system that they say tilts physical custody of children to the mothers. As a result, they are championing a pending House bill that would begin each custody case with a presumption that fathers and mothers are entitled to equal amounts of time with their children. “What we have right now is essentially a maternal veto’’ over joint physical custody, said Ned Holstein, executive director of Fathers & Families, a national advocacy group based in Massachusetts. “We don’t understand why mom should have a veto over what is in the best interests of children.’’

James Edwards, a family-law attorney who represents the mother of Ayers’s child, said the custody settlement signed by both parents is relatively generous in the parenting time granted to the father. Ayers cares for his son every other weekend and has other sleepovers and meals built into the agreement.

But to Ayers, who said he could not afford to go to trial to seek equal time with his son, such a right should be the norm unless evidence shows otherwise.

The fathers’ rights movement has made its way into the 2010 election, as three candidates for the Governor’s Council, which votes on judicial nominations, are members of The Fatherhood Coalition of Massachusetts.

Joe Ureneck of Dorchester, one of the candidates, said fathers’ rights is the “underlying foundation’’ of his candidacy.

“Generally, you have men who have a very hard time in the courts, who want to be involved in their children’s lives, and have a hard time in playing the role of the father,’’ Ureneck said.

However, organizations that deal with women’s and children’s issues say there is no such thing as a maternal veto. And if the bill became law, officials in these groups argue, judicial discretion would suffer, less attention would be paid to the specifics of each divorce, and children might be subjected to more acrimony.

“If the world were a perfect place where everybody was just able to get along and put their differences aside, we might have a different lens on this,’’ said Nancy Allen Scannell, director of policy and planning for the Massachusetts Society for the Prevention of Cruelty to Children, which opposes the bill. “But we all know the reality of what happens.’’

“The MSPCC’s position is that we emphasize a look at families from an individualized perspective,’’ Scannell said.

The bill is opposed by the Massachusetts chapter of the National Organization for Women. “I think it’s an unnecessary step,’’ said Christina Knowles, state director of NOW. “I think judges explain their decisions anyway. It seems redundant.’’

Thomas Barbar, cochairman of the Massachusetts Bar Association’s family law section council, said custody cases are often so thorny and nuanced that judges, with the help of mediators and the attorneys, usually take considerable time to decide.

“What I’ve noticed,’’ Barbar said, “is the court tries to make sure that the kids are spending time with each parent and nobody is being prejudiced. They try not to make decisions rashly.’’

But in Holstein’s view, judicial perspective would be enhanced by the shared parenting bill. Under its terms, judges would be required to explain their decisions in writing if they deny joint physical custody.

The bill, filed in 2008 by Representative Colleen Garry of Dracut, is being considered by the joint Judiciary Committee. A committee aide said the panel has a July 13 deadline to take action on the bill, but an extension might be requested.

Ayers said he became active in the fathers’ rights movement when a lawyer told him he would need a minimum of $15,000 in legal fees to seek joint physical custody in court.

“In the probate court, you’re guilty of being a deadbeat dad the minute you walk through the door,’’ he said. Ayers, who said he pays $320 a week in child support and lives in his parents’ basement, added that he has a clean criminal record and has never been the subject of a restraining order.

But in this case, Edwards said, the mother’s argument for sole physical custody was aided by the child’s status as a newborn, her occupation as a nurse, and third-shift work that enabled her to care for the baby during the day. Ayers, however, insisted he has been treated unfairly.