A matter of function 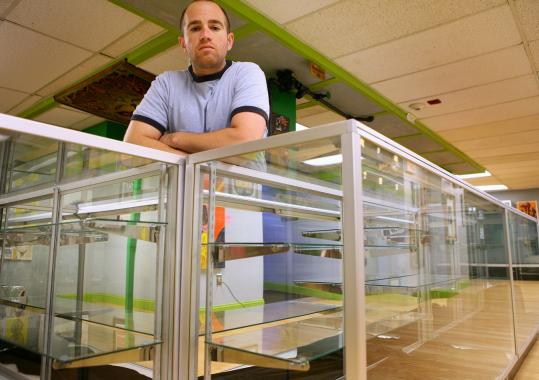 Mattew Yaffe had no glass pipes to display at Green Side Up Gallery in Allston, recently raided by Boston police. (Wendy Maeda/ Globe Staff)
By Maria Cramer Globe Staff / July 5, 2010

Matthew Yaffe calls the colorful glass pipes he sold in his Allston store “functional art.’’ He describes his shop, where some pieces fetched up to $5,000, as a “glass gallery.’’

Boston police, however, see Yaffe’s artwork differently. They call the glass objects pipes for smoking illegal drugs, and they have charged Yaffe, 32, of Milford, with peddling drug paraphernalia from his shop.

The police raid on his Green Side Up Gallery was one of three since April in Allston, where police have been cracking down on so-called head shops, stores that sell pipes and rolling papers that can be used to smoke marijuana.

The busts were well planned. Officers took photographs of the shops before making their arrests, and interviewed North End tobacconists to bolster their argument that the Allston shops were selling drug paraphernalia.

“We’re not looking to put anyone out of business [who is] running a legitimate business,’’ said Captain James Hussey, who runs the Brighton district. “These places were set up, it appears, just to sell drug paraphernalia.’’

Lawyers for those arrested say the shops were licensed by the city and state to sell the products, and police had no basis for shutting down the shops. But Hussey said two of the shops — neither of which belonged to Yaffe — did not have proper licenses displayed.

Business leaders in Allston, a neighborhood popular with college students and graduates, said they are dismayed by the hard line authorities took.

“Very draconian,’’ said Bob Webber, president of the Allston Board of Trade and owner of Model Hardware. “Troubling to me is that these places were licensed by the city. It was almost like they got the green light, and shortly after opening they got blindsided.’’

After Yaffe’s arrest, Hussey met with Webber and other business leaders at the police station, where Hussey said he would try to come up with guidelines for other glass pipe sellers in the neighborhood who are nervous they could be raided.

The dispute between the business owners and police centers around the state law against drug paraphernalia, which can include bongs and pipes, but also blenders, balloons, and even spoons. The law, however, stipulates that authorities should consider various factors before deciding that such equipment is being used illegally. For example, police should weigh expert opinion on the objects, as well as whether they were found near drugs or had drug residue on them .

“The law is very clear that none of it is illegal unless the person sells it knowing that it will be used to ingest a controlled substance,’’ said Yaffe’s lawyer, Joshua Krefetz. “They have to show that he knew someone was going to use one of his products for drugs and then they have to show that he sold it to that person. . . . That person doesn’t exist.’’

Hussey said detectives found no drugs in any of the stores, but he disputed Krefetz’s interpretation of the law, noting that in one shop, detectives found a gas mask with a bong — a filtration device used for smoking — attached to it.

“I just don’t understand what that would be used for other than inhaling drugs,’’ he said.

Hussey said the crackdown was sparked in April, when a Brighton officer stopped by the Wild Side smoke shop on Harvard Avenue, saw the wares, and learned the business did not have a proper permit on display.

Detectives came by a few days later and saw products, in addition to the gas mask, “that jumped out at them as things that aren’t sold in the normal course of business,’’ Hussey said.

On April 30, they arrested one of the store’s employees and seized hundreds of pipes and bongs.

Mark Freeman, who is representing the employee, said the store had all the proper permits, and that the employee was not charged with a permit violation.

Hussey said the raid on Wild Side prompted police to look around the neighborhood for other alleged violators.

“After doing this, [detectives] said, in fairness, let’s make sure there is no place in the area doing something similar,’’ Hussey said.

So about two weeks ago, detectives from Brighton entered Yaffe’s Harvard Avenue shop and took him away in handcuffs.

“I was shocked,’’ said Yaffe, who opened the store about nine months ago. “Cops came in and said, ‘We’re closing you down.’’’

According to an affidavit attached to the warrant to search Yaffe’s store, detectives consulted with two North End tobacconists four days before the Wild Side bust.

“Detectives . . . learned that there is no legitimate purpose for nonconventional pipes such as glass or porcelain pipes, stone pipes, ‘bongs,’ or like devices,’’ the affidavit read. “Such items would normally be used with illegal narcotics.’’

Stephen Willett, owner of L.J. Peretti Co., one of the North End tobacconists referred to in the affidavit, said he does not recall speaking to any detectives. But he did not dispute the affidavit’s characterization of glass pipes.

“Everyone knows what they’re used for. We all went to college. It’s not a mystery,’’ said Willett, who is 59. “I don’t take any umbrage with that. I believe in personal liberty. I would like marijuana legalized so that I can sell it.’’

In Massachusetts, possession of small amounts of marijuana has been decriminalized, but possession and distribution of drug paraphernalia remains a crime.

Yaffe said he refused to sell to anyone who said they wanted the pipes for drugs. Customers usually bought the pieces to smoke legal herbs for spiritual rituals, he said, or to decorate their homes.

And DJ Lawton, who owns The Joint, which was raided in May, said he sold pieces valued at up to $15,000.

“I’ve literally lost hundreds and hundreds of thousands of dollars since this debacle,’’ said Lawton.

He said he wants to open another shop in Allston, but it won’t have glass pipes.

Instead, Lawton said, “I’m getting into the food business.’’