New state law spells it out: No texting while driving

Cellphone use banned for under-18 drivers 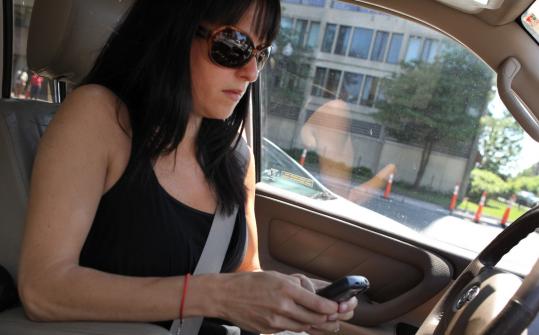 Personal concierge Chantal Boxer, tapping away at a red light, hopes to break her habit of texting while behind the wheel. (Kayana Szymczak for The Boston Globe)
By Michael Levenson Globe Staff / July 3, 2010

Governor Deval Patrick yesterday signed into law legislation making Massachusetts the 29th state to ban texting behind the wheel for all drivers and any cellphone use for those under 18.

The law, the product of intense lobbying by safe-driving advocates and families of loved ones lost in fatal accidents, will take effect in 90 days, in October. It also requires drivers 75 and older to take vision tests and renew their licenses in person, rather than online.

The governor signed the bill in his office, surrounded by lawmakers, state officials, and relatives of those who have been killed in texting-related crashes. Bumper stickers placed around the bill read “Drive Now, Text Later.’’

“I’m thrilled it’s passed,’’ said Melissa Martin of Southbridge, clutching a photo of her 17-year-old daughter, Amanda, who was killed after text ing behind the wheel on her way to school in 2007. “My daughter is very much missed and I feel like she’s here today. Even if it just saves one life, to me, all this that I’m putting myself through will have been worth it.’’

The texting ban covers writing and reading e-mail, Internet searching, and other noncalling activity on a phone, laptop, or handheld electronic device by anyone operating a motor vehicle. It also applies to drivers waiting at traffic lights and stop signs. Texting and talking for those under 18 will be allowed only in an emergency or when a car is pulled over and parked.

The prohibited activities will be primary offenses, meaning police will not need another reason to stop a car and ticket the driver. Violations will result in a $100 fine, and drivers under 18 will also have their licenses suspended for 60 days and be required to complete a course to change their behavior. The offenses will not be considered moving violations and will not result in insurance surcharges.

Police chiefs praised the law but said it will be difficult to enforce.

“They are going to have some difficulties with enforcement, because how do we tell if you’re under 18 or over 18?’’ said Police Chief Robert E. Meaney Jr. of Medfield, chairman of the traffic and highway safety committee of the Massachusetts Chiefs of Police Association.

“Also, we’re going to have to figure out, is the person over 18 dialing a phone or texting on the phone?’’ Meaney said. “It’s going to be interesting to see how this whole thing plays out, because I’m sure we will have some issues of [drivers saying] ‘Well, I wasn’t texting; I was simply dialing my phone.’ ’’

Police Chief Paul Keenan of Quincy echoed the concerns. “It’s probably going to be difficult, and I’m sure there are going to be court challenges,’’ he said.

Law enforcement officials said texting behind the wheel has become so commonplace that the law will require a massive public awareness campaign. Meaney said he planned to place an electronic road sign near the local high school to display information about the ban and to speak about the law at school assemblies this fall.

“The information we have around the country is that it’s ignored by most motorists, and so hopefully people will adopt it and embrace it,’’ said John M. Collins, general counsel of the police chiefs’ association. “We’re so shorthanded right now that to put somebody on patrol and say, ‘Your job is to pull over texters’ — I don’t think so.’’

State officials said they expect police and the public will adapt to the ban. The law requires the Registry of Motor Vehicles to conduct a public awareness campaign.

“We’re going to have to educate both State Police and the local police about how to enforce this,’’ said Jeffrey B. Mullan, the state transportation secretary. “And people will get used to it. But we don’t have any concerns . . . about the police’s ability to enforce the law.’’

The governor spoke in personal terms about texting, recalling how his daughters even text each other at the dining room table.

“We all have more to do than we have time to do it,’’ he said. “And the tools that are available to us today — texting, e-mail, BlackBerrys, cellphones — are a part of how we get all that done. But using those tools must be done wisely. It must be done consistent with the safety of oneself and others. And this bill, by banning texting while driving, is a big step in the right direction.’’

The law is also the result of growing concerns over the fitness of senior citizens who drive. It will make it easier for police and doctors to alert the Registry to concerns they have about a driver’s mental or physical fitness, regardless of age. The law makes it easier for the Registry to order the retesting of drivers who receive multiple tickets for speeding or certain other infractions, such as running red lights.

The law follows five years of on-and-off debate and pressure from advocates as varied as Oprah Winfrey and US Secretary of Transportation Ray LaHood calling on the state to enact a ban. Steven A. Baddour, Senate chairman of the Legislature’s Transportation Committee, said the end result will make the roads safer for drivers of all stripes.

“I don’t care how good they think they are,’’ he said. “They cannot drive and text and do it safely.’’

New rules of the road

Q. Are police allowed to stop me if all I’m doing wrong is texting while driving?

A. Yes. The bill makes texting behind the wheel a so-called primary offense, meaning police do not need another reason to pull you over and ticket you.

A. No. And texting and talking for those under 18 will be allowed only in an emergency or when a car is pulled over and parked.

Q. May I make a call behind the wheel?

A. Yes. Drivers 18 and older will still be allowed to make phone calls with their cellphones.

Q. What happens if the police stop me for texting while driving?

A. Violations will result in a $100 fine, and drivers under 18 will also have their licenses suspended for 60 days and be required to complete a safety course. The offenses will not be considered moving violations and will not result in insurance surcharges.