More than a dozen believed prone to violence arrested 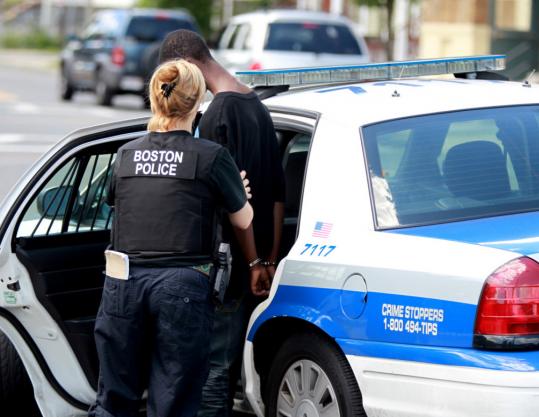 An officer placed a young man in a car after an arrest on Norfolk Street yesterday. Boston police attempted to get known offenders off city streets prior to the holiday weekend. (Jonathan Wiggs/Globe Staff)
By Milton J. Valencia Globe Staff / July 3, 2010

Hoping to prevent a bloody Fourth of July weekend, a team of law enforcement officers has combed Boston’s toughest neighborhoods and arrested more than a dozen people who are so-called impact players and pose a potential to commit violence, police said.

The sweep, called Operation Boomerang, is an often-used law enforcement strategy to get known offenders off city streets, but it was timed with the upcoming holiday festivities — a time for celebration, but in past years also bloodshed — in mind.

“Gang activity and the violence that accompanies it will not be tolerated in our neighborhoods,’’ Police Commissioner Edward F. Davis said in a statement. “Those responsible for such activities will be apprehended and held accountable.’’

One of the more notable arrests was that of Jeffrey Grand-Pierre, 25, who was wanted for intent to rob while armed and unlawful possession of a firearm. A 15-year-old was also arrested on a warrant for assault and battery by means of a dangerous weapon. Other arrests were for probation violations and for drug dealing.

While the city is trying to curb a recent wave of violence, including the shooting deaths of eight-graders Jaewon Martin and Nicholas Fomby-Davis, both 14, who were killed within three weeks of each other in May, the sweep was viewed as part of a broad strategy to keep city streets safe.

The timing was also significant. The city’s Fourth of July celebrations were marred two years ago, when a series of shootings over a span of eight hours left two people dead, including a teenager, and five others injured. Also, a homeless man was beaten to death in broad daylight, near Faneuil Hall Marketplace.

Jake Wark, a spokesman for Suffolk District Attorney Daniel F. Conley, said yesterday that those arrested were identified by probation officers and other investigators for having outstanding warrants and being known players in the city’s underworld. Members of Conley’s gang unit helped to secure warrants for their arrests, and will also help prosecute them for the probation violations. Members of the state Department of Youth Services and Boston School Police also participated in the sweep.

“The idea is identifying significant players and taking them off the street, and using levers such as probation, we can reduce active violence and subsequently the retaliatory violence that too often erupts during the summer,’’ Wark said.

“There’s certainly knowledge on the street of who is involved in the gangs.’’

The sweep is also occurring days after the city and community leaders announced a multipronged crime-fighting effort called Partnerships Advancing Communities Together, or Boston PACT, to reach out to youth at risk of turning to a life of crime and their families.

One strategy is to lure young people out of gangs: Police officials say the city has about 116 known gangs with 3,500 members and associates, a sizeable difference compared with the 1980s, when there were 15 gangs with 450 members.

The city is nowhere near the record 152 homicides of 1990, but the recent spike in violence has law enforcement working to identify known players before any violence occurs. The city has had 30 homicides this year, compared with 24 at the same time last year. Early yesterday, an unidentified man, believed to be in his 40s, was found dead of gunshot wounds on Woodrow Avenue in Dorchester. That death has not been ruled a homicide, as of last night. In 2009, there were 49 killings citywide.

Mayor Thomas M. Menino has met with community and clergy leaders to coordinate a citywide response to violent crime.

“Today’s warrant sweep shows that as a community, we will not tolerate violent behavior in our city,’’ Menino said yesterday. “Summer is a time for kids to relax and enjoy a positive break from their school schedule and activities.’’