Calls for 3 resorts; deadline looms for accord with House 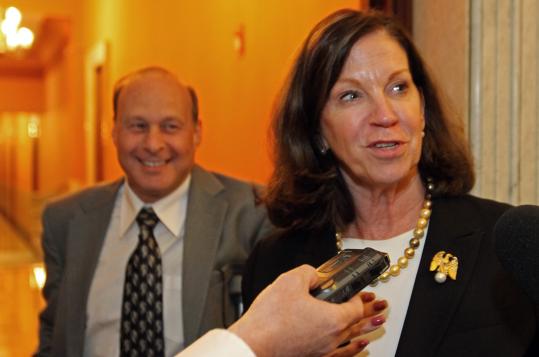 “We have produced a bill that is responsible to the public and will do what’s best for our overall economic interests,’’ said Therese Murray, Senate president. Senator Stanley Rosenberg of Amherst listened as Murray addressed reporters yesterday. (Matthew J. Lee/Globe Staff)
By Noah Bierman and Travis Andersen Globe Staff / July 2, 2010

The Massachusetts Senate voted 25 to 15 last night for legislation licensing three resort-style casinos, bringing a Commonwealth once settled by Puritans closer than ever to Vegas-style gambling.

On their eighth day of debate, senators waded through a final list of proposed amendments, clearing one hurdle for a possible casino in Fall River and requiring all casino developers and operators to ensure that they do not hire illegal immigrants.

The House in April passed its own gaming legislation, though its bill is markedly different from the Senate’s, especially on the issue of slot machines, leaving the fate of expanded gambling uncertain. Leaders of the two chambers will now hash out the differences before sending a final bill to Governor Deval Patrick, a supporter of casinos.

His spokesman could not immediately be reached for comment last night.

Proponents say they will bring jobs and a potential lift for a state government that has been forced by the economic downturn to cut services at nearly every level.

But opponents argue that casinos would diminish the economic and social character of a state that has marketed itself as a high-tech center home to world-class research universities. They also warn that casinos would increase addiction and crime and hurt small businesses.

“I have tried to point out that your taxpayers, your constituents, will be subsidizing this industry,’’ Senator Susan C. Tucker, an Andover Democrat and a leading opponent of expanded gambling, said on the floor yesterday. Her colleagues have not studied the potential economic costs, she said. “These are not economic development tools whatsoever, because the money doesn’t stay in the community.’’

“Well, corks are popping all over Massachusetts in those lobbying offices tonight,’’ Tucker said.

Richard R. Tisei, the Senate minority leader and the Republican candidate for lieutenant governor, said before the vote that he opposed the bill in part because granting three licenses at once is too risky.

“It would probably be better to do one’’ and then assess the impact, he said. Tisei added that several amendments to the bill would cut into revenue gains. He also said lawmakers and the governor should have devoted as much energy to finding savings in the budget as they have to getting casinos approved.

“It’s pretty sad that in three years, 3 1/2 years of [Patrick’s] administration, that the number one economic priority has been casinos,’’ he said.

Senate leaders estimate the state would collect between $285 million and $355 million a year in taxes and fees under their plan, once the casinos are operating, and possibly within a year of the bill’s enactment. The bulk of that money would be divided among aid to cities and towns, state debt payments, and economic development projects. Ten percent would go to law enforcement and addiction programs.

A one-time licensing fee of $75 million will apply to all three regions under the terms of the bill, Senate leaders said in a statement, for a total collection of $225 million for the state.

But there are key differences with the plan that passed in the House. The House bill calls for two casinos and puts no restrictions on location. Most significantly, the House measure, with the strong backing of House Speaker Robert A. DeLeo, also allows up to 750 slot machines at the state’s two horse-racing facilities and two former dog tracks.

“Passing expanded gaming legislation is vital to creating jobs and economic growth in Massachusetts,’’ DeLeo said in a statement after the Senate passed its bill. “I look forward to working with the Senate to reach a compromise bill in a timely fashion.’’

Negotiators do not have much time to work out the differences, with the legislative session scheduled to end July 31. In the past, Patrick has proposed a plan more similar to the Senate’s and voiced strong skepticism about licensing slot machines.

But state Senator Marc R. Pacheco, a Taunton Democrat, said on the floor that he reluctantly supported the bill and hoped a final version will include slots at the state’s existing race tracks.

“If we don’t have slots at the tracks we lose about 1,000 jobs overnight,’’ said Pacheco, whose district is home to Raynham-Taunton Greyhound Park.

Therese Murray, Senate president, said in a statement released after the vote that casino gambling was “a significant change’’ for Massachusetts that would ultimately pay dividends.

“We have produced a bill that is responsible to the public and will do what’s best for our overall economic interests, creating short-term construction jobs and permanent long-term jobs,’’ Murray said.

State Senator Karen Spilka, an Ashland Democrat who chairs a Joint Economic Development Committee, added in the statement that the bill creates an “aggressive approach’’ to problem gambling by “requiring a baseline study for the treatment of addiction before casinos even enter the state.’’

Michael Levenson of the Globe staff contributed to this report. Noah Bierman can be reached at nbierman@globe.com, and Travis Andersen at tandersen@globe.com.