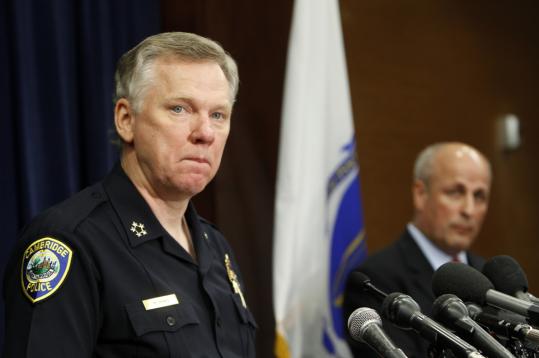 CAMBRIDGE — Both Harvard University professor Henry Louis Gates Jr. and the police sergeant who arrested him last year were to blame for the high-profile dispute that followed, according to an independent panel’s report yesterday on a case that sparked a national discussion on racial profiling.

The 12-member committee found that Gates and Sergeant James Crowley missed opportunities to deescalate the tension and said they share responsibility for the controversial July 16 arrest. The dispute, the panel found, was “avoidable.’’

The report focuses on the task of balancing police protocol with the officers’ need to show respect to the people with whom they are dealing.

Cambridge Police Commissioner Robert Haas said at a press conference after the report was released yesterday that it will serve as a training tool for officers engaged in tense situations. An officer with a badge bears the ultimate responsibility for quelling any incident, he said.

Chuck Wexler, executive director of the Police Executive Research Forum and chairman of the panel, added, “Officers must be trained to take the high road to deescalate encounters.’’

The panel spent the past seven months interviewing witnesses, along with Gates and Crowley, but its final report made little mention of the allegations of racial profiling or the differing accounts of the incident. It sought instead to explain police policies and the arguments of both men in an effort to outline better strategies for police and community relations.

Gates and Crowley gave different accounts of what happened on the afternoon of July 16, 2009. What is clear is that a woman called 911 to report a possible break-in at Gates’s home, which he rents from Harvard University. Gates, 59, who had just returned from the airport, and his limo driver had to force open the front door because it had been jammed in a recent break-in.

Crowley appeared on the front steps while Gates was in the kitchen. According to the report, Gates said he showed his Harvard identification and felt he was being demeaned by Crowley, who he thought continued to look at him as a break-in suspect because he was black.

The 43-year-old Crowley, who is white, said he tried to explain the situation, but the professor was unruly and followed him out of the house yelling at him. Both men said they “feared’’ each other. Gates was arrested and charged with disorderly conduct within six minutes of Crowley’s arrival. The charges were later dropped.

After the report was released, Crowley issued a statement, saying, “I certainly don’t expect anyone to fully understand the dynamics of the encounter when they weren’t there, but I was pleased that the committee took the time to speak with me and give my account of the arrest. No one that knows me thought that the arrest was based on race in any way.’’

Charles Ogletree, a lawyer for Gates who has written a book about the incident, said yesterday: “The report is important and timely in its recommendations about going forward and in improving the relations between law enforcement officers and the community. That is sorely needed, and it could not have come at a more appropriate time.’’

He also said, however, that he found the report disappointing because it does not address the most critical factors of what happened before the arrest.

“For the report to say both Gates and Crowley had an equal opportunity to deescalate the situation is just breathtaking and unbelievable,’’ Ogletree said. “The person with control and power to make an arrest that day was [Sergeant] James Crowley, not professor Gates.’’

That a prominent black professor was arrested by a white sergeant because of a false call of a break-in at his home sparked a national debate over police relations with minority communities. President Obama even got involved, stepping in to ease tensions by hosting a “beer summit’’ with the men and the vice president at the White House.

Wexler said yesterday that the arrest had larger implications on police and community relations and that the panel considered race, class, respect, and police authority in its findings.

He said the report was explained to both men before it was released. While he could not characterize their reactions, he said: “There was a recognition, within six to eight seconds, they both realized the encounter was going downhill. That’s how fast it happened.’’

The panel, made up of law enforcement specialists, as well as consultants on management and human resources, focused on police powers and the precautions that need to be taken in responding to a breaking and entering call and balancing that with “procedural justice,’’ that is, whether people feel they are being treated with dignity and respect during an encounter with police.

Wexler said panel members saw this “as a conflict between procedural justice and tactical considerations.’’

“Both are essential and they can conflict with each other, and that’s what happened on July 16,’’ he said.

According to the report, which cost about $100,000, the situation should have been defused when Gates showed his identification and Crowley explained that he was taking precautions because of the 911 call.

Stacy Blake-Beard, a member of the panel and a professor from the Simmons School of Management, said yesterday that the report went beyond the allegations of race and focused on police and community relations.

“We want to see what happens as a result,’’ she said. “How will other police departments and other organizations be able to use the learning that has been put into place with this report.’’

Haas said the department will work to incorporate the report’s recommendations to better train officers to defuse such situations rather than allow them to escalate. Training for “problem solving’’ and defusing situations could become part of police academy training and recruitment, he said.

The commissioner said the department also investigated disorderly conduct arrests over recent years as part of its own internal investigation. While race did not play a factor in the arrests, the department realized that tracking such arrests could prove to be a measure of an officer’s interaction with the public. Haas said the tool should be used by departments across the country.

“What is certain is that the July 16 incident was not a success in terms of police-community relations,’’ the report said.

Tracy Jan of the Globe staff contributed to this report. Milton Valencia can be reached at mvalencia@globe.com.