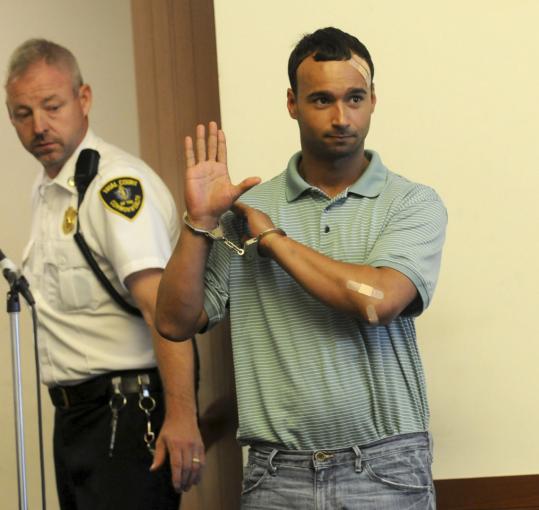 Alejandro Serra, 29, yelled at his arraignment that he is “Pope Alexander, not the apostle Alexander.’’ (Ted Fitzgerald/Pool)
By Milton J. Valencia Globe Staff / June 30, 2010

The driver who led police on a harrowing 20-mile high-speed chase from Boston to Framingham has a history of mental illness and assaults on police officers, yet he was released from state hospitals, posted low bails, and skipped court hearings after recent arrests, according to court records. At one point in court yesterday, he yelled out that he was “Pope Alexander.’’

Alejandro Serra, a 29-year-old from Framingham who was committed to a state mental health facility two years ago after he was found not criminally responsible for an assault on a state trooper, was supposed to return to Boston Municipal Court last Wednesday to answer to trespassing charges. He was also supposed to attend court-ordered mental health counseling, according to court records.

On Monday, Serra allegedly fled from pursuing officers at speeds over 80 miles per hour, after swearing at a man with a toddler in the South End who told him to quiet the music in his car, then refusing to stop for a trooper and nearly striking a couple crossing the street. The chase ended in Framingham after State Police cruisers blocked his car in on the Massachusetts Turnpike, where he jumped out of the vehicle and tried to flee.

State Police later said they were “glad we were there to get him off the road.’’

Serra was arraigned yesterday in Boston Municipal Court on 14 charges of assault and battery with a dangerous weapon, resisting arrest, and an array of motor vehicle violations and was committed to Bridgewater State Hospital to determine his competency to stand trial.

During the brief hearing, he was visibly troubled, shaking and twitching, and at one point stared and smiled at spectators in the courtroom. A not guilty plea was entered on his behalf.

Serra, who wore a bandage on his forehead, also yelled out during the hearing, saying he was “Pope Alexander, not the apostle Alexander; get it together.’’

State Police had said Monday they would review Serra’s arrest and the use of force by officers who were recorded on video throwing several punches to subdue him as he tried to flee his blocked-in car.

Jeffrey Miner, a forensic psychologist who was appointed by the court to determine Serra’s state of mind, said during the hearing that the suspect was delusional. He said Serra was aggressive toward him during questioning and said he was a Supreme Court justice.

“He is clearly, I believe, out of touch with reality,’’ Miner said.

Serra’s court-appointed lawyer, Michael D’Amore, would say only: “This may be a case where his psychiatric illness may be responsible for his conduct.’’

Serra has a history of arrests in Florida, where he had been staying with a brother, and most recently in Massachusetts, where he has lived for the past six years. He was arraigned on methamphetamine charges in Framingham in April and was charged with pushing his 67-year-old roommate earlier this month.

His license was suspended in Massachusetts for failure to pay a 2004 speeding ticket in Westwood, yet he continued to drive and receive traffic tickets. He was sentenced to jail time and probation in November 2005.

In June 2008, Serra was found not criminally responsible for assaulting a state trooper who stopped to question him in the South End a year earlier over alleged disorderly behavior. He was committed then to the Erich Lindemann Medical Health Center, which is run by the Department of Mental Health.

According to records, he was supposed to notify hospital officials of his intent to leave three days in advance, and the hospital reserved the right to petition to have him committed again. But at one point he was released. The conditions and date of his release were not known yesterday.