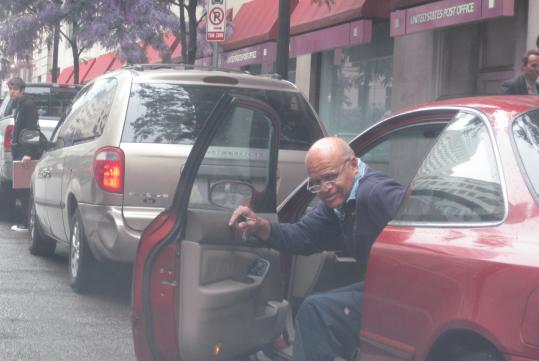 A parked vehicle is seen blocking an MBTA bus stop. That prevents buses from pulling up close to the curb and safely boarding disabled passengers, advocates say. (The Rev. Ellen M. Frith for the Globe)
By Eric Moskowitz Globe Staff / June 28, 2010

A beer delivery truck. A van. A Tufts University police SUV. A van. Even the Avalon of a Cambridge District Court judge who stopped to get a sandwich.

All were parked illegally at an MBTA bus stop and caught on camera by a Somerville minister who advocates for the disabled.

The pictures, hundreds of them, were among the evidence and testimony that T riders with disabilities presented to the MBTA and state Department of Transportation last week, as part of their campaign to fix what they say is a major problem: rampant violations of the state’s much-heralded new law that imposed heavy fines statewide for parking in a bus stop.

Governor Deval Patrick signed the Bus Stop Access Law last year with fanfare, and it was celebrated by T riders with wheelchairs, strollers, or sight impairments who rely on buses pulling flush with the curb so they can board safely. The law, state officials said at the time, would “send the message that illegal parking at bus stops is both dangerous and irresponsible.’’

But members of the MBTA’s Access Advisory Committee, which advocates for disabled commuters, and others say the law is being severely undercut by spotty enforcement. MBTA police have quadrupled their ticketing rate of violators, but the agency lacks cooperation from municipal police and parking departments in cities and towns served by the T, said Ben Haynes, the advisory committee’s chairman.

“They allow people to park indiscriminately at bus stops’’ and that prevents people in wheelchairs and on crutches from getting on buses, said Haynes, citing what he called “complete disregard’’ for the law in some areas. “We are not going to let this issue go, because it is one of safety.’’

The T says it has been promoting and enforcing the law and is in the process of installing better signs at bus stops. MBTA General Manager Richard A. Davey said he will reach out to cities and towns to seek greater support.

“It’s a civil rights question for us, really. I don’t think people think about it that way, but it is,’’ said Davey, who has taken photos of cars blocking bus stops and forwarded them to transit police. “Our disabled passengers and those who need extra assistance need to be able to have curbside access, and parking in those spots really is denying our passengers that right.’’

The new law took effect in April 2009, three years to the month after the T settled a federal lawsuit over sluggish and inadequate compliance with the Americans with Disabilities Act, including inaccessible trains and buses.

In the settlement, the T agreed to spend $310 million on accessibility and submit to independent monitoring. The T also lobbied Beacon Hill to pass a law to make it easier to keep bus stops clear, so buses could deploy ramps or lifts at the curb.

That law set the fine at $100 for blocking a bus operated by the MBTA or any of the state’s 15 other regional transit authorities, replacing a town-by-town system under which fines ranged from a few dollars in some communities to $55 in Boston.

Previously, the T’s police department had to coordinate with an individual city or town before writing a citation. That hindrance resulted in the department writing just 290 tickets in 2008 for blocking bus stops, according to Deputy Chief Joseph F. O’Connor. In 2009, the figure soared to 1,550, with most of those written after the law took effect April 7. This year, the transit police wrote 831 through May, an even greater clip.

“I think as time goes on, with more public education and more enforcement, that we’ll see greater impact,’’ O’Connor said.

But he acknowledged that parking is just one of many responsibilities for the department, whose roughly 260 officers are charged with protecting riders throughout the system, and said that parking enforcement is also a municipal duty.

By comparison, parking tickets for bus violations are down this year in Boston. Measured in fiscal years, the city — from last July 1 through the end of May — has issued 23,442 tickets for blocking bus stops this year, compared with 33,260 over the same period in fiscal 2009, said Jim Mansfield, a Boston Transportation Department spokesman. He attributed the drop to public awareness, not to decreased enforcement.

Boston is one of just 47 communities with MBTA bus service, and the 190 routes have thousands of stops. Enforcement varies widely but could be improved everywhere, according to the members of the Access Advisory Committee and other disabled riders.

Some said they had even seen police officers obstructing bus stops — lingering there, or parking while working nearby construction details — and offered photos to support the allegations. Esther Minor, a South End resident who uses a wheelchair, had pictures on her phone showing two cruisers at a stop near Boston Medical Center, which she said forced her to attempt an unsafe boarding from the street.

The Rev. Ellen M. Frith, an advisory committee member, has spent much of the last decade recording parking violations, first in notebooks, then with disposable cameras, and now with a Canon PowerShot.

Those include a series of photos and videos of a man in a khaki suit parking a Toyota Avalon with a “Trial Court of the Commonwealth’’ sticker at a bus stop for the 69 route in Cambridge. On video, the man tells Frith she looks “kind of silly,’’ asks if she is employed, and tells her “you need a job.’’ The Globe confirmed his identity as district court judge Severlin B. Singleton III, who declined to comment through a court system spokeswoman.

“We fought to get that bus stop law,’’ said Frith, who has been on disability with multiple chronic illnesses since being struck by a car in the early 1990s. “People with disabilities are not respected, and our right — our civil right, our ADA right — is not protected.’’

As the 20th anniversary of ADA enactment approaches, people with disabilities enjoy a smoother relationship with the Massachusetts Bay Transportation Authority, its general manager, and the state’s transportation secretary than at any time in the past, according to Haynes, Frith, and others. But they say the nation’s oldest transit system should be more of a leader.