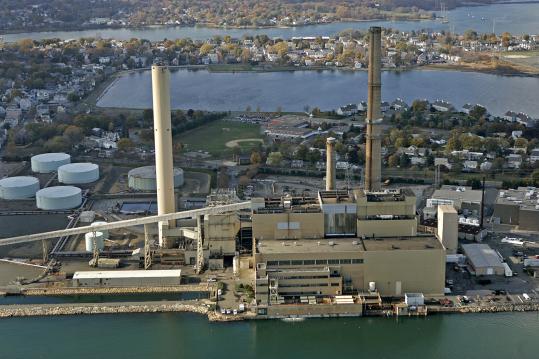 The foundation argues that the plant has exceeded the federal Clean Air Act’s pollution allowances at least 317 times in the past five years and should pay penalties of more than $10 million.

The government limits opacity — the density of smokestack emissions — to minimize the amount of harmful chemicals released into the air.

“Abiding by the Clean Air Act is not optional,’’ said Shanna Cleveland, a staff attorney at the Boston-based foundation, in a statement. “According to its own reports, Salem Harbor Station is in continual violation of what the law has deemed necessary to safeguard public health. This casual disregard for the law and the people impacted by Dominion’s negligence must not go on unchecked.’’

Dan Genest, a spokesman for Dominion, said the company’s lawyers are reviewing the suit, the second the group has filed against plant owners this decade.

In 2007, three Dominion employees died at the Salem Harbor Power Station when a boiler exploded. A report by the state Department of Public Safety found that power plant officials had failed to carry out a crucial annual inspection for the previous 10 years.

The report cited extensive corrosion of tubes near an area of the boiler that also was supposed to be inspected.

The foundation’s co-plaintiff in the suit, HealthLink, a nonprofit public health group from Swampscott, argues that short-term exposure to ash and metal in the soot released from the plant can cause health problems. They cited studies showing that exposure to the soot can be linked to higher rates of hospitalization for heart and respiratory problems, especially for the young and elderly.

“Salem Harbor Station must not be allowed to continue to pollute with impunity,’’ said Martha Dansdill, executive director of HealthLink, in a statement. “It is clear that Dominion is not operating in the best interest of the people who live nearby and must breathe in air dirtied by this particulate-laden, toxic plume. Dominion cannot continue its lax management at Salem Harbor Station which risks our health.’’

For years, the foundation has pressured the plant to clean up or shut down its operations.

In 2000, the foundation sued the plant over dumping toxic combustion waste, or coal ash, into pits where it allegedly contaminated the groundwater. The former owner of the plant, PG&E, settled with the foundation by agreeing to clean and close the pits.

“If Dominion needs to keep this old dinosaur running, they need to be held accountable for operating responsibly and in accordance with the law,’’ Cleveland said.