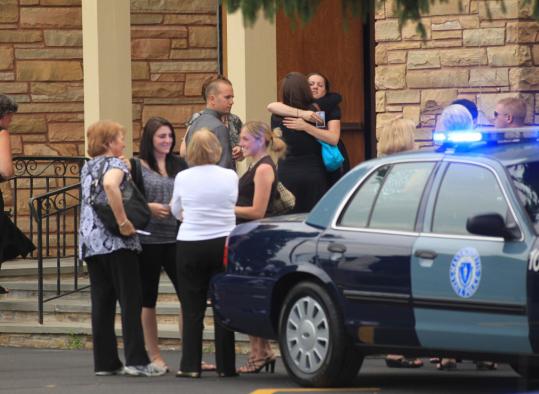 BROCKTON — Thousands of mourners stood patiently for hours under a searing afternoon sun yesterday, barely moving outside Our Lady of Lourdes Church as friends, co-workers, neighbors, and strangers gathered to pay respects to the family of State Police Sergeant Douglas Weddleton.

Some recalled Weddleton’s stint as a hard-working teenage broiler cook at a local steak house. Others reminisced about the dedication to family that prompted Weddleton, 52, to work a paid detail early Friday in Mansfield. And long-ago classmates smiled as they spoke of an earnest, kind, and unflappable disposition.

Weddleton, a married father of four, died on a northbound offramp from Interstate 95 in a chain-reaction crash involving two allegedly drunk drivers at 1:15 a.m. Weddleton, whose cruiser had blocked the ramp as part of a construction detail, was struck as he spoke to the driver of one car that had tried to maneuver around his cruiser. As Weddleton stood on the ramp, another car traveling at 65 miles per hour struck the first vehicle, which careered across the road with Weddleton underneath.

“He’s just a family guy who worked the extra hours like we all did,’’ said Lieutenant James Mills, who commands the State Police station in Revere. “You like to think you’re in control, but you can’t control everything. You know that the minute you walk inside the door, and you hope that everything works out for you.’’

Behind Mills, a childhood friend of Weddleton’s held the metal badge that Weddleton had worn as a sixth-grade patrol boy at the Brookfield School here. Mark O’Flaherty, 53, had been Weddleton’s lieutenant as the 12-year-olds had helped their classmates negotiate the streets around the school at the beginning and end of each class day.

“I’m going to give it to his son,’’ O’Flaherty said of Matt Weddleton, 14, the trooper’s youngest child. “Doug wasn’t the biggest guy in the world, but he had the biggest heart.’’

Doug Weddleton also was a milk boy, which meant that he would sell milk at school for 4 cents a carton and receive a free lunch in return. “I wouldn’t call him a teacher’s pet,’’ O’Flaherty said, “but he was very well thought of.’’

Another benefit of the extra responsibilities at the Brookfield School, O’Flaherty said, was that the student patrol could use the gym for floor hockey after the crossing job was over.

“He got there early, and he stayed late,’’ O’Flaherty said. “He was never late for his assignment.’’

Behind O’Flaherty, Mario Tavares stood quietly as he moved ahead slowly in line. Tavares, 47, did not know Weddleton, but he felt he had something in common with the family. His son, Jovany Eason, had been fatally shot in Dorchester last August, and Tavares wore a T-shirt with his son’s image on the front.

“I feel like he’s my son, too,’’ Tavares said of Weddleton.

Bob Tonucci, 73, recalled Weddleton as a broiler cook at the former York Steak House in Brockton. Tonucci, who had been general manager, described his teenage employee as “excellent, outstanding, and a heck of a nice person.’’

Tonucci, using a cane for support, was prepared to wait as long as the line took to inch its way around the corner, 100 yards away, and into the church. Weddleton, who later became a manager at the restaurant, was “one of the sweetest kids I ever knew,’’ Tonucci said.

The Rev. William Hamilton, a State Police chaplain who is scheduled to say the funeral Mass today, said the Weddleton family has shown remarkable resilience during the meetings he has had with them since the trooper’s death, a trait he attributed to Weddleton’s influence.

The involvement of allegedly drunk drivers compounds the loss of someone who worked to protect public safety and improve the life of his family, said Hamilton. “We’re all diminished a little bit by this whole event,’’ said the priest, who added that “the Commonwealth is better because of people like Doug.’’

In the early evening, led to the church by a solitary bagpiper, the entire available force of the State Police filed silently into Our Lady of Lourdes to walk past the casket of a fallen comrade.

State Police from elsewhere in New England, as well as police from Boston, Brockton, and dozens of communities across Massachusetts, followed the troopers.

Brian MacQuarrie can be reached at macquarrie@globe.com