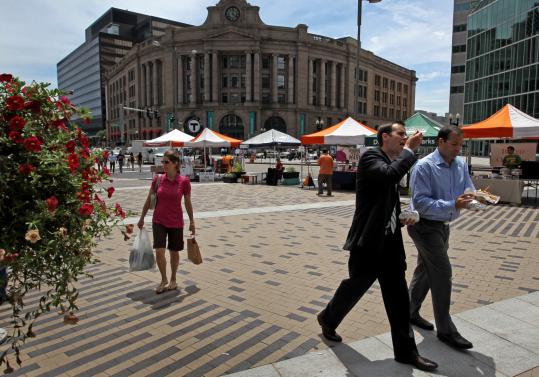 Low-income residents can now use their electronic benefit transfer cards to get money back when shopping at the Dewey Square farmers’ market (above). Mayor Menino imagines the market as a “gathering place for people in our city to come together.’’ (David L. Ryan/ Globe Staff)
By Alex Katz Globe Correspondent / June 23, 2010

Under the Boston Bounty Bucks program, more than 82,000 residents who are enrolled in the Supplemental Nutrition Assistance Program will be eligible to receive credits of up to $10 when they buy produce from local farmers’ markets using electronic benefit transfer cards, according to the mayor.

“It’s a win-win for everyone,’’ Menino said before diving into a soy BLT sandwich and rosemary fries from Dewey Square favorite Clover Fast Food.

Megan Harrington, market manager for the Boston Public Market Association, said she believes the program will help eliminate the stigma that farmers’ markets are too expensive. One of the biggest deterrents for low-income residents has been the lack of convenience when shopping at local farmers’ markets, she said.

“It’s easier to buy mac ’n’ cheese for your family than to come here and buy fresh pasta and vegetables,’’ Harrington said. “But our food here is a lot healthier than a carrot that was shipped from California two weeks ago.’’

With electronic benefit cards replacing food stamps at a rapid pace, cash-only farmers’ markets have struggled to adapt to the new technology, and low-income residents have suffered as a result. Now, thanks to funding at the city, state, and federal level, in addition to resources from nonprofit organizations like The Food Project, low-income residents will have easier access to fresh food from local farmers.

One of those farmers at the market yesterday, Jeff Howard of the central Massachusetts town of Oakham, understands tough times.

After working as a financial analyst for most of his adult life, Howard lost his job a few years ago when the economy took a turn for the worst. Howard turned his hobby into a full-time job as a garlic farmer, producing all-natural pesto and other items.

Howard and his wife soon dedicated themselves to developing Linabella’s Gourmet Garlic Farm, a small business they established and named for their two young daughters, Angelina, 8, and Isabella, 6.

In spite of everything, Howard said, they like working for themselves.

“It’s exhausting but rewarding,’’ he said. “We’re killing ourselves for ourselves, at least.’’

City leaders see spots like the Dewey Square farmers’ market as a vibrant place to unite all walks of life in Boston.

“It’s a gathering place for people in our city to come together,’’ Menino said. “It’s one of the things that energizes our city.’’

Alex Katz can be reached at akatz@globe.com.