A loss that never leaves them 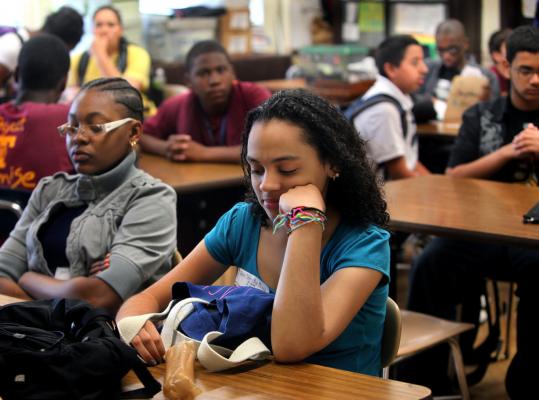 One eighth-grader gets so overwhelmed that she chokes up singing “Let There Be Peace On Earth.’’ Another has nightmares of being shot. Others say they can still feel the presence of the classmate who is suddenly gone.

As much as students at the James P. Timilty Middle School are trying to move on, they can’t let go of 14-year-old Jaewon Martin, six weeks after he was shot dead on a Roxbury basketball court, a victim of gun violence. Grief flickers on at the most unexpected of moments — a song, a laugh, a sudden gaze at his empty desk.

“He’s here, but he’s not here,’’ explained Nelsmarie Matos, 14, who was in Jaewon’s classes.

For many students at the Roxbury school, the brutal slaying of the honor roll student with a bright future has shattered their sense of security. It is challenging the Timilty staff to renew hope in the students and keep them on track academically, all the while remaining vigilant for signs — any change in a child’s facial expression or interactions — hinting that something might be awry.

“Every day you are in school you are looking to see if there is someone you missed,’’ said Valeria Lowe-Barehmi, the Timilty principal.

Students having difficulty with their grief might receive an offer to talk with an adult. Other times, the staff refers them to a school district psychologist or an outside program.

The school is coping with Jaewon’s death during one of the busiest times of the year, packed with MCAS testing, final exams, graduation rehearsals, and during a spring marred by the death of another 14-year-old, Nicholas Fomby-Davis. The Dearborn Middle School student was killed in gun violence just three weeks after Jaewon.

The grief, if it goes unaddressed, could have catastrophic consequences, school officials and psychologists say. Students could lose interest in school, possibly drop out. Or they may act out, sometimes drifting to the streets.

“One thing we worry about is kids walking around with chronic fear and a lack of capacity to dream,’’ said Maria Trozzi, director of the Boston Medical Center’s Good Grief Program, which trains educators how to help students cope with death.

Such feelings, she said, can lead students to raise such questions as “What’s the sense of doing good in math if I walk home and get killed?’’

The Timilty is becoming adept at counseling students in grief. Jaewon is the school’s second student lost to violence in the past three years.

On Oct. 4, 2007, Steven Odom, a 13-year-old eighth-grader, was shot dead just a few feet from his doorstep. His death occurred just one month after Jaewon’s class members started their middle school careers at the Timilty.

Monday mourning
More than a dozen school district psychologists, as well as counselors from other schools, were on hand to assist the Timilty staff and students on the morning of Monday, May 10, two days after Jaewon was killed. Jaewon, who had no criminal record and no ties to gangs, was shot by an unidentified gunman. A friend was wounded.

Grief appeared to weigh the heaviest in Jaewon’s homeroom, said students, teachers, and administrators in interviews. Some students cried; others put their heads on their desks; a few couldn’t enter the room for a day or two, unable to bear the sight of Jaewon’s empty desk and feel the absence of his persistent laughter.

Homeroom teacher Jim Lemery and two psychologists gathered about a dozen students willing to talk into a circle. They shared how they felt while passing around a heart-shaped stress ball. Eventually, students sitting outside the circle chimed in, Lemery said. Others met with counselors outside the classroom.

To honor Jaewon, students made arm bands out of purple construction paper, drew posters of doves and other peace symbols, and wrote letters to his family.

One student addressed his letter to Jaewon in heaven: “Right now you’re probably up there resting, sleeping. Maybe you’re watching your friends and people you know, like the people in [Room] 215. . . . You know we’ll remember you and you’ll remember us.’’

Another classmate referred to Jaewon in a letter to his family as Room 215’s “fallen soldier.’’

By Wednesday morning, 14-year-old Andrew Dickson gathered the strength to enter the homeroom for the first time. He had met Jaewon that year and always tried to sit next to him in classes, drawn to his sense of humor.

School has not been the same since, he said.

“Now, I’m quiet in all my classes,’’ Andrew said earlier this month. “I keep thinking about him any time I see those purple arm bands, any time I hear someone laugh.’’

Touched by violence
Almost 700 sixth-, seventh- and eighth-graders, clad in white shirts and khaki pants or skirts, arrive each day at the Timilty, located in a decades-old brick building atop a hill in Roxbury, not far from Dudley Square. About 90 percent of the students are from low-income families, often coming from neighborhoods dogged by violence.

While the murder of Jaewon has put the school in crisis mode, dealing with students touched by violence is almost an everyday occurrence here. Many witness crimes or know the victims.

One of Jaewon’s friends said that a few weeks after his slaying she saw the body of an 18-year-old shooting victim lying in a pool of blood in her neighborhood. The next week, a 10-year-old girl was shot in the leg on the same street.

“The violence these kids are exposed to at 13 and 14 years of age is unimaginable,’’ said Stephanie Ward-Wilson, a Boston schools psychologist who works with the Timilty and other schools. “When Jaewon died, it immediately brought back other experiences for many students.’’

Promoting peace has long been part of the culture at Timilty, where the staff tries to instill students with skills to resolve differences without altercations and to stand up against injustices.

In the school auditorium hangs a banner that promises a “Violence-free zone.’’ In other parts of the building, signs caution against holding grudges by encouraging students to “Let go, move on.’’

One of the “move on’’ signs now sits on a hallway table with a makeshift memorial — a basket with his picture, a teddy bear, and several unlit candles.

It was a tragic ending for a boy who appeared to be embracing the school’s culture of promoting peace. Jaewon’s 18-year-old cousin was shot to death in 2007 by gang members pursuing a random target — the same year that street violence claimed the life of Odom.

For a class last year, Jaewon, under his mother’s guidance, wrote an essay on violence prevention, calling on teenagers to start programs that would discuss the causes and effects of youth violence.

“A lot of people just let the violence upon this world continue because they think trying to stop it will put them in danger,’’ Jaewon wrote. “Some people think that being positive and wanting peace isn’t a good thing.’’

Jaewon’s family has created a foundation to carry out his call to action, while classmates have launched a fund-raising campaign — allowing them to harness their grief into a positive venture. Students sold buttons with his picture at a basketball game, held a bake sale, and solicited donations for a school Peace Day this month.

Cheyenne Rodriguez-Hector, one of the student organizers, said that as much as she wants to stand up against violence, she harbors some reservations.

Constant reminders
When Luzangie Aguero, 14, sits alone at school she occasionally gets a chill in her shoulders. She has little doubt why: It must be Jaewon.

Other students have fully come to terms with this death. While no one wants to forget him, the question becomes to what extent his memory should be invoked.

In Jaewon’s homeroom, a picture of him and other students headed to a college fair last fall still graced the wall, along with a graph showing Jaewon as among those who had sold the most chocolates and other items in a fund-raiser — earning him a free limousine ride he never got to take.

Hanging on a wall at the front of the class were pictures drawn by students with the initials “RIP,’’ along with Jaewon’s dates of birth and death.

A mix of emotions flowed through the homeroom on June 8, the one-month anniversary of Jaewon’s death. His mother, Nicole Martin, finally mustered the courage to clear out Jaewon’s locker, inside his homeroom. She went about the task quickly, but teary-eyed. Students had decorated the locker door with a purple paper ribbon and a note that ended with the phrase “Gone but not 4gotten.’’

Students hugged her and she thanked them for the notes they have been posting on Jaewon’s Facebook page, telling them she would soon respond — using his account.

“Don’t be alarmed if you see his picture pop up,’’ she said, before one of Jaewon’s classmates helped her carry his stuff out.

With that, Lemery, the homeroom teacher, planned to tuck away the padlock for his locker, figuring it was no longer needed.

But some students asked him to put it back on. It comforted them to have it there, even though they knew the locker was empty.