Praying for peace on city streets 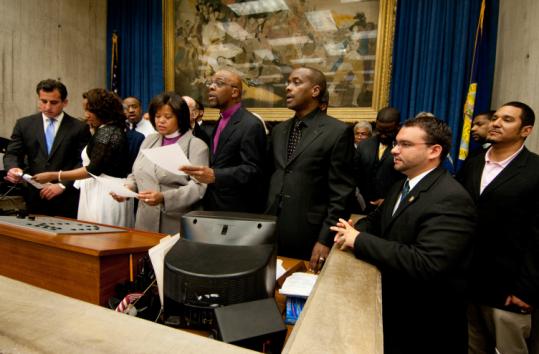 In a gesture borne of frustration and faith, a group of clergy from across Boston gathered in the City Council chamber yesterday to ask God for peace on the city’s streets.

“The violence in the neighborhood in which we serve is intolerable,’’ said the Rev. Cathy H. George of St. Mary’s Episcopal Church in Upham’s Corner. “And it wouldn’t be put up with anywhere else that I’ve ever been in the state.’’

The City Council opens each of its weekly meetings with a prayer, but yesterday, in a show of concern about a wave of violence in which five people under 16 have been shot this spring, Council President Michael P. Ross and Councilor at Large Ayanna Pressley asked a number of clergy to come and pray.

“This moment is about underscoring that there is power in prayer,’’ Pressley said. “And in times of chaos, when we cannot make sense of anything, we need to lean not to our own understanding.’’

The clergy took turns reading a prayer written by Pressley’s aide, George Williams IV, who is a minister in the United Church of God in Christ.

“Magnificent God,’’ the Rev. Jeffrey Brown, executive director of the Boston TenPoint Coalition, began, “we pause to remember the 28 people who have died this year from senseless violence.’’

Several others followed. Sister Barbara Gorham of St. Patrick’s Catholic Church in Roxbury asked God to “bless the children of this city, too many of whom walk the streets of their neighborhoods in fear.’’

The Rev. Walter Waldron of the same parish asked God to “strengthen their will to resist the lethal seduction of a romanticized lifestyle of violence.’’

In the past, clergy have played a significant role in reducing violence in Boston. In the early 1990s, black ministers teamed up with the police and social service workers to visit the homes of gang members, and their work is credited with leading to a dramatic drop in crime known as the Boston Miracle.

Similar efforts continue today, but not on the scale they once did, and it is not clear whether they remain as effective. This summer, clergy are gearing up for another series of activities designed to stave off violence, but they have been asking the city to provide more help, particularly in the form of money for summer jobs for teenagers.

Ross acknowledged yesterday that “prayer alone isn’t going to solve the problems in our city’’ and said he would work with clergy on some of the specific requests they made to him.

But Ross said he thought it was important to bring the clergy to City Hall at the beginning of the summer to give them a chance to talk and to signify the city’s focus and seriousness of purpose about addressing youth violence.

Those who came yesterday were women and men, black and white, Baptist, Presbyterian, Jewish, Catholic, Episcopalian, and nondenominational Christian.

Many of the clergy who came to pray yesterday said they were encouraged by the diversity of the group, because often black male ministers from the hardest-hit neighborhoods are the public face of the clergy response to violence in Boston.

“I think symbolism is important, and what is unique about today is you have people across denominations and across faiths united in one purpose, and that is to see the end of violence in our communities,’’ Brown said. “Sometimes, it takes a crisis to bring people out, but I feel a sense of resolve that the tide is beginning to change in terms of people’s commitment.’’