Snubbed by Brown, supported by Giuliani 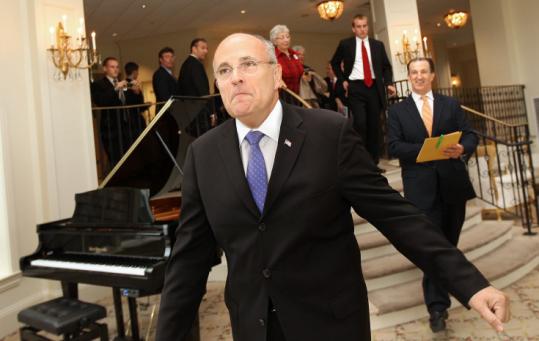 QUINCY — As Joseph D. Malone walked into a crowded ballroom at the Granite Links Golf Club, campaign donors and sympathizers rose from their coffee and muffins to applaud the Republican candidate for Congress. But as Malone waved appreciatively to the crowd, clapping abated and attendees craned their heads, searching for the morning’s honored guest.

After working on radio interviews and a commercial for Malone’s congressional bid, the former New York City mayor entered the room nearly an hour into the breakfast to raucous cheers. He approached the microphone, standing in front of an American flag, flanked by Malone and former governor Paul Cellucci.

“I can’t remember ever being as concerned for our country as I am now,’’ Giuliani said. “And this state did something great about it: You all elected Scott Brown at a time when we really needed it.’’

Giuliani had supported Brown, who won his long-shot bid in January for the US Senate seat left vacant by the death of Edward M. Kennedy.

But Brown himself is endorsing state Representative Jeffrey D. Perry, Malone’s most prominent opponent, for the Republican nomination for the seat to be vacated by Democrat William D. Delahunt.

During the event, Giuliani and others drew comparisons between Brown, the most recent GOP celebrity, and Malone, who was himself a young Republican star two decades ago. Malone served two terms as treasurer from 1991 to 1999, a stint that was marred by scandal when several top aides were later found to have organized a $9.4 million theft, the biggest theft of state funds in Massachusetts history.

About 52 percent of Massachusetts voters supported Brown in the 2010 senatorial election, and in the 10th Congressional District where Malone and Perry are waging their primary fight, Brown was even more popular, winning with about 60 percent of the vote. Brown’s decision to endorse Perry, a lawmaker from Sandwich who served with Brown in the State House, could influence some voters.

But at yesterday’s fund-raiser, Giuliani seemed unfazed by where Brown was throwing his political weight.

“The same reasons you’ve elected Scott Brown are why you’d elect Joe Malone,’’ Giuliani said at a press conference after the breakfast. “He understands the values that make America great.’’

“We really need to get spending under control,’’ Malone said in an interview after the event. “It’s not about growing government; it’s about reenergizing the private sector.’’

Asked about being compared to the man who endorsed his opponent for the Republican nomination, Malone said that Brown had earned the party’s respect and that he looked forward to working with him.

“I welcomed the fact that Mayor Giuliani mentioned Scott Brown because I do think he has become a great symbol of hope that a Republican can run with grace and victory,’’ Malone said. “My vision is, come November, we will be in the winner circle together and . . . that we will be a united party.’’

Marissa Lang can be reached at mlang@globe.com.