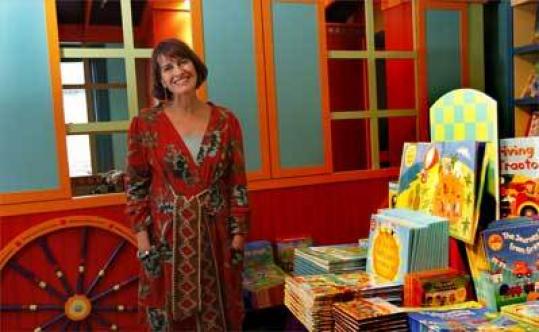 Nancy Traversy, cofounder and chief executive officer of Barefoot Books, said she has struggled to be taken seriously as a woman in business, but that isn’t stopping the 49-year-old Concord resident from expanding the operation.

“I think people take a look at us and they look at our brightly colored offices, and they see me and I’m usually dressed in some whimsical thing, and they think, ‘bimbo.’ ’’

More than once, Traversy said, she has been met with surprise over how complicated her children’s publishing business actually is.

“Certainly when I talk to bankers the immediate starting point is, ‘Oh, this is easy and I need to explain very carefully how financing works.’ I have to explain I’m a chartered accountant. I get that a lot.’’

She is one of three women entrepreneurs in the area who stand out not only for their success in establishing somewhat offbeat businesses but also for their growth plans despite the struggling economy. Traversy is exchanging a storefront in Cambridge for a new, larger space in Concord, which will fit programs that she hopes will expand Barefoot Books as a “lifestyle brand.’’

In Waltham, Standolyn Robertson is preparing to grow her organizing business, Things in Place, by hiring her first employees.

And in Hopkinton, Mary Murphy is preparing to franchise Hooray for Books, which helps busy parents by providing classes for young children combining cooking and reading.

Small businesses owned by women have been receiving special attention from both researchers and the federal government based on what is seen as their huge potential for growth. For example, the Center for Women’s Business Research and the National Women’s Business Council said in a study released last fall that only 20 percent of women-owned businesses have employees, which means 80 percent might be able to contribute more to the economy given the right help.

The council is launching a study this summer to try to determine why so few women business owners are bosses, according to Margaret Mankin Barton, executive director of the National Women’s Business Council, an industry group based in Washington, D.C.

That growth potential is key, particularly during a downturn in which women are showing incredible resilience as business owners, Barton said.

“I think they are more able to be facile and adaptive, and when the economy started going south they were able to retool their businesses and their approach,’’ she said. “They’re thriving despite the economy. Men are a little more traditional; I think women are more adaptive. We’re seeing that they are generally not willing to hear ‘no.’ ’’

In declaring the end of May “National Small Business Week,’’ President Obama noted that small businesses create two of every three jobs in the country.

As of 2008, there were 29.6 million small businesses — defined as having fewer than 500 employees — in the country, according to the federal Small Business Administration. The same year, the National Women’s Business Council counted 7.2 million small businesses with women as the majority owner, which translated into 16 percent of all American jobs.

But Margot Dorfman, chief executive officer of the US Women’s Chamber of Commerce, sees a different landscape than Barton. “There’s a lot of struggle out there,’’ she said.

A huge problem is access to capital, said Dorfman, and the chamber is lobbying for the Small Business Administration to lend directly to small businesses. Private banks have long had a better track record of lending to men than to women, she said, and the same pattern pops up in SBA loans, which go through banks.

Dorfman and Barton might see the data a little differently but what they agree on is the untapped potential that women represent — and the need to help them help the rest of the economy.

Mary Murphy is trying to tap into some of that help to grow her business, Hooray for Books. She is trying to franchise her Hopkinton cooking and reading school, which has expanded steadily since its establishment in 2001.

“Small business will get this economy rocking and rolling again,’’ said Murphy.

The name of her business tells only half the story, since it weaves together reading and cooking.

Murphy started with classes for half-day kindergarten students whose parents needed to fill the other half of the day. Now Hooray for Books has classes for mothers and toddlers as young as 20 months, 3-year-olds (Beginner Bakers), 4-year-olds (Chefs in Training), first-graders, and cooking classes for children ranging from age 7 to 11.

Murphy, a former kindergarten teacher with five children, hopes her business model will appeal to moms who are tired of the corporate life and want something different. Murphy said she is in talks with four women, from New Jersey, Framingham, and Milford, to launch franchises.

“I kept hearing, ‘I don’t want to go back to an office. I want to feel like I’m making a difference,’ ’’ she said.

“Having flexible schedules and a happy life is in some ways going to trump making a bazillion dollars.’’

An example lesson, “Baker, Baker, Donut Maker,’’ starts with an activity making a baker’s hat, followed by a memory game or floor puzzle related to the theme. There are worksheets and stories, including “Mr. Cookie Baker.’’

After about six months appearing on an A&E cable television show, “Hoarders,’’ as its organizing expert, Robertson has been getting so many client calls that she is ready to expand by becoming a boss.

“I’m getting ready to add employees because I give away more business than I keep,’’ she said.

She said the calls are from all over the country, and she has decided to stop saying no to out-of-state offers. Her plan is to hire three to five employees, probably on a part-time basis, and she thinks it would be an ideal job for mothers whose children are going back to school.

Robertson, who is 53, opened Things in Place in 2000, with her customers looking for help organizing the mounds of paper in their lives, their clothes, and their bedroom, which is a hugely popular trouble spot.

“You’d be surprised how many people can’t sleep in their bed’’ because of the stuff piled on it, she said.

Robertson said she is not the “spices in alphabetical order’’ type, but she does like for everything in her house to have a place where they belong. She hates to misplace anything. She does remember losing her keys — once.

“It’s been seven years and I’m still traumatized by it,’’ said Robertson. “I value my free time so much, I get really upset if things like that are digging into my free time.’’

Robertson credits her growth to all the volunteering she has done, most notably as president of the National Association of Professional Organizers.

“The biggest reason for my success, I think, has been what I have given back to my industry,’’ said Robertson.

Traversy credits the growth of Barefoot Books to thinking differently. Primarily a publishing business, the company has issued about 600 titles since its founding in 1992.

The books stand out for their creative art and themes around multiculturalism and environmentalism. Traversy and cofounder Tessa Strickland, who is based in the United Kingdom, envisioned Barefoot as a “lifestyle brand.’’

Traversy saw publishing as an ivory tower, disconnected from readers, so she put manuscripts out at the Cambridge store and asked customers to vote on which art they liked best for a particular story.

“We always followed a slightly different path,’’ said Traversy. “I’m trying to create this community of people that care about kids.’’

But the sagging economy also helped her expand. She is exchanging her Cambridge storefront, which closed at the end of April, for a larger space in Concord, and didn’t need a loan this time around, able to take advantage of lower lease prices.

The new Concord store, which recently held its grand opening, has room for yoga classes, arts and crafts activities, and birthday parties, she said.

The company has found two other somewhat offbeat ways to pursue growth. Barefoot opened an 1,100-square-foot space inside FAO Schwarz in New York City in 2008. And last summer, the company relaunched its “ambassador’’ program, which gets community members to promote and sell Barefoot Books via blogs, Facebook, and farmers markets, to name a few venues.