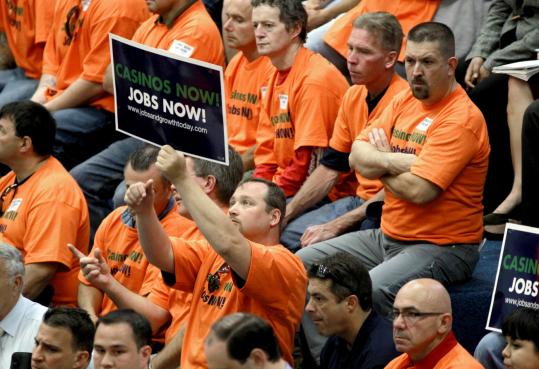 State senators got an earful from both sides of the heated casino debate yesterday as they held an hours-long hearing on the merits and perils of expanded gambling before they vote later this month on a bill to legalize three casinos in Massachusetts.

Robert J. Haynes, the tough-talking president of the Massachusetts AFL-CIO, urged lawmakers to ignore all those “well-meaning, sophisticated, educated people’’ who produce “statistic after statistic’’ to make casinos “look like a bad idea’’ for the state.

No, senators also have to consider the social costs of casinos, said Matthew C. Patrick, a state representative from Falmouth whose father was addicted to gambling.

The hearing came at a pivotal juncture in the long-running casino debate on Beacon Hill.

In April, the House passed a bill to legalize two casinos as well as slot machines at the state’s two horse tracks and two former dog tracks. Governor Deval Patrick supports legalizing casinos, but not slots at the tracks.

Many on both sides of the issue say the momentum has shifted, after years of debate, in favor of expanding gambling this summer. Many lawmakers, hoping to shore up budgets battered by the recession, have said they believe legalizing casinos in Massachusetts would help them recapture some of the estimated $1 billion that the state’s gamblers spend every year in casinos in other states.

Yesterday’s hearing was a chance for both sides to voice their arguments for what could be one final time before the Senate votes and the issue is settled behind closed doors by House and Senate negotiators.

Union workers, dressed in orange T-shirts that declared, “Casinos Now! Jobs Now!’’ packed the State House’s largest hearing room, cheering those who spoke in favor of casinos and booing those opposed to them.

Haynes, his voice booming, asked the workers a series of questions intended to dramatize the need for the jobs that casinos would create.

“Anybody unemployed here?’’ he asked, as the workers’ hands shot up. “Anybody been unemployed more than six months? Anybody been foreclosed on? Anybody worrying about mortgages?’’

Then he jabbed a finger at the members of the Senate Ways and Means Committee.

“That’s the pain and suffering that exists in the Commonwealth of Massachusetts,’’ he said. “You stand between the future of these people behind me, either a good future or a bad future. Do the right thing.’’

Mayor William A. Flanagan of Fall River, who is working with the Mashpee Wampanoag tribe to build a massive gambling complex in his city, said 18 percent of his city’s residents are unemployed, the highest rate in the state. “As a mayor, it’s getting tougher and tougher to create jobs,’’ he said, and legalizing casinos will help.

Gregory P. Bialecki, Patrick’s secretary of economic development, told the senators that he generally supports their bill, citing its similarities to the three-casino legislation Patrick introduced in 2007. Even though the economy has suffered since then, “Massachusetts still remains a strong and attractive market for casinos,’’ he said.

Opponents of casinos, vastly outnumbered, warned that casinos would drive up crime, cannibalize small businesses, and prey on vulnerable gamblers.

Casinos are “a fancy way of putting a tax on the poor,’’ said Senator Sonia Chang-Diaz, a Jamaica Plain Democrat. “I just don’t believe that’s the way we should be going as a state.’’

Natasha Dow Schüll, a cultural anthropologist at MIT, told the panel that slot machines are designed to maximize profits by getting people to gamble quickly, up to 1,200 times an hour, so they enter “the zone’’ in which they care not about winning but about continuing to gamble.

Casinos are based “on problem machines and problem business practices,’’ she said.

Casinos rely on compulsive gamblers for most of their profits, said Senator Susan C. Tucker, an Andover Democrat and a staunch gambling opponent.

The hearing stretched over more than six hours as witness after witness testified. It is not clear, however, if anyone succeeded in persuading the senators to change their minds.

Indeed, Senator Stanley Rosenberg, an Amherst Democrat who helped write the Senate’s casino legislation, opened the hearing by telling those in attendance that the issue had “been debated literally for decades’’ and that “every point of view, every study, has been heard, vetted, and considered.’’

Complete coverage
of gambling in Mass.