Inspired by relatives, he’s doing a world of good for refugees 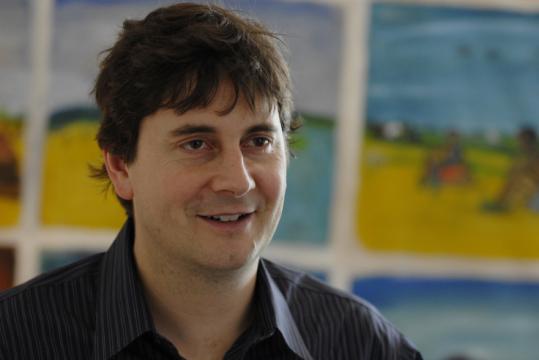 Sasha Chanoff, who grew up in Marlborough, has won a $100,000 award given to young Jewish humanitarian leaders. (Matthew Edmundson for The Boston Globe)
By Marissa Lang Globe Correspondent / June 7, 2010

Sasha Chanoff remembers growing up among relatives still traumatized by war and political persecution of decades past. He recalls stories of family members who fled the oppression of Jews in Russia in the early 1900s for the safety of the United States. Many of his relatives died in the Holocaust half a century later.

The 39-year-old Chanoff, who grew up in Marlborough, has spent the past decade rescuing recent victims of the world’s deadliest persecutions. Today, his work is being acknowledged with the 2010 Charles Bronfman Prize, a $100,000 award given annually to young Jewish humanitarian leaders.

“It’s completely intolerable that innocent people face the worst persecution just because they have a different background,’’ said Chanoff. “Refugees are on their own, but not by choice. And a lot of people, Jews in particular, have faced this for centuries.’’

In just five years, he says, his Cambridge-based nonprofit, Mapendo International, has helped evacuate more than 10,000 refugees from Sudan, Kenya, Burundi, and the Democratic Republic of Congo.

Chanoff said he knew during his years at Wesleyan University that he wanted to work abroad, but never imagined becoming entrenched in such a mission. It wasn’t until he began working with the Jewish Vocational Service in Boston in 1994, helping refugees find jobs, that he was able to connect the dots.

“It was like loud, clanging bells all began to go off in my head, saying, ‘This is what you’re supposed to do,’ ’’ he said.

In 1997, Chanoff organized a soccer tournament for refugees in the Boston area. More than 100 players, dozens of volunteers, and hundreds of spectators descended on Cambridge’s Danehy Park for a tournament that Chanoff said enabled refugees to exhibit their strengths.

At that tournament, Chanoff met Tufts University professor Sherman Teichman, who has since become a close friend and colleague. Teichman nominated him for the Bronfman award.

“He’s a remarkably engaging, charismatic young man, completely passionate and decisive about what he wants to do,’’ said Teichman, the director of Tufts University’s Institute for Global Leadership. “He’s a wonderful fusion between a person who has a vision and someone who has the ability to enact the vision.’’

In February 2000, Chanoff was asked by the International Organization for Migration to relocate 113 Tutsi refugees to new homes in the United States. At the camp he met Rose Mapendo, a widowed mother of seven.

She wasn’t on the list of those Chanoff was sent to rescue, but he decided to defy orders and evacuated Mapendo and her family. At that moment, he says, he realized that the refugee relocation system needed to change.

After returning to Boston, Chanoff met Teichman for lunch and, on a napkin at a Medford pizzeria, sketched out the basis for what would eventually become Mapendo International.

Chanoff listed the problems: More than 200,000 refugee resettlement slots have gone unfilled in the US alone; thousands of people are left to die for reasons they can’t control; many refugees flee camps to urban areas where no help is available.

Working closely with Rose Mapendo, Chanoff founded the organization that bears her name, which means “great love’’ in Swahili, one of the five languages Chanoff speaks.

Those close to him say the organization’s name not only recalls the plight of the family that inspired it, but also speaks to Chanoff’s approach to people.

“With his intellect and energy, he could have chosen a path in the corporate world and he would have done fabulously well. Instead, he’s devoted his life to helping people,’’ said Rick Wayne, an investment banker in Boston who serves as chairman of the board for Mapendo International.

Chanoff’s father, David, said it was no surprise to see his son dedicate his life to helping others. Humanitarianism has a long history in their family, he said.

“He was close to my parents, and they did come from this very socialist background where justice and equality were very important to them,’’ David Chanoff said. “It just seems like a very natural thing.’’

For six years, only one Bronfman prize, named after Canadian businessman and philanthropist Charles Bronfman, was awarded per year. This year, for the first time, two awards were given, one to Chanoff and one to Jared Genser, founder and president of Freedom Now. Crystal Noble, a spokeswoman for the organization, said the judges saw this as a chance to advance a broader human rights agenda.

When the Bronfman award is presented to him in October, Chanoff said, he doesn’t want to be the one at the microphone. He would rather have resettled refugees tell their stories, and has invited some to attend the ceremony.

Chanoff said he will use part of the $100,000 to find and evacuate women and girls in war-torn African nations.

“Girls are literally disappearing in refugee camps,’’ Chanoff said, noting that although 3,800 boys were brought to the United States from Sudan in 2001, only 89 girls were evacuated during the same period.

“Conflicts aren’t easy to end. Some people are stuck as refugees for decades,’’ Chanoff said. “The problems don’t just disappear. Someone needs to be doing this.’’

Marissa Lang can be reached at mlang@globe.com.