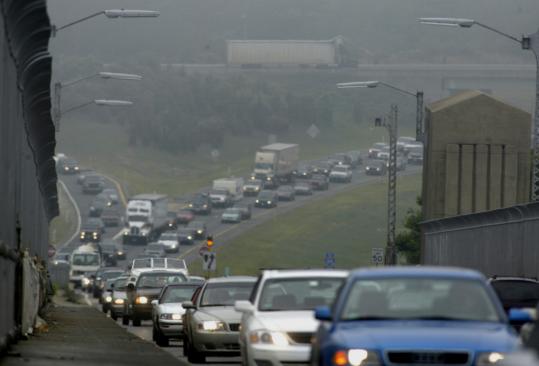 Drivers traveled across the Bourne Bridge in this July 2004 photo. Calls to the old 511 traffic alert system picked up in July as travelers heading on and off Cape Cod called for information. (The Boston Globe/File)
By Eric Moskowitz Globe Staff / June 6, 2010

The 511 saga continues. Last week, I wrote about the replacement of SmartRoute Systems, staffed by human beings, with the computerized Sendza service as operator of the state’s traveler information system.

The state was celebrating the June 1 switch as an innovation that would save millions while expanding service statewide and moving from a push-button system to one that drivers eventually will be able to operate with voice commands. (It turns out the state overstated the savings; more on that later.) But users of the old system were furious that the detailed human help they were used to had been replaced with broad updates from a machine.

SmartRoute fans have been calling and e-mailing, pleading for that system to be restored. That’s unlikely to happen.

But Sendza and the state say they are working to make the computerized system more responsive.

Sendza has incentive to improve, because all its revenue comes from advertising in a no-cost-to-the-public model; under the old contract, SmartRoute got $1.2 million a year from the state, no matter how many people used the system.

In promoting the change, Department of Transportation officials touted that $1.2 million annual savings, as well the savings of a one-time cost of $4.1 million to upgrade SmartRoute.

But neither savings is what it seems. When the state put the contract out to bid last year, SmartRoute, hoping to keep it, offered to trim its fee to about $490,000 a year, DOT spokesman Colin Durrant acknowledged this past week.

And he was mistaken about the $4.1 million. It wasn’t a one-time cost SmartRoute would have charged to switch from push-button to voice commands. Rather, it was what the state might have spent if it had stopped using private vendors and tried to build its own automated 511 system to be run in-house.

“I get that the state was looking to save money, but I think they ought to be more open about exactly what they’ve saved,’’ said Tom Higgins, a Boston-based administrator for the American Federation of Television and Radio Artists, the union representing SmartRoute’s traffic team. (Ten of the 13 employees were let go as a result of the lost contract; three are staying on to provide traffic updates for local television and radio stations.)

That’s still a fraction of the drivers on the state’s highways. And officials wondered if it made sense to spend tax dollars on a concierge service.

Callers to the old 511 did not just get recorded traffic updates about their favorite routes; if callers pushed a button to speak with an operator, they could talk to a live traffic reporter and get real-time advice on how to navigate around jams.

If more people had realized that service was available, more might have called. But state officials were leery of promoting a live phone call service amid efforts to discourage distracted driving.

The availability of human advisers is not all people miss. SmartRoute’s staff generated reports by monitoring a variety of sources, such as traffic cameras and police scanners, and the employees spoke the language of Boston drivers, referring to highway landmarks and place names.

The new computer system refers only to exit numbers. Sendza is not a traffic specialist, but a high-tech marketing company that provides text message, e-mail, and phone announcements.

For 511, Sendza buys traffic information in a raw data feed from another company, INRIX, and converts it into calls, texts, and e-mails for Massachusetts drivers.

The good news is that over the Memorial Day weekend soft launch, Sendza handled 81,000 calls without a technical glitch, even though the peak volume — 300 simultaneous calls Friday afternoon — was double what the state told it to expect.

The bad news is that the computerized data feed failed to alert Sendza to some severe accidents that left motorists steaming. A fatal accident last Saturday night on Route 3 southbound in Plymouth caused a complete shutdown of Cape-bound traffic for 2 1/2 hours, literally turning the highway into a parking lot. But 511 callers were told the road was clear.

“During our long wait we called 511 several times, trying to get an update,’’ a reader named Linda wrote. “For the entire 2 1/2 hours, 511 continued to report that all segments of Route 3 were clear!!!!’’

Linda noted that the live operators at SmartRoute would not just have told her there was an accident, they would have told her how to avoid it.

John Bernardi, Sendza’s executive vice president, said the problem was a result of a “disconnect’’ in the automated data feed. “We’re still working out some of the kinks,’’ he said.

“At the end of the day, we delivered a lot of information to lots of people here, we got handfuls of complaints, and we would expect that, given that this was the first weekend,’’ he said.

Bernardi said Sendza has already made multiple changes, including spacing out its audio segments so they are easier to hear, and adding a voicemail feedback option for users to leave comments.

He said the company intends to make other adjustments, such as adding more descriptions to exit names and breaking up reports into smaller geographic areas, so Mass. Pike callers near Boston don’t hear about traffic in, say, Chicopee, unless they want to.

“We built the system so it can be very, very flexible and malleable so that we can incorporate changes very quickly,’’ Bernardi said. “In fact, what I would say is we’ve already implemented more changes in 511 than SmartRoute probably made in the previous 10 years.’’

More real-time data to aid traffic reporting
On Thursday the MBTA released real-time data for 12 more high-ridership bus routes, in a form that allows hardware and software developers to produce alerts about when buses will arrive at stops at no cost to the T or its riders.

The T’s previous release of data about five popular bus routes (39, 111, 114, 116, and 117) last year yielded an array of applications virtually overnight, including not just iPhone apps and computer desktop widgets but also simple tools, like an LED display near the ice cream counter at the flagship J.P. Licks ice cream shop along the 39 line. The free release of data is a new business model for the T, which previously kept its data locked up while moving slowly toward investing in a rider alert system of its own.

The data includes not just bus locations — picked up from satellite transponders — but also arrival predictions generated (at a cost of $95,000 to the state) by NextBus, a California company that uses a patented algorithm to weigh those raw locations against traffic information, route maps, and a vast archive of previous travel times.

The release is part of the MassDOT Developers initiative, an open-source partnership between the Transportation Department and the Boston-Cambridge tech community that has received national attention. It has been spearheaded by Josh Robin and Chris Dempsey, twentysomethings who met on Deval Patrick’s gubernatorial campaign four years ago and have since become sought-after speakers on the open-government and public-transit lecture circuits.

Dempsey is leaving the DOT to attend Harvard Business School. Friday was his last day.

“He’s really going to be missed,’’ Robin said, at last week’s joint MBTA/DOT board meeting, as transportation officials hailed Dempsey for his service.

New locomotives for commuter rail
The MBTA is in the process of acquiring its first new commuter rail locomotives in 17 years — welcome news for riders, given that half of all the delays in the system are caused by failures among the aging locomotive fleet, said Richard A. Davey Jr., the MBTA general manager.

With approval last week by the T board of directors, the agency is finalizing negotiations with the Utah Transit Authority to purchase or lease up to nine locomotives. The T expects to purchase two or three of the locomotives at $3.5 million each and lease the rest.

The availability of the Utah locomotives presents a rare opportunity for the T to acquire unused, high-quality equipment from a sister agency that purchased more locomotives than it needed, according to the T. Minnesota’s Northstar Commuter Rail has been so pleased with a locomotive leased from the UTA that it now is in talks to purchase that engine outright, T spokesman Joe Pesaturo said.

The Utah locomotives are expected to burn about 20 percent less fuel and achieve a similar reduction in emissions over the T’s typical existing locomotives, which each year burn about 228,000 gallons of fuel and release 241 tons of nitrogen oxide. The T says that will translate into about $78,000 a year in fuel savings per locomotive. The Utah shipment will also help plug a gap before the arrival of 20 new locomotives that T leaders hope to purchase this summer; those locomotives would take nearly three years to manufacture and ship.