To travel across US to raise money for muscle illness 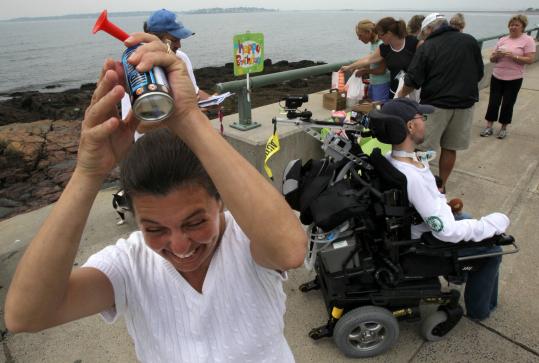 For most people, the prospects of undertaking a cross-country trip is daunting.

Not for Matt Eddy of Lynn, who set out yesterday morning on his second coast-to-coast trek to raise money and awareness for the disease he lives with, Duchenne muscular dystrophy, and to set a Guinness World Record for fastest cross-country trip by wheelchair.

Eddy has been in a wheelchair since he was 10, and his muscle function continues to steadily decrease. Now 33, Eddy only has use of two fingers on each hand. He will use them to operate the motorized wheelchair that whisked him from Lynn at 10 a.m. yesterday and will, if all goes well, power him to Long Beach, Calif. by early October.

Eddy’s respiratory therapist and friend, Ron Steenbruggen, 53, made the first trip with Eddy by bicycle and said he is accompanying him again, helping Eddy with all tasks, big and small. Steenbruggen, of North Reading, said his employer of 10 years, Shaughnessy-Kaplan Rehabilitation Hospital in Salem, would not give him leave time for the trek, so he resigned.

The pair aims to cover 30 miles on a good day, he said.

“By the end of the day I’m wiped, and then I take care of him,’’ Steenbruggen said. “I can’t believe that he does it. His will is amazing.’’

In 2006, Eddy established a charity, Matt’s Place Inc., to build accessible housing and to promote awareness and education, among other services, according to the charity’s website, officialmattsplace.org. Steenbruggen manages the charity.

Jay Duchin of Lynnfield custom built the camera mount on Eddy’s wheelchair and provided the high-definition camera it houses, all free of charge. Duchin said the camera will have enough power to record eight hours a day, documenting the trek for the world record bid.

Duchin, a film producer, said he would typically charge a few thousand dollars for the job.

“I had to take into account so many things, like how it would perform in the desert or in the cold or in the mountains,’’ said Duchin, 43. “It gives me so much satisfaction to see him rolling away thinking about the incredible journey they’re going to be on for the next few months.’’

Steenbruggen said the experience benefits both of the travelers, as well as the many people they meet on the road.

“You get a different perspective on the world,’’ Steenbruggen said. “After people talk to us, they aren’t worried about their car payment that was due today that they forgot to mail in.’’