Was en route to Charlestown court 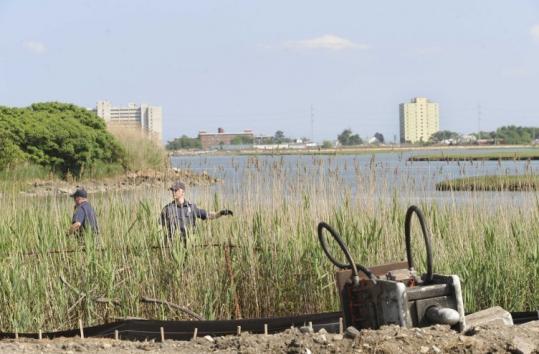 Stephen Woodard, 20, initially fled on foot and then allegedly stole a Department of Public Works vehicle that was parked with the keys inside, officials said.

Police pursued him through Chelsea, Revere, Everett, and Malden before he abandoned the vehicle, the Suffolk County sheriff’s office said in a statement. The search continued in a marshland area near Route 107 in Revere.

At the time of the escape, Woodard was being taken to Charlestown District Court to face drug charges when the van stopped at the East Boston courthouse, said Jake Wark, a spokesman for Suffolk County District Attorney Daniel F. Conley.

Trooper Thomas Murphy, a State Police spokesman, said last night that Woodard was still at large and troopers had suspended their search in the marshland area in Revere. State Police canine units and helicopters had combed the area during the day, Murphy said.

Security personnel at the East Boston courthouse would only say yesterday afternoon that Woodard did not escape from their facility.

They referred further questions to the sheriff’s office. Workers at several businesses near the courthouse said they did not see or hear the escape.

Woodard has a long criminal record and currently faces charges of armed robbery, assault with a deadly weapon, and possession of a Class B substance with intent to distribute, the sheriff’s office said.

Woodard had been arraigned Tuesday for allegedly robbing a man at knifepoint in Charlestown and assaulting three police officers, while he was out on bail on drug charges, Wark said. He was ordered held on $2,000 cash bail on Tuesday and his bail on the drug case was revoked, Wark said.

Wark added that Woodard flooded his cell at the district station in Charlestown after his arrest in the robbery. He said the flooding was handled “without incident.’’

The exact circumstances of the escape are under investigation by the sheriff’s department. A department spokesman could not immediately be reached last night for comment.

Travis Andersen of the Globe staff contributed to this report. Martin Finucane can be reached at mfinucane@globe.com.