Gay couple get a boost in winning bid to reunite 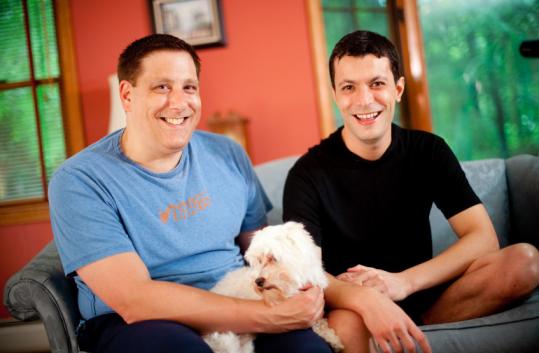 Tim Coco and Genesio Oliveira married in 2005, among the throngs who wed after same-sex marriage became legal in Massachusetts. But for nearly three years, they lived apart — Coco in Haverhill and Oliveira in his native Brazil — because federal law does not recognize their union.

On Wednesday, Oliveira returned to Massachusetts for an emotional reunion after federal immigration officials took the rare step of granting him permission to stay for one year on humanitarian grounds, clearing the way for him to try again for legal residency. His return followed personal appeals by Senator John F. Kerry, US Attorney General Eric Holder, and Homeland Security Secretary Janet Napolitano on their behalf.

“We’re overjoyed. Words can’t express it,’’ Coco, 49, an ad agency owner, said yesterday from their home in Haverhill, where he had decorated his yard with yellow ribbons to mark their long separation. “Every new moment now is a fresh new moment in our life.’’

Kerry called the couple heroes for persevering in their marriage.

“Here were two people who loved each other and were as committed to each other as you could ever imagine, and a quirk in the law was being allowed to keep them apart. I just wanted to do everything I could to reunite them,’’ he said in a statement.

Kerry also praised Napolitano and Holder, saying, “They really listened, and they righted this wrong.’’ Unlike heterosexuals, gays and lesbians cannot sponsor their immigrant spouses for legal US residency.

Oliveira was allowed to return because US Citizenship and Immigration Services, which is under the Department of Homeland Security, granted him humanitarian parole. Parole is a rarely used mechanism that permits otherwise inadmissible people to enter the United States for “urgent humanitarian reasons’’ or “significant public benefit,’’ said agency spokesman Chris Bentley. About 250 to 350 people are granted such parole every year, he said.

Humanitarian parole is temporary, but Coco said the couple might seek to reopen Oliveira’s case or try another venue so that he can remain permanently.

According to the 2000 US Census, some 35,000 same-sex couples include one US citizen and a partner who is not.

Mark Krikorian, executive director of the Washington-based Center for Immigration Studies, criticized the move, saying it seemed unfair to grant a special exception for Oliveira when so many others, such as earthquake survivors in Haiti, are clamoring to get into the country.

“It’s a side-door attempt at changing the Defense of Marriage Act,’’ he said, citing a 1996 federal law declaring that marriage is exclusively between a man and a woman. “That’s the problem with our immigration laws; it’s just this vast collection of exceptions for people who get the attention of a particular bureaucrat or judge or politician.’’

But Kerry and others contended that Oliveira was a victim of injustice. He had applied for asylum in 2002, saying a doctor had raped him in Brazil when he was 16 and he suffered discrimination in his native country because he is gay. An immigration judge found his story credible but rejected his asylum claim, noting that Oliveira had returned to Brazil twice without incident, including for his father’s funeral.

Oliveira was ordered to return to Brazil in 2007. By then, he had been married two years and living in Haverhill with Coco and their dog, Q-tip.

For nearly three years, the couple talked nightly over the Internet and lobbied lawmakers and others for Oliveira’s return. Coco estimates they spent about $250,000 in legal fees and other expenses on the case.

Oliveira missed the death of Coco’s mother in 2008 and lived in near seclusion just blocks from the doctor who had assaulted him as a teen in his hometown in eastern Brazil.

Though Brazil recognizes same-sex marriage for immigration purposes, violence against gays persists. More than 100 homosexuals and transvestites were killed last year in Brazil, according to the US Department of State’s human rights report.

Wednesday night, the couple celebrated with family and friends. They finished each other’s sentences. Oliveira whipped up a batch of chicken Alfredo, with strawberries for dessert.

“It seems like I never left,’’ Oliveira said. “This has made Tim and I stronger than ever. Our commitment for each other, I always say to him, is unbreakable.’’