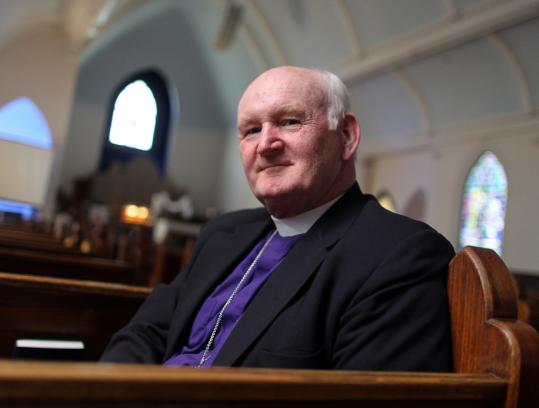 AMESBURY — A group of former Episcopalians who broke away from their denomination because of concern over blessings for homosexual couples, as well as other issues, have chosen a former Catholic church in this mill town on the New Hampshire border as regional headquarters for the more traditional Anglican denomination they are attempting to construct in the United States.

During the week of June 7, about 100 bishops and delegates from across North America will gather here at All Saints Anglican Church for a meeting of the year-old Anglican Church in North America, or ACNA. On the agenda: affirming Amesbury as seat of the New England diocese, home of the region’s bishop and site of the diocese’s cathedral.

Use of Amesbury, with a population of 12,500 and a location 40 miles from Boston, as a diocesan headquarters breaks with a centuries-old tradition of headquartering dioceses in major urban centers.

The cathedral will occupy the building formerly used by Sacred Heart Church, which for decades served as spiritual home to Roman Catholics, many of them French-Canadian mill workers and their descendants.

While they grieved when their church was put up for sale, some are celebrating now.

“I’m thrilled that they’re here,’’ said Patricia Perry, a former Catholic nun who owns Carriagetown Chocolates in downtown Amesbury and who hopes that visitors to the cathedral will support her collections for local children with cancer. “It’s just a little more special now that they’re going to make my old church into a cathedral.’’

Affordable real estate was one practical consideration that made Amesbury an ideal spot, according to Donald P. Roberts, archdeacon of the Anglican diocese.

The four-building campus, purchased in 2008 from the Roman Catholic Archdiocese of Boston, offers space in a former school and convent to help accommodate as many as 500 attendees at conferences. The town’s location at the junction of Interstate 95 and Interstate 495 puts it within a few hours drive of anywhere in the six New England states served by the diocese.

Locating a diocesan seat here makes Amesbury a stage for an ongoing drama within the Anglican Communion, which includes the Episcopal Church (USA), the Church of England, and 36 other provinces worldwide. It has more than 80 million members.

Many of ACNA congregations are former Episcopal parishes that grew disillusioned with the denomination when an openly gay bishop in New Hampshire, Gene Robinson, was consecrated in 2003 and when the Episcopal Church began blessing the relationships of same-sex couples.

Though the Episcopal Church is much larger, with 7,400 congregations, it has been losing members for decades. The ACNA, meanwhile, is growing, from 700 congregations a year ago to about 800 now. And although ACNA has not sought official recognition yet from the Anglican Communion, it received affirmation in April as “a faithful expression of Anglicanism’’ from a gathering of leaders of 20 of the communion’s 38 provinces.

In Amesbury, the cathedral could become an influential institution or a marginal one, depending largely on whether ACNA keeps growing, said David Holmes, an historian of American religion at the College of William & Mary and author of “A Brief History of the Episcopal Church’’ (1993). At first, the local impact may be subtle but significant, Holmes said.

“It will be good for the economy,’’ he said. “And the street scene is going to change. More people will be in clerical clothes, and they’re not going to be Lutherans or Roman Catholics. They’re going to be Anglicans.’’

The cathedral will draw Anglicans from across New England for major events, such as confirmations and ordinations, according to Bishop William L. Murdoch. It will also host international church leaders, such as African bishops who have played instrumental roles in launching the ACNA. Later this year, the campus will host three conferences for youth, young adults, and people interested in evangelism. Meanwhile, Murdoch said, the cathedral community will be an active player in North Shore outreach ministries.

“We have a great sense of partnership with other orthodox Christians throughout the region,’’ Murdoch said. “We’re in the process of testing whether we should establish a food ministry, a feeding program, for the poor and the homeless in the Newburyport-Amesbury area.’’

Despite the backdrop of religious politics, observers do not anticipate local tension as the regional headquarters takes root. On the contrary, they see burgeoning opportunities for everything from economic growth to cultural diversity and ecumenism.

“Bringing in folks from a broader range of communities, from other countries and other cultures, that strengthens the community,’’ said Mayor Thatcher W. Kezer III of Amesbury. “There’s more of a cosmopolitan flair, [and] it broadens the perspective. . . . It adds to the fabric of the community.’’

For businesses in downtown Amesbury, where at least five storefronts sit vacant, news of a growing institution nearby is welcome development.

Some local merchants see potential to do business with the cathedral directly. Terrance Gleason, owner of Greenery Designs, says he hopes to supply flower arrangements for major cathedral ceremonies, just as he has for All Saints’ Sunday worship services and weddings.

“I welcome the church because of their kindness,’’ said Gleason, who is also a member of St. James Episcopal Church in Amesbury.

“I’m grateful to have them here because they do participate and they do share. They do spend their money in the community. . . . Amesbury should be grateful they have that.’’

MacDonald can be reached at g.jeffrey.macdonald@gmail.com.