THIS STORY HAS BEEN FORMATTED FOR EASY PRINTING
Yvonne Abraham

It’s too late for that. The first spin of a Massachusetts roulette wheel may be years away, but a casino already is messing things up in Fall River.

The Mashpee Wampanoags and their backers want to locate a resort casino in the struggling South Coast city. And like gamblers looking to make fast money, officials in Fall River have convinced themselves that a long shot is really their best bet.

So desperate are they for a share of the loot that they’ve ditched a sure route to good, permanent jobs in favor of a something not at all sure — and not necessarily good.

They struck a deal to sell the tribe 300 acres of land for a casino. But that land was already spoken for: Everybody in the region agreed it would become a biotechnology park.

The BioPark was not some distant dream. Already, $35 million in federal dollars had been dedicated for a new highway interchange to the site. And the state had promised $17 million in grants for a University of Massachusetts Dartmouth biotech research facility that was to anchor the BioPark — a project UMass was just about to put out to bid.

Now, having offered up the land for a casino, Fall River will probably lose the UMass facility. And Governor Deval Patrick has said that if the casino goes forward, the state wants its money back.

Mayor Will Flanagan of Fall River is taking this giant gamble.

“We have between [8,000] and 12,000 citizens of our city looking for work,’’ he told me yesterday. “I envision casino gaming creating jobs immediately. I see biotech as the jobs of tomorrow. I believe we can do both.’’

The problem is, they might wind up with neither. The road to a casino will be uphill and arduous. First, the Wampanoags would have to get the Legislature to overturn a law expressly prohibiting a casino on the site, then win one of the two or three licenses that would be up for grabs if casinos are legalized in Massachusetts. If they don’t win a state license, the tribe would need Congress to pass a law allowing them to have the site declared sovereign tribal land, so that they could build a casino anyway.

That’s a lot of ifs for any city, much less this one. Just ask the very angry people of Middleborough, who thought they had a deal with the Wampanoags before they were jilted for Fall River. Still, Flanagan seems certain a casino will happen in his city. And eventually a biotech center, too.

But losing the UMass Dartmouth facility would be a huge blow to that prospect. Ten years ago, regional leaders agreed to help Fall River’s BioPark thrive, deferring to that city when it came to attracting biotech companies and infrastructure grants.

As the governor was telling Fall River to take a deep breath on Tuesday, Mayor Scott Lang of New Bedford was sitting in his yellow-walled office saying that deference to Fall River is all over now. Like Flanagan, Lang is pursuing casinos for his own city, but he says he won’t do it at the expense of biotech. The New Bedford mayor vowed to go after not just UMass, but all of the biotech companies that might have previously considered Fall River.

“They’ve eliminated the idea of exclusivity,’’ Lang said. “They have now decided that biotech is not a priority for Fall River or the region. There’s a vacuum that has to be filled, and we’re ready to step in.’’

If that happens, here’s my bet: Good things will come to New Bedford long before folks in Fall River realize they are chasing a mirage.

Yvonne Abraham is a Globe columnist. She can be reached at Abraham@globe.com. 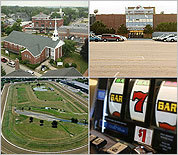