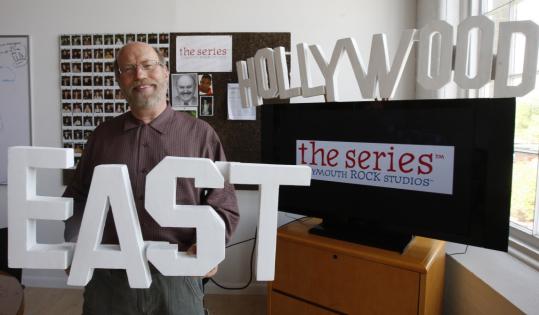 PLYMOUTH — David Kirkpatrick is no longer part of Plymouth Rock Studios, the company he cofounded three years ago, when he presented America’s Hometown with a plan to open a $500 million film production facility that would make the community “Hollywood East.’’

In a joint announcement yesterday, executives said Plymouth Rock Studios Holdings LLC, the real estate arm in charge of building the production facility and leasing its space, and Rock Entertainment LLC, the creative arm of the endeavor, “are no longer affiliated and will not have any direct ownership or management influence over each other.’’

The statement went on to say that “David Kirkpatrick will move forward as CEO and chairman’’ of Rock Entertainment. His profile was to be removed from the Plymouth Rock Studios website by the end of yesterday. He had been recently listed as contributor, rather than as one of the team.

Bill Wynne and Joe DiLorenzo will continue as Plymouth Rock Studios’ chief executive officer and chief operations officer, with their headquarters in the clubhouse of the Waverly Oaks golf course. Phase I of the studio project, which includes office space and sound stages, will be built on a 50-acre corner of the property. Waverly’s 18-hole golf course will coexist with the studio facility.

DiLorenzo is anxious to move forward. “The studio project has always been about bricks and mortar, and we need to focus on getting the thing built,’’ he said of Plymouth Rock’s mission yesterday. DiLorenzo said capital markets are opening up, so he believes it will be easier to secure financial backing. No announcements regarding project finances will be made until the deal is solid, DiLorenzo said.

Last November, the company announced it had secured $500 million in backing, only to have it fall through. Wynne remains confident studio construction will start by the end of the calendar year. Phase I should be ready to open in 2012. Much of the space has been preleased.

Kirkpatrick, meanwhile, is venturing off in his own direction, to continue working on the Hollywood East TV YouTube site for video sharing.

“We also plan to branch out, so it’s also a networking site,’’ Kirkpatrick said. “It will have a craigslist component, so people in New York and LA can look for potential crew, as well as filming locations. We hope it will draw more production to Massachusetts.’’

Kirkpatrick said yesterday’s announced split merely formalized a division that had been made between the real estate team and the creative members of the venture. But Kirkpatrick conceded that Plymouth Rock Studios’ mission was no longer the same as it had originally been, when the building facility and the creative efforts were intertwined.

“Now it’s really focused on being infrastructure, but that’s critical,’’ Kirkpatrick said. “You need the railroad tracks to run the trains.’’

In an e-mail, Kirkpatrick wished Plymouth Rock Studios “the best of fortune,’’ adding that both sides maintain good relationships.

“If called upon, we will be grateful to help in the endeavor any way we can,’’ Kirkpatrick wrote. “We hope one day that we will be one of Plymouth Rock Studios’ most attractive and enduring tenants.’’