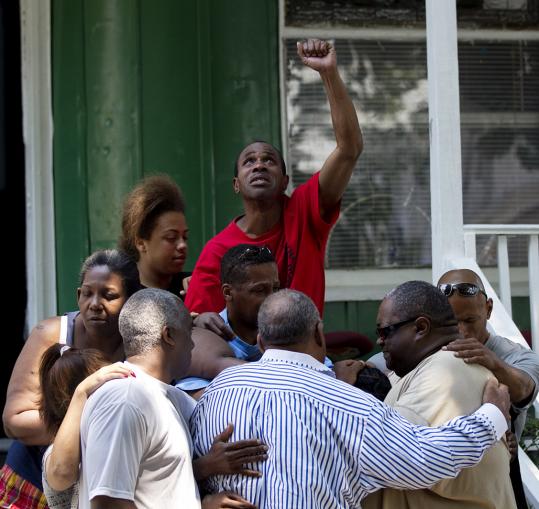 The day after Nicholas Fomby-Davis, 14, was shot to death, family members gathered in Dorchester to pray and comfort his father, Nathanial Davis Jr. (at right, in the tan shirt). (Yoon S. Byun/ Globe Staff)
By Maria Sacchetti and Maria Cramer Globe Staff / June 1, 2010

Every time his older brother jumped off his scooter, 14-year-old Nicholas Fomby-Davis begged to take it for a ride.

It was still light outside Sunday evening when his brother finally granted Nicholas one quick spin around the block.

Minutes later Nicholas was dead. Two young men allegedly snatched him off the scooter on Bowdoin Street. One held him down, while the other shot him repeatedly, according to an undercover officer who witnessed the attack.

“He was my baby boy,’’ his father, Nathaniel Davis Jr., a truck driver and church deacon, said, sobbing on his porch on a day he had planned to take Nicholas fishing. “He’s supposed to bury me. There was nothing he did wrong to deserve what happened.’’

The shooting capped a violent Memorial Day weekend in Boston and reignited calls for the city to more aggressively attack street crime as school prepares to let out for the summer. On Sunday, a 27-year-old man was fatally shot in Roxbury and a 24-year-old man wounded. Yesterday, police said, two teenagers were stabbed, one fatally, in Mattapan.

But it was the shooting of Nicholas, the second killing of a 14-year-old in three weeks, that galvanized police and prompted the city’s clergy to renew its call for the mayor to come up with a way to stop the violence.

Police said an undercover police officer witnessed the shooting, which happened so quickly he was unable to stop it. He called for backup and pursued the two suspects. Police arrested Crisostomo Lopes, 20, and a 16-year-old male, who was not named because he is a juvenile, both of Dorchester. They will be arraigned today on murder and gun-related charges in Dorchester District Court.

The motive for the shooting was unclear yesterday, and police would not say whether Nicholas, who was declared dead at Boston Medical Center about 8:15 p.m., knew his attackers. Police Commissioner Edward F. Davis said at a news conference that Nicholas was not involved in a gang and did not have a police record, though the youth recently had “contact’’ with police that Davis would not discuss.

Police officials, who spoke on the condition of anonymity, said they believe the shooting was gang-related. They said Lopes and one of Nicholas’s male relatives are involved in rival gangs and they are investigating the possibility that the boy’s death was a result of that feud. Davis said at the news conference that Lopes had a “significant record’’ involving firearms.

Nicholas Fomby-Davis’s death was the 26th homicide in Boston this year compared with 23 at the same time last year. Three weeks ago, a 14-year-old honor roll student, Jaewon Martin, was shot to death and a boy with him was injured at a basketball court on the Jamaica Plain/Roxbury line.

Clergy leaders in Boston yesterday called on Mayor Thomas M. Menino to come up with a plan to prevent violence.

“I think our mayor right now is still at a point of denial,’’ said the Rev. Bruce Wall of Global Ministries Christian Church in Boston, adding that he planned to discuss the issue on his radio show today at noon. “The longer we do not acknowledge that we’re at a crisis point, the worse it’s going to get in our city.’’

“It is the absence of such a coordinated deployment strategy which has the city reacting and not being sufficiently preventive,’’ he said.

Yesterday, Menino said he dispatched a task force of 75 officers to knock on doors in Nicholas’s neighborhood and distribute to residents a flier with photographs, but no names, of 10 males “known to associate with known criminals and gang members.’’ Police said they wanted to personally ask for help in rooting out the troublemakers.

Menino said the last time he used such a tactic was two years ago, and he vowed to keep it up to clamp down on violence.

The Boston Police Department later took the unusual step yesterday of giving the flier with the photographs to the media.

Davis said police were able to quickly arrest the alleged shooters Sunday because the undercover officer, Anthony Williams, had spotted Lopes and the 16-year-old youth ducking behind a car, acting suspiciously, and followed them. When they suddenly attacked Nicholas, the officer radioed for backup, and police arrested them and recovered a gun from the scene.

“We want to send a very clear message to these criminal communities that this is not acceptable in the city of Boston,’’ Davis said. “When someone picks up a firearm and commits this kind of a heinous attack on a young man in our city that there will be a coordinated and sustained response.’’

Nicholas’s death shattered the Norton Street neighborhood of well-kept three-deckers and maple trees where Nicholas resided, just around the corner from Bowdoin Street. Sobs filled the air in front of the family’s kelly green house. His father’s blue-and-white fishing boat was parked in the driveway.

Neighbors stared solemnly from their porches. “No Trespassing’’ signs abounded, in a vain attempt to keep the violence at bay.

Relatives said Nicholas was a student at Dearborn Middle School in Boston, a month away from graduating from eighth grade. He had a great sense of humor and loved to play the drums and go fishing. He dreamed of creating video games one day.

“He was just a sweet, . . . bright, playful kid that loved to fish and loved to play,’’ his mother, Latrina Fomby-Davis, said.

School officials said counselors would be available today for students.

“The principal tells me he was a good student who was maturing into a fine young adult,’’ said Matthew Wilder, spokesman for Boston public schools. “Certainly, this will be difficult for his classmates to deal with in the coming days.’’

Nicholas was the youngest of five children, with three sisters and an older brother. His mother said she had tried to keep them occupied and out of harm’s way. Nicholas took music lessons, went to the Baptist church where his father is a deacon, and had planned to attend the Engineering School, a public high school in Hyde Park.

She said she would attend today’s court arraignment. “I just want to know why. I need to hear why they did this.’’

Yesterday the entire neighborhood seemed to be grasping for answers. A relative of Franklin Monteiro, a neighbor gunned down in 2004, escorted Nicholas’s sobbing aunt to visit a memorial of lighted candles in front of a storefront church on Bowdoin Street, where Nicholas was shot.

“Why did they do this, take my nephew?’’ his aunt, Angela Fomby, asked passersby, her eyes swollen with tears. “Why’d they take him? Why’d they do it?’’

Globe correspondents Shana L. Wickett and Stefanie Geisler and John M. Guilfoil of the Globe staff contributed to this report.