Offshore, a new focus on safety

The push is on to curtail drinking and boating 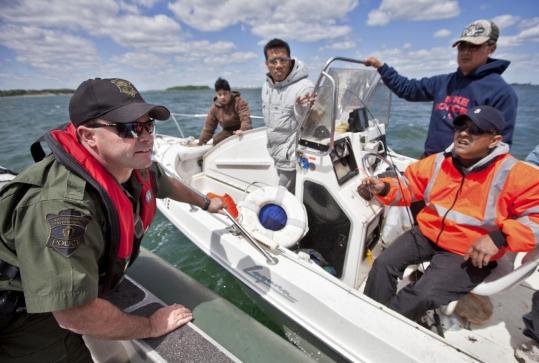 Jason DeJackome, an officer with the Massachusetts Environmental Police, spoke with some boaters in Boston Harbor to make sure they had proper safety equipment. (Photos By Aram Boghosian/For The Boston Globe)
By Sarah Schweitzer Globe Staff / May 30, 2010

In a state historically known for resistance to regulation, New Hampshire legislators turned heads this month when they voted to impose speed limits on the state’s biggest lake, Lake Winnipesaukee. Now, boaters will be restricted to traveling no faster than 45 miles per hour by day and 30 miles per hour at night.

The move comes after a number of highly publicized boating fatalities — including a 2008 case in which Erica Blizzard, a well-known New Hampshire marina operator, was found guilty of negligent homicide for an accident on Lake Winnipesaukee that killed her best friend. Her blood alcohol level had been nearly twice the legal limit, though the jury deadlocked on two alcohol-related counts.

In the aftermath of the tragedies, public calls have gone out across the region for greater safety on waterways, where boats whiz along at higher and higher speeds and drunken boating increasingly is viewed as a scourge and not a summer rite.

“Tolerance is getting lower,’’ said John Fetterman, director for law enforcement for the National Association of State Boating Law Administrators. “As the technology pushes these things faster and faster, there is a public demand for safety.’’

Nationally, recreational boating fatalities have decreased since the 1980s. But boating fatality figures still hover in the double digits in a number of states, including Massachusetts, where there were 10 boating fatalities last year, 13 the year before, and at least six this year, according to fig ures from the state’s Executive Office of Energy and Environmental Affairs.

Now, many say the time has come to further lower the numbers.

Law enforcement has responded with aggressive patrols despite dwindling budgets. This summer, law enforcement officials across the region will participate in Operation Dry Water, a national effort to increase checkpoints for drunk boat captains and educate boaters about the dangers of drinking and boating.

A challenge to reining in drinking and boating lies in the ubiquity of the practice. While a captain may not pilot a boat and drink alcohol, alcohol is allowed on boats — with some exceptions, such as in state parks in Massachusetts.

Also, excessive use can be difficult to detect on the water, where some traditional field sobriety tests — like walking in a straight line — are unusable, officials say.

Increasingly new methods are being employed, including a protocol being released this year by NASBLA that focuses on hand coordination and eye movement.

More difficult to break is the cultural acceptance of drinking and boating.

“Unlike driving, which people see as a means of getting from point A to point B, boating is very much a recreational activity,’’ said Captain Chris Baker of the Massachusetts Environmental Police, which patrols the state’s waterways.

“It’s summertime, people are out with friends and family and they look at the boat as a social setting.’’

So they grab a beer as they captain a boat.

“We still see people driving a boat and as you drive by, they tuck it under the gunnel — so you know that people know that it’s illegal,’’ Baker said.

In Massachusetts, a first offense “BUI’’ is punishable by up to 30 months in jail and a fine of $1,000; an offender may have his or her motor vehicle license suspended.

Some say that stiff laws and stepped-up enforcement have changed attitudes, but not enough.

“It used to be OK to drink and drive for the jolly old boys. These days, if you get caught there is a stigma now,’’ said Sergeant Alan Gillis of Maine’s Department of Inland Fisheries and Wildlife Warden Service.

“We’re not quite at that point with boating. A guy takes his boat out and has a beer and it doesn’t have that stigma, but it’s going in that direction.’’

In Maine, new demands went up for heightened boating safety after a 32-foot speedboat, named No Patience, slammed into a 14-foot fiberglass motorboat on Long Lake in 2007, slicing it in half and killing Raye Trott and his girlfriend, Suzanne Groetzinger.

The owner of the speedboat, Robert LaPointe, then 38, of Medway, Mass., and his companion were thrown into the water and swam to safety.

LaPointe’s speedboat was going so fast it flew out of the water and landed 130 feet in the woods.

A blood test showed that LaPointe’s blood alcohol content was 0.11 percent three hours after the crash. Maine’s legal limit to operate a boat or a motor vehicle is 0.08 percent.

A jury convicted LaPointe on two counts of aggravated operating under the influence, but deadlocked on the more serious charge of manslaughter. He is serving a three-year prison sentence.

Observers say that two key moves could dramatically decrease boating fatalities: increased use of life jackets and boating education. According to Coast Guard data, two-thirds of victims in boating fatalities drown, and only 10 percent of deaths occurred on boats where the operator had received boating safety instruction.

New England states require varying degrees of boating education. Massachusetts only requires it for operators between the ages of 12 and 15 who drive boats without adult supervision. New Hampshire requires training for people 16 and over who operate boats with more than 25 horsepower.

Speed laws are also a patchwork in New England — even within states. In Massachusetts, the limit is 45 miles per hour on inland waterways, except on certain bodies of water such as Lake Quinsigamond, which has lower limits, said Lieutenant Merri Walker of the Massachusetts Environmental Police.

In New Hampshire, a state that prides itself on its libertarian leanings, where motorcyclists may ride without helmets, the fight over speed limits on Lake Winnipesaukee became a pitched battle, running some six years in the Legislature.

“Some people wanted to be able to go as fast as they wanted to,’’ said Portsmouth state Senator Martha Fuller Clark, the prime sponsor of the speed limit legislation. “But there are people who kayak, who have felt intimidated by these boats going very fast.’’

Opponents argued that the state already limited boats to very slow speeds when near swimmers, other boats, or docks. They also argued that new limits would deter out-of-state boaters and hurt tourism.

But the bill enjoyed public support, in part galvanized by the Blizzard case.

Blizzard, as head of New Hampshire Recreational Boaters Association, had testified before the Legislature against speed limits for Lake Winnipesaukee.

Two months later, she and two friends had dinner and cocktails at a restaurant and then piloted across the lake to the home of Blizzard’s father to play their yearly Father’s Day prank of decorating his lawn with unusual items.

They were traveling back across the lake when the boat hit a ledge. She was convicted on March 18 and later sentenced to at least six months imprisonment.