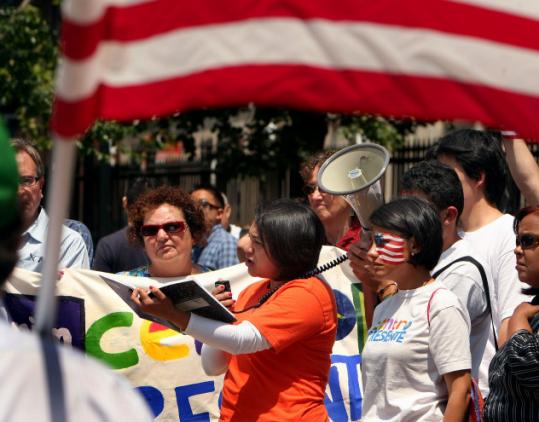 Several dozen activists gathered on the Boston Common yesterday to protest a measure passed this week by the state Senate that restricts access to state services for undocumented immigrants.

Calling the amendment “discriminatory’’ and “shameful,’’ leaders of several immigrant organizations called on Beacon Hill to reject the measure, which would have to make the final budget plan lawmakers approve for next fiscal year and be signed by the governor to become law.

“Those of you who have lost jobs, who are having a tough time making ends meet, we understand you, but you are putting your blame in the wrong place,’’ Elena Letona told the crowd, adding that the real culprit is “corporate greed.’’

The Senate crackdown, an amendment approved Thursday to the state budget, would bar the state from doing business with companies found hiring illegal immigrants, toughen penalties for creating or using fake identification documents, and explicitly deny in-state college tuition for illegal immigrants. In addition, it would require the state to give legal residents priority for subsidized housing and mandate that the state’s public health insurance program verify legal residency through the Department of Homeland Security. It would also set up an anonymous hotline to report illegal immigrants or companies that employ them.

The question was met with cries of “Justicia!’’ from the roughly 70 people milling in front of a fresh fruit stand and listening to the rally outside the Park Street T station. Some held signs with slogans such as “The Pilgrims were illegal immigrants.’’ Others had painted American flags on their faces.

Attendees represented several community organizations, including Agencia ALPHA, Everett-based La Comunidad, the Brazilian Immigrant Center, and the Dominican Development Center. At one point, a heckler yelled, “Go back where you came from!’’ But otherwise, the protest was peaceful.

Silvana Mena, an Everett resident with La Comunidad, brought her 6-year-old daughter, mother, and niece to the rally. She said she was disturbed by the Senate’s actions.

“I think that we can do something different — to protect and save the people,’’ she said. “We have to fight for different kinds of laws so everyone can stay and work here.’’

Mena said she wished that lawmakers would work instead on legislation to help undocumented immigrants get US citizenship or legal residency.

The Senate passed the measure amid heightened debate about undocumented immigrants fueled by the election season and Arizona’s passage of the toughest immigration law in the nation, which gives state and local police broad powers to enforce federal immigration laws.

An estimated 12 million people are living in the United States illegally. In Massachusetts, roughly 20 percent of immigrants — or 190,000 — are here illegally, according to the Pew Hispanic Center.