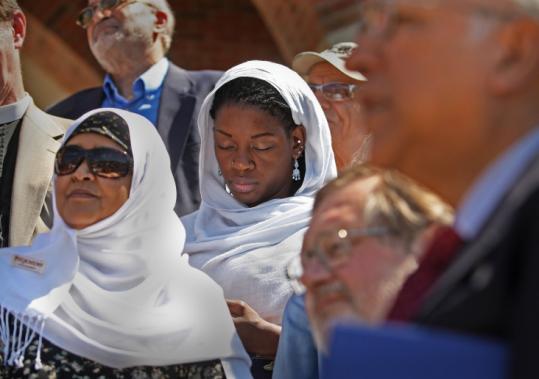 Zainab Elmi and Amenyohnah Bossman were among many gathered for the statement at the Roxbury mosque yesterday. (Essdras M Suarez/Globe Staff)
By Michael Levenson Globe Staff / May 29, 2010

Catholic, Protestant, Jewish, and Muslim leaders, adorned in the vestments of their respective faiths, stood shoulder to shoulder on the steps of a Roxbury mosque yesterday and strongly condemned state Treasurer Timothy P. Cahill for blasting Governor Deval Patrick’s conciliatory tone at a forum at the mosque last weekend.

Yesterday’s gathering included leaders from the Archdiocese of Boston, the Greater Boston Interfaith Organization, the Massachusetts Council of Churches, some of Boston’s most prominent black churches, and several Jewish temples.

One by one, they strode to a microphone in front of an audience of several hundred members of the mosque and said they were incensed that Cahill had equated Patrick’s support for the Muslim community to “playing politics with terrorism,’’ had accused the governor of “pandering to spe cial interests,’’ and had chastised Muslim leaders for not doing enough to rein in radicals.

“Those running for the gubernatorial seat, those at the State House, and anybody else that might think about it: not in Massachusetts! No bigotry!’’ the Rev. Hurmon Hamilton, president of the interfaith organization and pastor of Roxbury Presbyterian Church, declared to applause. “We will stand with one another and protect one another and fight for one another.’’

Cahill’s comments, coming as polls indicate he has slipped to third place in the governor’s race, also drew swift condemnation from the governor, whose campaign said Cahill was “fear-mongering,’’ and from Green-Rainbow candidate Jill Stein, who yesterday called Cahill’s remarks “inflammatory and racist.’’

Cahill is locked in a battle with Republican Charles D. Baker for conservative voters.

His remarks on Patrick came in a long written statement from his campaign Thursday, in which he suggested the governor needed to “look radical Islamic terrorism full in the face.’’

Cahill yesterday strongly defended his comments and said that those criticizing him are “interpreting them incorrectly.’’

Cahill said he was targeting Patrick for agreeing at the mosque to support the Muslim community’s requests; the governor said he would urge employers to give time off for Friday prayers and support sensitivity training for police. Patrick’s efforts, Cahill said, “should be more addressed at backing up police officers.’’

“I think the governor was right to go to the meeting, as are any of us,’’ Cahill said. “His answers to the questions are what I took offense to, and his overall response to terrorism.’’

In his statement Thursday, Cahill also said Patrick should have used the opportunity to urge Muslim leaders to “finally police’’ the “rogue elements’’ responsible for terrorism.

Citing the recent Boston-area arrests in connection with the failed Times Square bombing, Cahill said, “The overwhelming majority of Muslim-Americans are peaceable people who love this land, but the bottom line is, someone in Boston knew about this before it happened and didn’t speak up. That has to change.’’

“Terrorism is too important an issue to be used as a political football,’’ said the Rev. Ray Hammond, pastor of the Bethel AME Church in Jamaica Plain. “If we, or our political leaders, really care about our safety, the last thing we can afford is the cynical manipulation of our fears and the exploitation of our religious differences.’’

The Rev. J. Bryan Hehir, secretary for health care and social services in the Archdiocese of Boston, recalled how John F. Kennedy faced questions about his loyalty to the country because he was Catholic.

“We are here to say that every religion and religious community is too valuable to be instrumentalized by anyone,’’ he said.

Rabbi Eric Gurvis of Temple Shalom in Newton said members of the Roxbury mosque, the Islamic Society of Boston, were among the first to offer help when his temple was defaced with a swastika 18 months ago. He said Cahill’s “act of hatred and bigotry . . . is an even greater affront.’’

Lost amid the fury, said M. Bilal Kaleem, executive director of the Muslim American Society of Boston, was the fact that the 1,100 Muslims who met with Patrick last Sunday “denounced and condemned terrorism and extremism,’’ to “resounding applause’’ at the forum.

“The entire action, in fact, was a proactive step against even the possibility of radicalization,’’ Kaleem said.