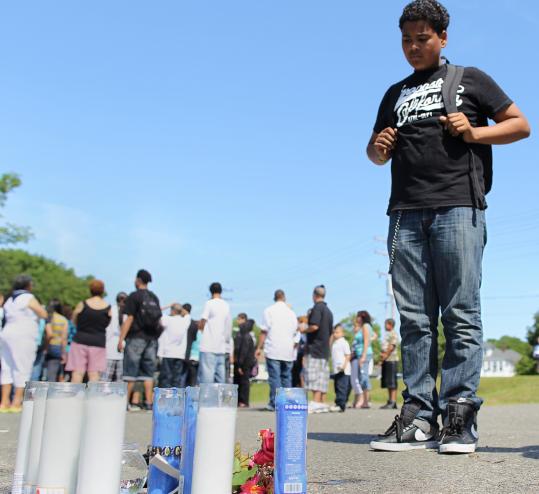 Edison Mercedes, 14, was at a makeshift memorial in Lawrence for his late classmate, Joshua Figueroa, who drowned. (Jonathan Wiggs/Globe Staff)
By Travis Andersen Globe Staff / May 29, 2010

LAWRENCE — Friends and relatives of 13-year-old Joshua Figueroa, who drowned Thursday in the Merrimack River in Lawrence, remembered him yesterday as a devoted brother and son with many friends and a love for baseball and computer games.

His cousin, Jayleen Ortiz, 18, said outside Figueroa’s home on Everett Street in Lawrence that he loved his twin sister, Shakira, and two brothers, Sergio, 8, and Christian, 11.

“He was close to them,’’ Ortiz said. “He was very attentive to his brothers and sisters.’’

She said he also greeted his mother, Omayra, warmly each morning.

Another cousin, who declined to give her name, said Figueroa loved playing computer games.

“We’re burying him with his laptop because he always said if anything happened to him’’ he would want to be buried with it, she said.

Ronnie Rivera, 16, a former neighbor of the Figueroa family, said Joshua had told his mother the same thing about a month ago. “The computer was his favorite thing,’’ Rivera said, adding that Joshua Figueroa was always willing to help his friends. “If you needed anything, he was there. He never got into trouble.’’

Rivera spoke to the Globe at a makeshift memorial set up near the scene of Thursday’s accident at Riverfront State Park.

Lawrence Police Chief John Romero said on Thursday that Joshua Figueroa and his friends were throwing a ball into the water and then swimming out to get it. Figueroa was pulled out by a strong current about 4:15 p.m. and went under. He was recovered about 45 minutes later by State Police divers. The youth was pronounced dead just after 7 p.m. at Lawrence General Hospital, Romero said.

More than 40 of Figueroa’s friends and teachers from the Emily G. Wetherbee School, where he was a seventh-grader, arrived at the memorial yesterday shortly after school let out with signs bearing farewell messages. A few of them cried.

Michael Lopez, 17, who said he played baseball with Figueroa at the local Boys and Girls Club, said he could play any position on the field. “He did everything,’’ Lopez said.

“The best thing he ever did was play baseball,’’ Rivera added.

Rivera said that Figueroa swam at the Boys and Girls Club and sometimes went in the Merrimack, like other children in the neighborhood. “He was a fast swimmer, too,’’ Rivera said. But Romero pointed out that signs are posted in the park prohibiting swimming in the river.

Lopez and Rivera said Figueroa’s death reminded them of an incident in 2002, when four boys drowned in the Merrimack.

Ortiz said his mother was too shaken to talk about her son yesterday. “His mom’s devastated,’’ she said.

Figueroa’s death came two days after a 22-year-old Lynn woman was pulled into the water off of a sandbar near Plum Island. The Coast Guard had been searching for the woman in the ocean near the mouth of the Merrimack River, but called off the search on Wednesday morning.