Fight breaks out in court after sentencing 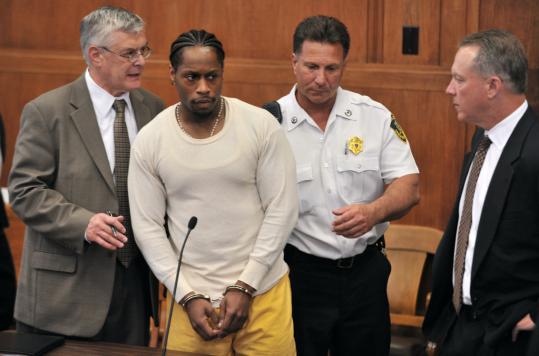 Above, defendant Paul Goode was led from a room at Suffolk Superior Court after a melee following sentencing. (Josh Reynolds for The Boston Globe)
By John R. Ellement Globe Staff / May 26, 2010

Moments after Terrance Jacobs’s killers were denounced by his family yesterday for their “animalistic’’ actions, the Boston courtroom exploded into conflict between relatives of Jacobs and the four men convicted of murdering the 16-year-old on a Dorchester street in 2007.

The melee erupted inside a Suffolk Superior courtroom after the men were given the mandatory sentence for second-degree murder — life with the possibility of parole after serving 15 years.

The high tension between the two groups boiled over when one of the defendants, Markeese Mitchell, 19, of Brockton, stood up and insisted he had been wrongly convicted.

“I just want to say I didn’t do it. It’s a sad case with a young boy dead, but I didn’t do it,’’ he told Superior Court Judge Judith Fabricant.

The clerk then announced that the men were sentenced to prison for their “natural life.’’

Relatives of Mitchell and the other defendants — Paul Goode, 27; Pedro Ortiz, 30; and Terrance Pabon, 20, all of Dorchester, who were convicted of beating and stabbing Jacobs to death to punish him for slashing the face of their friend — became agitated.

Another stood up crying, saying, “I love my baby,’’ then told the victim’s relatives, “Your people shot one of our people.’’

The shouting led to slapping and then furious attempts to land punches and kicks.

About a dozen court officers rushed into the melee, trying to separate the battling families. At least a half-dozen police officers, several of them homicide detectives in suits, also rushed into the fray.

At the same time, a man, later identified by police as 17-year-old Brandon Pight, leapt up from a rear seat in the courtroom, stood on top of the seat backs, and allegedly began trying to strike Jacobs’s relatives.

He was wrestled to the ground and charged with disorderly conduct and assault and battery on a public employee.

The court officers and police pushed the defendants’ relatives out of the courtroom and into the hallway.

There, a second man, identified as Reinaldo Ortiz, 26, was arrested on a disorderly conduct charge.

Nearly every court officer in the building was on hand when the melee began. Aware that disorder had broken out earlier during the trial, when a female witness balked at being taken into custody, Juan S. Delossantos, Suffolk Superior Court chief court officer, had closed other court sessions.

“They did a great job,’’ Michael Doolin, the defense attorney for Ortiz, said of the court officers.

“It was an affront to the victim’s family. It showed no respect for the court. It put everyone’s safety at risk. It can’t be tolerated,’’ said Conley, who praised the response by police and court officers.

According to Conley’s office, in 2007 Jacobs slashed a 14-year-old in the face with a razor and the youth’s friends were out for revenge.

On May 22, 2007, on Wilcock Street in Dorchester, Jacobs was beset, an attack that was interrupted when an ally started firing shots into the air. Jacobs ran onto neighboring Havelock Street, where he was knocked to the ground, beaten, and stabbed more than 20 times, prosecutors said.

Before the melee yesterday, Jacobs’s aunt, Marcia Griffith, recalled the painful moment when she saw her nephew on a hospital gurney, a white sheet pulled up to his chin.

“We were crying, inconsolable, and hoping he was just asleep and that he would wake up,’’ Griffith said.