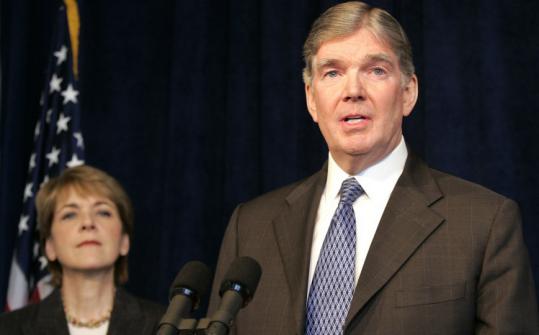 When government officials in Massachusetts need an outside lawyer to clean up a mess, many speed-dial the phone number of Paul F. Ware Jr.

In the past nine years, the senior partner at the Boston law firm of Goodwin Procter has been tapped to investigate alleged misconduct by Superior Court Judge Maria I. Lopez and to prosecute companies responsible for the ceiling collapse in a Big Dig tunnel that killed a Jamaica Plain woman.

In the early 1990s, Lawrence E. Walsh, independent counsel in the Iran-Contra investigation, picked Ware to prosecute Duane Clarridge, a former CIA official accused of perjury in connection with a secret shipment of missiles to Iran.

“I think he’s regarded as a go-to person who you can rely upon to take on challenging assignments,’’ said Judge Robert A. Mulligan, the trial court’s chief justice for administration and management, who issued a joint statement with SJC Chief Justice Margaret H. Marshall announcing the appointment.

Ware, for his part, said he savors the challenge and importance of investigating public scandals and corruption, even though he often faces daunting public expectations, as in the case of the July 2006 ceiling collapse that crushed 38-year-old Milena Del Valle.

Such assignments, Ware said in an interview, “are stressful, but that does not detract from what I would ultimately hope would be a fair result for the public and for the individuals [involved]. I’m doing something which I regard as important to the community and important to me as an individual.’’

Ware was cautious when asked whether he expected his investigation of hirings and promotions at the Probation Department would lead to criminal charges.

“That is the purpose of any investigation, which is to say for the independent counsel, or perhaps others, to make judgments regarding what, if any, civil or criminal action is warranted,’’ he said.

Ware, who is expected to be assisted in the investigation by colleagues at Goodwin Procter, has taken on the assignment at no charge to the state, said Joan Kenney, a spokeswoman for the SJC.

A native of Boston and a graduate of the University of Notre Dame and the University of Pennsylvania Law School, Ware oversees the litigation team at Goodwin Procter, one of the biggest law firms in the country. He joined the firm in 1974 and specializes in commercial, financial, and intellectual property litigation.

A former assistant US attorney in Massachusetts, he has been brought in repeatedly by government officials on complex investigations.

In 1992, Walsh picked him to lead a prosecution team in the case charging Clarridge with perjury and making false statements. Ware prepared the case, but President George H.W. Bush pardoned Clarridge before trial.

Nine years later, the SJC, appointed Ware as special counsel to the Commission on Judicial Conduct to investigate Lopez on ethics charges that stemmed from her videotaped berating of a prosecutor during sentencing of a child molester. After a series of disciplinary hearings, another judge recommended that Lopez be suspended for six months, but she resigned rather than accept the discipline.

Attorney General Martha Coakley, who turned to Ware in the Big Dig death investigation and cost overruns, said she knew Ware when she worked at Goodwin Procter. She said he is “someone who can come into a very complicated and many-layered situation to determine what the facts are and what should be done with those facts.’’

Ware and prosecutors working for US Attorney Michael J. Sullivan collaborated to recover about $610 million for the government.

The company ultimately agreed to pay $16 million in exchange for Coakley dropping the charge. Some bigger companies that were blamed for contributing to the collapse were allowed to resolve the matter civilly, and Jeffrey Powers, president of the company, complained that his firm was charged only because it was not a wealthy player.

But yesterday, even Max D. Stern, one of the Boston lawyers who represented Powers Fasteners in the case, predicted that Ware would do a good job.