Bill to combat bias is stalled in committee 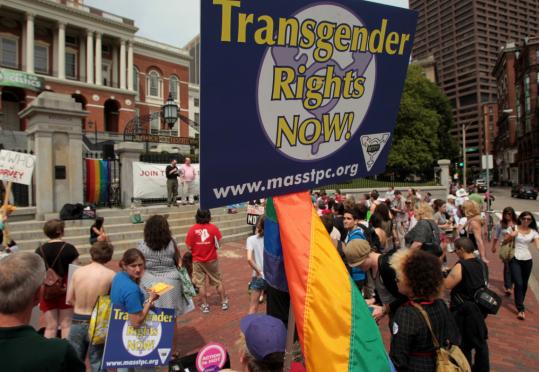 About 100 people attended a transgender rights rally in front of the State House. The group gained backers while marching. (Essdras M Suarez/ Globe Staff)
By Sean Teehan Globe Correspondent / May 23, 2010

After being hired for a job in Foxborough last year, Logan Ferraro, a 19-year-old transgendered man, received a call from his new boss.

On his application, he stated his gender as the one he identifies with: male. However, this didn’t match his Social Security data, which indicated he was female.

His boss had questions. After Ferraro explained his status, his boss assured him it would not be a problem.

The next contact Ferraro had with the boss, he said, was a letter with information on how to file for unemployment.

About 100 people gathered in front of the State House yesterday to hear speakers like Ferraro call for the Legislature to pass a bill protecting transgender rights that has been stuck in committee.

“I’m sick of being a second-class citizen,’’ Ferraro said. “I may be a transgendered man, but I’m nonetheless a man.’’

The bill would make workplace and housing discrimination against transgendered people illegal and protect them against hate crimes.

Activists noted that it was Harvey Milk Day, which would have been the 80th birthday of the gay rights activist and the first openly gay man elected to public office in California.

“If Harvey were alive today, he’d be at the forefront of the effort for full rights for transgenders,’’ said Don Gordon, an event coordinator for Join the Impact MA, the main organizers for the event.

The bill has stirred sharp opposition from critics who have dubbed it the “bathroom bill,’’ contending that it would make it easier for sex offenders to have access to young children in public restrooms by allowing people of both genders to use single-sex facilities such as bathrooms, gyms, and locker rooms.

“When all they have to talk about is bathrooms, we know we’ve won the argument on merits,’’ Gordon said.

Some in the crowd represented organizations such as Equality across America, the Mass Trans Political Coalition, the National Gay and Lesbian Task Force, the Massachusetts Gay and Lesbian Political Caucus, and other LGBT groups. Some people took part as individuals.

After the speeches, Keegan O’Brien of the LGBT Equality Coalition at the University of Massachusetts at Boston led the crowd to Park Street, gaining marchers as they made their way to the JFK Federal Building, holding signs and chanting.

They continued drawing attention as they made their way to Downtown Crossing and through the Boston Common, where onlookers took pictures, some unsure of what they were protesting.

The march ended back at the State House, where Gordon reflected that such rallies give needed attention to LGBT issues.

“There’s an intensity factor,’’ he said.