Former allies tee off on Brown

Others praise his vote for Wall Street reforms 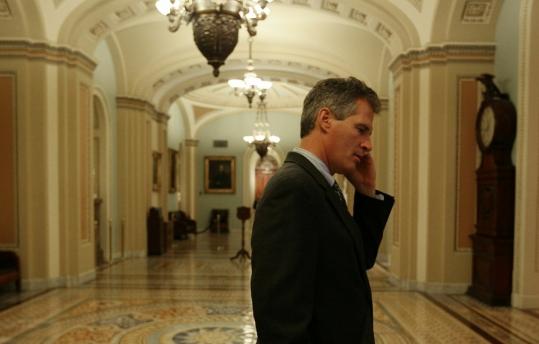 Senator Scott Brown, outside the Senate chamber this week, has been repudiated by some former supporters because of his vote in favor of a bill to overhaul Wall Street regulations. (Mark Wilson/Getty Images)
By Matt Viser Globe Staff / May 22, 2010

WASHINGTON — Senator Scott Brown yesterday drew scorn from former admirers who had hailed the Massachusetts Republican as a new voice for the conservative cause but now say he has abandoned them by joining Democrats to advance President Obama’s plan to overhaul the financial system.

As quickly as they had latched onto his campaign four months ago, they repudiated him yesterday through a flurry of blog posts, editorials, and Facebook messages.

“His career as a senator of the people lasted slightly longer than the shelf life of milk,’’ said Shelby Blakely, executive director of New Patriot Journal, the media arm of the Tea Party , which includes various Tea Party groups around the country. “The general mood of the Tea Party is, ‘We put you in, and we’ll take you out in 2012.’ This is not something we will forget.’’

But Brown also won praise from Democrats and some political observers for taking what they view as a shrewd step toward securing reelection in a state that typically has preferred its statewide Republican officeholders to be moderate. They said it also showcased his effort to make good on his vow to be independent and not always hew to the party line.

“It’s the kind of vote that he has to take in order to maintain a position of independence,’’ said Dan Payne, a veteran Democratic political consultant. “His reelection will be measured not by how loyal he is to the Republican Party but by how independent he is from the Republican Party.’’

On Thursday night, in one of his most significant moves since being elected four months ago, Brown provided crucial support to Democrats in helping push through a massive financial regulatory overhaul.

“Scott Brown did a very good job, and was very involved, and very straightforward on this,’’ said Senator Chris Dodd, the Connecticut Democrat and chairman of the Senate Banking Committee. “And he wanted to be part of the bill, and, in fact, was doing exactly what he campaigned on.’’

Brown declined requests yesterday for an interview, but his spokeswoman Gail Gitcho said the vote showed his independence.

“Scott Brown isn’t a foot soldier or a rubber stamp for [Senate majority leader] Harry Reid or Mitch McConnell,’’ she said. “He will vote with Republicans sometimes and Democrats other times, but 100 percent of the time, he will vote for the best interests of Massachusetts. That is the job he was sent here to do.’’

The Globe reported earlier this month that Brown had voted 84 percent of the time with McConnell, a record similar to his support of Republican leadership during his time as a state legislator. Shortly after being sworn in February as a US senator, Brown sided with Democrats on a jobs bill, a vote that also spurred criticism from the right.

Brown had wavered for weeks on financial reform. Initially, he attacked it as too much government interference into the banking system. He later joined a Republican filibuster to prevent Democrats from starting debate on the bill. Once debate began, Brown submitted several amendments but continued to criticize the overall thrust of the bill.

He then began to focus on a handful of changes needed to win his support. By Tuesday, he thought he had guarantees that those changes would be made and he told Reid that he would support moving to a final vote. The next day, however, Brown switched his vote because the guarantees were not firm enough — drawing the ire of Reid and putting Brown on the defensive.

Brown then sought help from leading Massachusetts Democrats in Congress to help gain the concessions. He did so at a time when there is an anti-incumbent fervor — which helped Brown get elected — and when politicians are being punished for working across the aisle. Brown reached out to Representative Barney Frank, a Newton Democrat, and Senator John F. Kerry.

“I take some private pride that he accepts the fact that I understand the needs of the Massachusetts institutions, and we were able to work out ways to make sure they are legitimately treated without undermining regulation,’’ Frank said in an interview.

Brown campaigned as someone who would end “business as usual’’ in Washington. But critics said he had turned into yet another Washington politician, cutting deals to help powerful interests in his home state.

The practice of demanding special deals was widely scorned during the health care negotiations when key Democrats refused to support the bill unless they won costly concessions.

Brown’s demands were somewhat different: He insisted on changes in the financial legislation that were not specific to Massachusetts, but which he said would help insurance and financial companies in the Bay State. For example, companies such as State Street and Liberty Mutual would have fallen under new regulations that would restrict the types of investments they could make.

David Kravitz, co-founder of the liberal blog Blue Mass Group, said with a mixture of admiration and sarcasm that Brown’s vote was a savvy move.

“Mr. Washington-is-broken goes to Washington and learns how things get done in Washington,’’ Kravitz said. “And then he does it.’’

Brown’s crucial support infuriated critics who believed that the financial legislation will lead to a bigger and more intrusive regulation. Americans for Limited Government wrote an online editorial called “A Lamentation of Scott Brown.’’

Some of Brown’s former supporters posted blistering comments on his Facebook page. “Scott Brown is a turncoat and I am ashamed that I did so much campaigning on his behalf,’’ wrote one. Another former backer wrote, “I am hereby officially un-liking you.’’

Much of the criticism appeared to be coming from interests outside Massachusetts. If the right continues to be disenchanted by Brown, it could hamper his fund-raising, most of which came from out of state.

Christen Varley, president of the Greater Boston Tea Party, said she doesn’t think people are “ready to throw him under the bus . . . but there’s a lot of questions and a lot of chatter . . . and a lot of perplexed voters.’’

Brown won sympathy from at least one other senator, Susan Collins, a Maine Republican who also supported the legislation — and who has been the subject of similar criticism for supporting Democratic initiatives.

“It’s never easy to oppose the leadership of one’s party,’’ Collins said in an interview. “But in the end you have to do what you think is right.’’

Susan Milligan of the Globe staff contributed to this report. Matt Viser can be reached at maviser@globe.com.