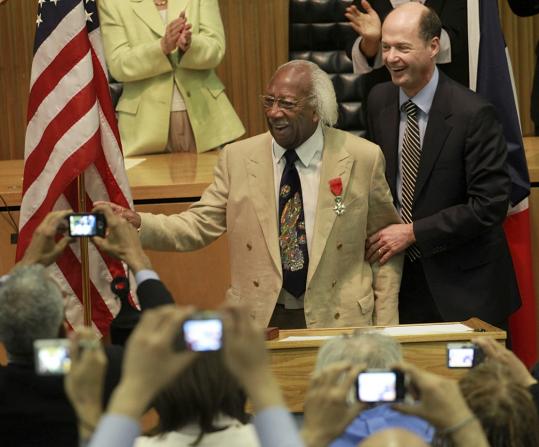 Marvin E. Gilmore Jr., 86, was honored at the State House for his World War II military service. With him was Christophe Guilhou, France’s consul general in Boston. (Suzanne Kreiter/Globe Staff)
By John Ellement Globe Staff / May 21, 2010

Marvin E. Gilmore Jr. has cofounded a bank and helped revive parts of Roxbury. He owns a Cambridge nightspot and at 86 is considered one of the most stylish men in Greater Boston.

Yesterday, however, Gilmore was honored for what he did as a teenager: drop out of school, enlist in the US Army, and storm Normandy’s beaches on June 6, 1944, even though as an African-American, he said, he faced ruthless racism from fellow soldiers.

At a State House ceremony, Gilmore was awarded the Legion of Honor, France’s highest civilian award, for his role in liberating France and for his refusal to let discrimination hold him back while in the Army and at home afterward.

He is the first African-American in New England to be awarded the Legion of Honor, said the office of the consul general of France in Boston.

“Marvin Gilmore’s heroic service in World War II alone is enough to recommend him for the Legion of Honor,’’ said Christophe Guilhou, consul general of France as he prepared to honor Gilmore. “But his bravery and dedication in the face of discrimination make Marvin a true hero.’’

On D-day, when Allied forces invaded France, Gilmore was assigned to an antiaircraft unit that provided cover for American soldiers landing on Utah and Omaha beaches. Gilmore, who had hoped to serve in a band but ended up in a combat unit, finished his time in Europe by attending the Scottish Academy of Music in Glasgow.

Back in the United States, Gilmore cofounded the Unity Bank in Roxbury, the first black-owned commercial bank in Boston, and played key roles in redevelopment of the Southwest Corridor, the Newmarket industrial district, and the CrossTown industrial park near the Boston Medical Center in Roxbury.

He has been president of the Community Development Corporation of Boston since 1973. He owns The Western Front nightclub near Central Square in Cambridge In 2007, the Globe chose Gilmore as one of Boston’s most stylish people.

At the State House when Guilhou pinned the Legion of Honor onto Gilmore’s lapel, family, friends, and supporters burst into applause.

“I take this honor for all my fellow veterans who have passed away, the ones that fought with me on Normandy beach,’’ he said. “If you live in America, if you live in France [today], you just don’t know what war was like. I went through hell.’’

France needed to be liberated, he said, and America protected. “And that has happened,’’ he said. “We are free.’’

The Rev. Charles Stith, the former US ambassador to Tanzania now at Boston University, also spoke at the ceremony. He said he rented space from Gilmore’s parents when he and his wife moved to Boston in the 1970s. Gilmore’s parents, he said, would be exceptionally proud’’ of the life Gilmore has led.

Stith then thanked Gilmore for his efforts to end discrimination against African-Americans and for his persistence in building businesses and supporting community development in Greater Boston.

“Thank you for opening the doors of opportunity,’’ Stith said. “And for making sure once you got through, you left the doors open for us to follow through.’’