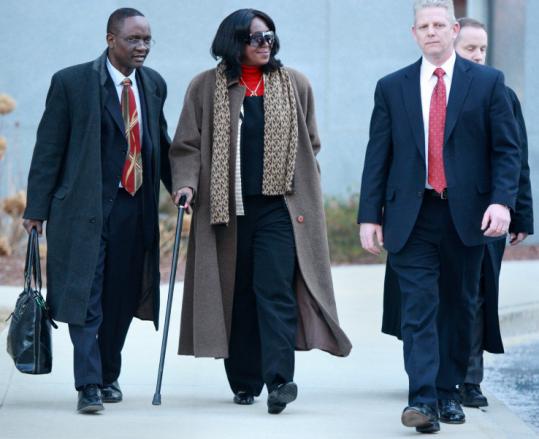 President Obama’s aunt, Zeituni Onyango, was escorted from the JFK Federal Building to a waiting car after her hearing in February. (Jonathan Wiggs/ Globe Staff/ File)
By Maria Sacchetti Globe Staff / May 18, 2010

President Obama’s aunt, Zeituni Polly Onyango, an enigmatic figure who exploded onto the national scene in 2008 while living illegally in Boston, has been granted permission to stay in the United States, the immigration court said yesterday.

Judge Leonard I. Shapiro granted her asylum Friday in Boston, three months after Onyango’s lawyers said she feared violence and health risks if she were forced to return to her native Kenya. The ruling clears the way for her to apply for legal permanent residency in a year, and US citizenship after five years.

Onyango, the half-sister of the president’s late father, declined to comment.

“I’m tired,’’ Onyango, who lives in public housing in South Boston, said by telephone. She referred questions to her lawyer.

Shapiro issued the ruling after hearing hours of testimony from Onyango and two medical doctors in a closed-door hearing in Febru ary. Because asylum cases are confidential, the decision was not made public, said court spokeswoman Lauren Alder Reid.

Onyango’s lawyer, Margaret Wong, did not respond to numerous requests for an interview. Before the hearing in February, Wong told reporters that Onyango would testify that she feared tribal violence if she were forced to return home. She and Obama’s father were members of the Luo tribe, a minority in Kenya.

Asylum seekers must show that they fear persecution in their native lands based on race, religion, nationality, political opinion, or membership in a social group.

Wong said Onyango would also ask to remain in this country for health reasons. She suffers from Guillain-Barré syndrome, an autoimmune disorder.

Now, Onyango will be allowed to receive a work permit, a Social Security number, and a driver’s license or state identification card, Wong said in a statement issued yesterday.

Shapiro’s ruling caps a long, odyssey for Onyango, who first met Obama in 1988 when he visited Kenya while in his 20s. In Kenya, she was his guide and family storyteller, sharing stories of his father, who died in a 1982 car crash, and how he had helped her escape an abusive marriage when she had no money. Barack Obama Sr. was absent most of Obama’s life.

The president included Onyango in his 1995 memoir, “Dreams from My Father,’’ but has said that he was unaware of her immigration issues before the case came up.

He vowed to stay out of the case. The White House did not respond to requests for comment yesterday.

However, the decision unleashed a firestorm of criticism from those who felt Onyango received preferential treatment because of her relationship with the president.

“What just happened for her almost never happens for other illegal aliens,’’ said William Gheen, president of Americans for Legal Immigration PAC, a national organization. “The rule of law is out the door.’’

Roy Beck, president of NumbersUSA in Washington, the largest national group favoring restrictions on immigration, called it “an abuse of the asylum policy.’’

Dan Stein, president of the Federation for American Immigration Reform, called on Shapiro to release the decision publicly.

“Given Onyango’s relationship to the president, the American people have a right to know on what grounds Ms. Onyango’s asylum was granted,’’ Stein said in a statement.

But others praised Shapiro and said it seemed legitimate to consider Onyango’s case, since she had unexpectedly become a public figure who would be at greater risk if she were forced to return to Kenya.

“I’m sure she had a fair hearing, which is what our system is all about,’’ said Anthony Drago, chairman of the New England chapter of the American Immigration Lawyers Association. Asylum “is a very difficult standard to meet. If he granted the case, there was a very good reason to do it.’’

William Joyce, an immigration lawyer and former judge, said Shapiro is an independent judge with the “utmost integrity.’’

“Any notion that he was just doing what he was told is ludicrous,’’ said Joyce.

Onyango, who turns 58 this month, came to the United States in 2000 seeking a better life and applied for political asylum in 2002, but was rejected in 2004 and ordered to leave the country.

Instead, she remained undetected until just before Election Day, when she was discovered living quietly in Boston. Because of the publicity, she fled to stay with relatives in Cleveland. There, she hired Wong, who filed a new petition to reopen her case. Shapiro agreed to reopen Onyango’s case in December 2008. His decision was expected by May 25.

The US government’s lawyers have 30 days to appeal the decision, according to the immigration court. US Immigration and Customs Enforcement, which handled the government’s case, declined to comment.