Church of many colors

Over decades, Roxbury’s Resurrection Lutheran transforms itself from all-Swede to multiethnic 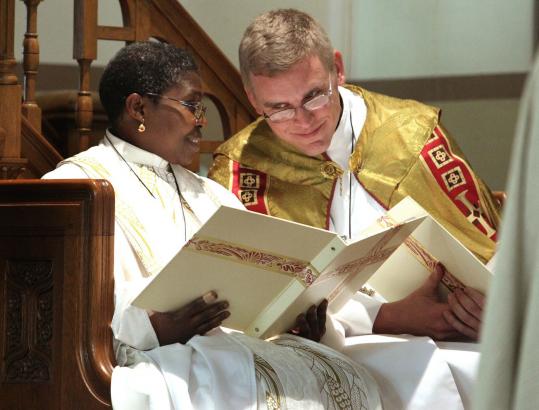 Ten visiting pastors in snowy robes glided down the center aisle of Resurrection Lutheran Church in Roxbury on a recent Sunday afternoon. The congregation stood, singing, to greet the Ghanaian woman walking behind them: the new pastor, the Rev. Miriam Sedzro.

They sang in English and Swahili; tambourines and maracas played alongside handbells and an old pipe organ. The congregants were immigrants from Africa, Central America, and the Caribbean, as well as Americans of every hue.

“I call it the United Nations church,’’ said Udom Smith Udom, the Nigerian-born president of the church council, who wore a sparkly pink robe to the service.

Resurrection, founded 136 years ago by a tightknit community of Swedish immigrants, is a study in the changing demographics of Christianity in Boston and throughout the world. In its early years, the congregation worshiped in Swedish. In recent decades, thanks to a decision by the church elders to stay in Roxbury and reach out to non-Scandinavians, the church has become one of a small but growing number of multiethnic churches in Greater Boston.

“I think increasingly you will see a sprinkling of these kinds of churches all over most metro areas,’’ said Nancy T. Ammerman, a professor of the sociology of religion at Boston University. “I don’t think it’s going to be the dominant model, but . . . alongside the standard white-bread congregation and the all-immigrant congregation, there will be this growing mixture of diverse congregations: the pan-Asian, pan-African, and truly multiracial and multiethnic.’’

Today, nearly two-thirds of Christians worldwide live in Asia, Latin America, and Africa, according to the Center for the Study of Global Christianity at Gordon-Conwell Theological Seminary. A tide of these Christians has arrived in the United States since 1965, when immigration quotas on non-Western Europeans were lifted, said Luis Lugo of the Pew Forum on Religion and Public Life.

At the same time, black and Hispanic families in the United States are having more children than whites, Lugo said, accelerating what demographers call “the browning of America.’’ Church attendance among white Catholics and mainline Protestants has dwindled.

But these dynamics have not always led to more diverse congregations.

In Boston, a city where one in four residents was born outside the United States and nonwhites make up a slight majority of the population, hundreds of new churches have sprung up in the last decade alone. But many of the new churches are strongly identified with a single community, Haitian Baptist, for example, or Brazilian Pentecostal.

But Ammerman and other specialists say multiethnic congregations, like Resurrection Lutheran, are beginning to emerge as children of immigrants who arrived in the 1960s, ’70s, and ’80s join congregations outside their parents’ ethnic enclaves.

Rudy Mitchell, a senior researcher for Emmanuel Gospel Center in Boston’s South End, points to a number of area churches that, like Resurrection, have become multiethnic in recent years, including the Central Assembly of God in East Boston, Church of the Holy Spirit in Mattapan, Hyde Park Presbyterian Church, and St. Mary Antiochian Orthodox Church in Cambridge.

“It may be that the church is in the neighborhood,’’ drawing people because of convenience, he said. “It may be there’s a style of worship they like.’’

Resurrection Lutheran is affiliated with the Evangelical Lutheran Church of America, a denomination that is 97 percent white and is best known in popular culture as the spiritual home of the stolid Scandinavian-Americans of Lake Wobegon, radio personality Garrison Keillor’s fictional small town in Minnesota. The ELCA is the largest Lutheran denomination in the United States. In 2008, there were about 4.6 million members nationally, including nearly 25,000 in Massachusetts.

The Swedish Lutherans who built Resurrection organized their first congregation in 1874 and completed their first church in the South End in 1881; they decided to move to Warren Street in Roxbury to be closer to the city’s Swedish immigrant population, according to a church history. A visiting Swedish archbishop laid the cornerstone of Emmanuel Lutheran Church, as the congregation was then called, on Thanksgiving Day in 1923; Mayor James Michael Curley spoke at the occasion.

By the 1950s, Swedish services were held once a month, and most of the congregation had moved to the suburbs. But people traveled back to their beloved church each Sunday.

Kurt Wallin, who joined in 1951, recalls how the whole church would have one giant birthday party each spring. For desert there was ostkaka, a kind of Swedish cheesecake, with lingonberries. “People were so close,’’ he said.

As black families moved to Roxbury and a few began joining the church and attending services, some Swedes grew “kind of edgy and nervous about it,’’ he said. The congregation finally called a meeting to discuss the issue, and Carl Davison, the church treasurer, stood up.

“I can remember word for word,’’ Wallin said. “He says: ‘God has given us all a talent to work and to make money. We invested it in this facility, we dedicated it to God, and there’s not one soul that we can stop from coming in here and worshiping with us.’ And that was the end of it.’’

But that wasn’t quite the end of it. Many Swedish families left, said Davison’s widow, Anna, a Swedish immigrant who, at 101, is the church’s oldest member. She and some of the other church women would walk the neighborhood with the pastor, inviting new people in.

“We went up and down the street, welcoming them to come to church,’’ Davison recalled with a smile. “There is one God, and God is for everybody.’’

Some black families sought out Resurrection, like Arneize Kelley, 77, of Jamaica Plain. Born and raised in North Carolina, she married a Lutheran and joined a black Lutheran church in Winston-Salem. When they moved to Boston in the early 1960s, they joined Emmanuel.

In 1965, Emmanuel merged with nearby St. Mark’s Lutheran Church, which had German roots and many black members, to form Resurrection. By the time Randy Rice arrived as the new organist in the mid-1990s, there was a contemporary service at 9 a.m. filled with gospel music, and a traditional service at 11 a.m. where people sang Lutheran standards like “A Mighty Fortress is Our God.’’

Rice, who was raised Irish Catholic but became Lutheran because he is gay and felt unwelcome in the Catholic Church, began to make changes. He commissioned a friend to create the Black Madonna banner that now hangs from the organ loft. Over time, he said, most of the art depicting of Jesus as blue-eyed and blond slowly disappeared, and the congregation merged its two services to a single one at 10 a.m. Rice chose music from around the world, blending in older Lutheran hymns here and there.

“It’s a thousand details, but they all make a difference,’’ he said.

In recent years, Resurrection has struggled. A beloved pastor left in 2004, and the congregation had not had a permanent pastor until Sedzro’s arrival. Attendance, which could hit 200 on a regular Sunday in the midcentury, has shrunk to 50 or 60 people a week.

Sedzro has big plans for the little church. One of 12 children, she attended Presbyterian, Methodist, and Catholic schools before joining a predominantly black Lutheran congregation in Queens, in New York, then attending Lutheran Theological Seminary at Philadelphia.

In Roxbury, she envisions a summer enrichment program for children in the community and a parenting class for neighborhood moms. She plans to find money to fix leaks in the building and revamp some of the church’s previous ministries.

“I have great people who are ready to see the church come back,’’ she said.

Among them is Mary Ostrem, a public health worker from Hyde Park who was raised Lutheran in California and found Resurrection through its website. She is now one of its most active members.

“There were people from everywhere, and they had leadership roles; they weren’t sitting in the back,’’ she said. “I realized: This is what the kingdom of heaven is going to be like.’’