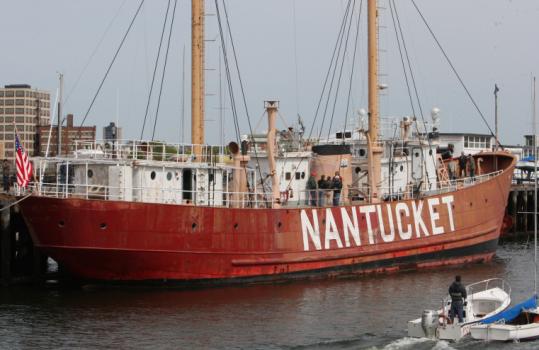 The Nantucket Lightship LV-112, decommissioned in 1975, is docked at Charlestown Navy Yard, destined to be a museum. (John Blanding/ Globe Staff)
By Peter Schworm Globe Staff / May 12, 2010

For nearly 40 years, the Nantucket Lightship LV-112 shone the way home, guiding countless ships past the treacherous Nantucket Shoals. But after it was decommissioned in the 1970s, the vessel bounced from port to port like a vagabond, unable to find safe harbor.

Under a brilliant blue sky yesterday, the storied vessel, the oldest and largest lightship ever built in the United States, finally returned to its home port of Boston, for the first time since it was decommissioned in 1975.

“She’s back,’’ said Robert Mannino Jr., who bought the aging ship in October for $1 after learning it was in danger of being sold for scrap. “Where she should be.’’

Mannino, a 58-year-old marketing consultant from New Hampshire who grew up sailing and became an avid shipwreck diver, said he couldn’t allow the floating beacon to be destroyed. He hopes to restore it and convert it to a permanent museum and educational center.

“We want people to learn from it,’’ he said. “To really see what lightship life is like.’’

Built in 1936, the 150-foot Nantucket once sailed from the Coast Guard station in Boston Harbor to the rough waters off Nantucket, where it safeguarded the trans-Atlantic shipping lanes. Stationed more than 100 miles out to sea, the red-hulled ship was the most remote manned lighthouse on earth.

Its signal, as strong as 500,000 candles, could pierce the densest Nantucket fog, and in clear weather it could be seen 50 miles away. For approaching ships, the beacon was the first greeting from the Eastern Seaboard, a comforting sign that the long passage was nearly at an end.

Yet after a celebrated career, the Nantucket seemed resigned to obscurity in its retirement, and slowly fell into disrepair. It was designated a national historic landmark in 1989, but for the past eight years wound up moored at the town pier in Oyster Bay, N.Y., as a would-be flagship for a stalled maritime museum.

“The irony is that this is the most famous US lightship ever built, yet it’s the most orphaned,’’ Mannino said.

As the ship sat idle, a New York maritime preservation group searched for a suitable owner who would restore the 1,000-ton titan to its former glory. Mannino, after reading an August 2008 Boston Globe article about the Nantucket, decided to take up the cause.

“I couldn’t bear to see such a maritime treasure disappear,’’ he said from the deck of the timeworn but still sturdy Nantucket yesterday, shortly after docking at a pier beside the Charlestown Navy Yard.

The ship, after some $125,000 in repairs, was able to be towed from Long Island through the Cape Cod Canal over the past two days.

Mannino will move the ship today to East Boston, where it will remain while he raises money for more extensive renovations. He estimates that a full renovation would cost about $850,000, which he hopes to raise through grants and private donations.

“It just needs some TLC,’’ he said, pointing to some peeled paint and patches of rust. “It’s in reasonably good condition for a vessel that’s been neglected as long as it has.’’

Overall, 179 lightships were built between 1820 and 1952, according to the United States Lightship Museum, a nonprofit group Mannino has established. At one point, 56 lightships were stationed at various locations around the country. Today, 17 lightships exist, eight as museums.

Mannino said he hopes the ship can take its place in Charlestown among other historic landmarks.

Life on the Nantucket was not for the faint of heart. Indeed, it was built after its predecessor, the LV-117, was destroyed by the passenger liner Olympic, killing seven crew members. The Nantucket carries a plaque in their memory.

Peter Brunk, who commanded the Nantucket in the early 1970s, gave his young granddaughter a tour of the hulking ship, taking her from the giant anchors and engines to the galley and officers’ quarters.

Now 73, Brunk said his visit was bringing back a lot of memories, most of them bad. Storms that churned up 70-foot seas, blinding fog, and the ear-splitting horn.

“I never thought I’d be celebrating it,’’ he said with a chuckle. “It was not a good job.’’

Still, Brunk was happy to see the creaky old ship end its journey where it began.