A neighborhood reflects as teen killed on court is mourned 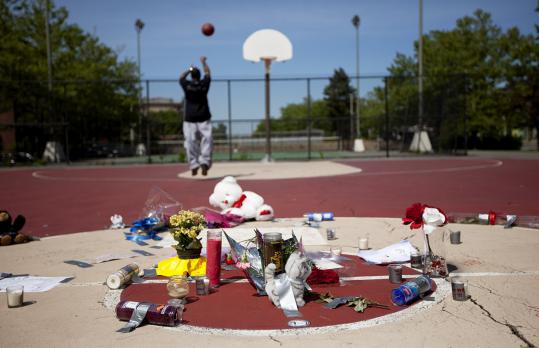 Since Saturday, the basketball court where Jaewon Martin was killed by an unknown gunman has served as a memorial, not a playground.

Instead of shooting hoops, young people have carefully placed stuffed animals, roses, and candles in the middle of the Roxbury court, marking the area where Martin and his 16-year-old friend were shot as they hung out.

But yesterday, Anthony Upchurch, a 26-year-old who lives in the nearby Bromley-Heath housing development, picked up his basketball and decided to play. It was his way of honoring the 14-year-old eighth-grader, who often played on the same court, he explained.

“It’s messed up, what happened to that boy,’’ Upchurch said between jump shots. “I’m here right now to show my respect to him, because he was out here playing.’’

Around the city yesterday, many teenagers and others talked of feeling unnerved as they stepped on basketball courts, which have often been the scene for shootings and killings. Courts that on most nice days are filled with teenagers looked empty yesterday.

At Ramsey Park on Washington Street in Roxbury, Aaliyah Williams, 15, was one of only about a dozen people playing on the three wide courts. In 2004, William “Biggie’’ Gaines, a 24-year-old volunteer youth basketball coach, was shot and killed at the park while running a practice.

“I keep looking around to make sure nothing happens,’’ Williams said. “I make sure I’m safe and can have fun. I’m always going to be concerned. If there wasn’t as much violence, I think more people would be out playing, too.’’

The killing of Martin, who would have graduated this spring from James P. Timilty Middle School, has shocked many in the city and unnerved police and community leaders. About 40 ministers, law enforcement officials, and community activists met yesterday at City Hall to discuss how to prevent a violent summer and keep parks and other recreational areas safe.

The meeting at some points turned tense, with participants expressing frustration over what should be done.

The 21 homicides Boston had recorded by yesterday was the same number as at this time last year.

The death of a teen with no criminal record or gang ties has shaken city leaders who vowed yesterday to apprehend the killer and target the city’s most dangerous criminals, whom police call “impact players.’’

Police Commissioner Edward F. Davis said he cannot comment on whether Martin and his friend, a 16-year-old high school freshman with no criminal record, were targets. The friend, whose name is being withheld by the Globe at his family’s request, was shot in the chest and arm.

“We’re very happy with the cooperation we’ve been receiving from the public so far,’’ said Davis. Police are getting closer to learning the motive behind the shooting, he said.

“Someone lost their life, and we can’t rest on our laurels when we see crime statistics going down,’’ he said. “Our land needs to be healed.’’

“I saw a family whose hearts are broken,’’ Patrick said later. “. . . I just wanted to come by and tell them, as a parent, that I am grieving with them. . . . There is a gaping hole in their hearts right now.’’

Nicole Martin said she was moved and grateful for the support she has received. “It showed me that a lot of people cared about what happened to my child,’’ she said. “I didn’t know my son could touch all these people, even though they never met him.’’

Jackie Furtado, program director at Bromley-Heath’s community center, walked out to the basketball court yesterday. Pointing to the memorial, she said it would stay there at least until after Martin’s funeral.

“It might look like a shrine to us, but it’s more than that’’ to Martin’s friends, she said. “It’s a place where they can go back and probably talk to Jaewon.’’

John R. Ellement and Martin Finucane of the Globe staff contributed to this report.